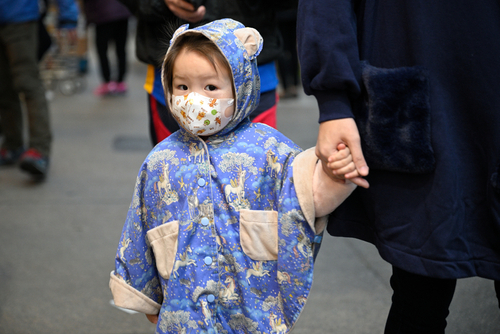 All children five years old and over will need proof of at least two COVID-19 jabs if they want to take part in normal life.

The city’s government announced that rules that applied only to children 12 and older will be extended to the younger population, citing recent COVID-19 deaths among children.

One pediatrician in the city told local media that about 20 percent of the children he treated for the virus came down with long COVID.

The city is experiencing its fifth wave with the virus and doctors said they’ve noticed a change in the cognitive abilities, insomnia, and headaches in these children. The city of 7.4 million has had a total of 1.63 million cases and 9,780 deaths.

Under the new guidelines that were announced on Thursday, all children who are 5 years old or older will need to be fully vaccinated if they want to enjoy public swimming pools, movie theaters, or restaurants.

Reports noted that some parents have hesitated to get their children vaccinated because they usually recover from the disease and the long-term and short-term health risks from the vaccines are still unknown.

TRENDPOST: Why vaccinate children when they are not in danger of dying from the coronavirus? The Wall Street Journal, in an article published 9 July 2021, reported on the findings of three studies that confirm what the Trends Journal has long detailed: the risk to children 18 and younger of dying from COVID-19 is extremely small.

Indeed, we wrote back in December that “It should be noted that among this age group, the COVID death rate is minuscule, since, according to the CDC, 99.997 percent of 1-to-20-year-olds recover from the virus (see our 15 December 2020 article “COVID LOCKDOWN: MENTAL ILLNESS BLUES”).

Now, new studies by researchers in the U.K., using records from the National Health System and data from other countries, represent some of the most detailed, comprehensive analysis of severe illness and death from COVID-19 in children.

That risk was already thought to be quite low, and the studies show it is even lower, with even fewer deaths attributed to the virus than had been suspected. Of 61 deaths of children in England who had tested positive for COVID-19, it was found that in only 25 cases was the virus the actual cause of death. For the 469,982 children who were infected during the year studied, the survival rate was listed as 99.995 percent. This is roughly consistent with what we’ve been reporting, as on 3 November 2020, in “CRUCIAL COVID DATA IGNORED BY PRESSTITUTES.”

Of those 25 fatal cases, 15 had underlying serious illnesses, and four had chronic underlying conditions. Only four appeared to have no underlying condition. Any way you slice it, however, it's the underlying factors that put one most at risk from COVID, and that goes for adults as well as children. But even with such factors, the studies concluded that, for children, the risk is "very, very tiny."

TREND FORECAST: Void of the facts and ignoring the health consequences, Presstitutes, bureaucrats and politicians continue to promote and mandate the need for young people to get the COVID jab despite reports of serious side effects on youngsters and that they are not dying from the virus.

TRENDPOST: The Trends Journal has noted that Hong Kong has enforced one of the strictest COVID-19 policies that has taken a toll on the city’s economy. (See “HONG KONG OPPRESSION: COVID ‘COMMAND CENTER’” 12 Jan 2021, “HONG KONG HYSTERIA: STRICT MEASURES TO STOP COVID-19 SPREAD PROVE INEFFECTIVE. 50 PERCENT GOT THE VIRUS” 22 Mar 2022 and “HONG KONG UNDER PRESSURE FROM CHINA TO WIN THE COVID WAR” 22 Feb 2022.)

We have noted that Hong Kong is a semiautonomous Chinese city and global financial hub. Chinese President Xi Jinping has been one of the world's last remaining holdouts to enforce a "zero COVID" policy. Beijing’s fear has been that a large outbreak in the city could spread across the mainland. Beijing did not allow Hong Kong to live with the virus.

The city’s population is decreasing, according to Nippon.com. The report said the year-end population of 7.52 million fell to 7.40 million as of the end of 2021. Business Insider ran a headline last week titled, “Hong Kong is Facing its Worst-Ever Expat Exodus. Those Leaving Say the City is Becoming No Different From Mainland China.”

"The government switched and changed its policy so many times and the decisions are made based on fear, not on evidence. Freedoms have been curtailed as a result," Marty Forth, a former resident said.

TRENDPOST: It is also worth noting that parents in Hong Kong are not the only ones hesitant to have their children roll up their sleeves for an unproven vaccine. Just 3.5 percent of U.S. children from six months to 4 years old have received at least one dose, according to the U.S. Centers for Disease Control and Prevention.

The Scientific American pointed to a Kaiser Family Foundation survey conducted in July that found more than four in 10 of parents with children in the age group said they will “definitely not” get their child vaccinated against COVID. Vaccine safety was a top concern, but more than 10 percent said they believed their child did not need the vaccine or that they weren’t that worried about COVID.