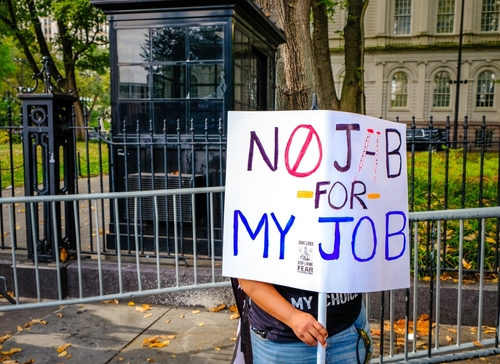 The Financial Times reported, on 14 December, that a survey of 6,000 U.S. employers indicated that nearly two-thirds expected to impose a COVID-19 vaccination mandate on their workforces, whether legally compelled to do so or not.

At the time of the FT report, Pres. Biden's proposed vax mandate, under which private companies with 100 or more employees would have to require those employees to be vaccinated, was still stalled under a ruling by a federal court—see "COURT BLOCKS BIDEN VACCINE MANDATE" (16 Nov 2021)—that has now been overruled and the mandate will proceed.

By contrast, only half of European companies surveyed intended to require vaccinations, even though vaccination rates are generally higher in Europe and some governments have imposed vax mandates on individuals. Larger companies tended to favor such vaccination requirements, whereas, globally, only 54 percent of smaller companies had such intentions.

TRENDPOST: Why are companies forcing vaccinations when the efficacy rate of the COVID Jab stopping the Omicron variant is only one third effective? This calculation is not what the mainstream media would call a “conspiracy theory” since we quote from yesterday’s CNBC’s “Health and Science” article that “The original two-dose vaccination series... offers only 33% protection against infection…,” according to real-world data from South Africa.