GOVERNMENT MANDATING TECH INTO A WEB OF SOCIAL CONTROL 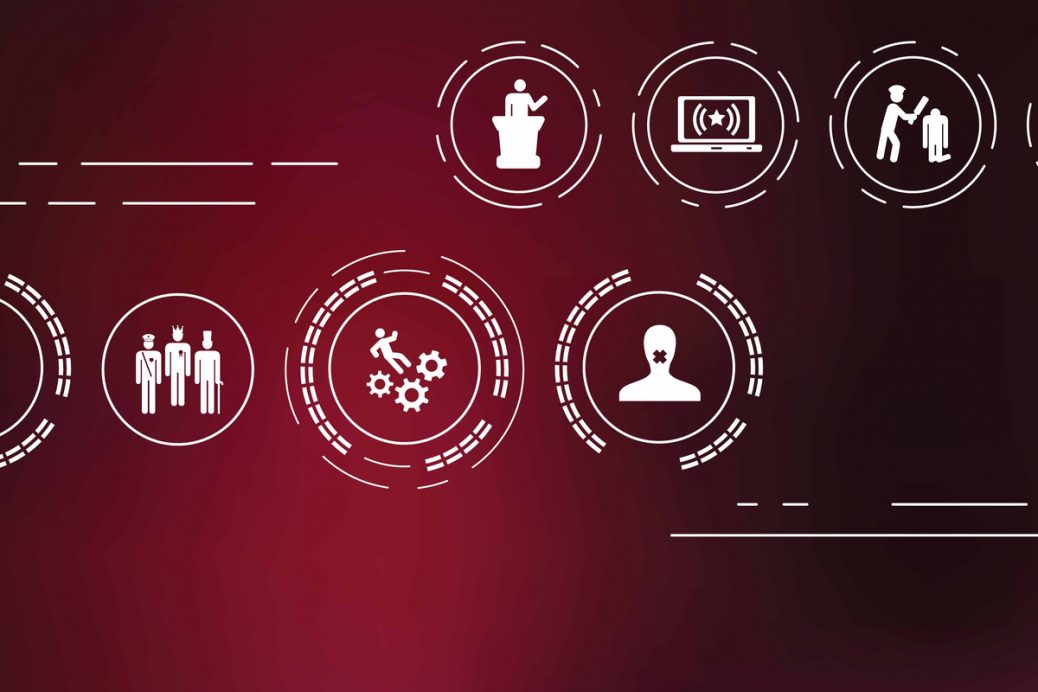 AI and Facial Recognition are coming to routine traffic stops. The technology is also being pushed for use in conjunction with drones, to track and identify people even in hard to reach places, deep in forests, for example.

Oh, and some of the same companies producing this technology are also investing in “privacy centered” decentralized social media networks, medical field diagnostic technology and more.

If it all sounds like a tech-driven decimation of human rights and Constitutional privacy protections, many advocates would agree.

They’ve been fighting against the use of facial recognition and drones against civilians, without narrow and strict laws that protect rights of citizens.

But they’re fighting a losing battle.

Companies building commercial AI tech solutions have their hooks in local and Federal law enforcement, and in virtually all other government agencies. They are quickly becoming standard partners in every industry, and are working with more and more universities to train and develop an AI industry that is fast revolutionizing the world and how it works.

In short, AI is fast becoming ascendant as a technological force, even without an official moment of “Singularity,” a term invented to describe the point at which AI becomes more capable in every respect than human intelligence.

One current AI company with deep connections to government and industry is ThirdEye.

The following is an an example of their pitch for their intrusive police facial recognition tech:

“Envision this: Your law enforcement unit has a traffic stop set up on a local highway, hoping to quickly resolve an AMBER Alert that was shared publicly earlier in the day. Officers wearing an augmented reality headset are able to run live facial scans of each person stopping at the highway barricade. Within the initial 6 hours that the AMBER Alert is sent out to the public, your unit has already identified and apprehended the kidnapper while safely returning the child home to their family.

“By combining the most powerful AR and AI tools available on the market today, law enforcement departments can reach new heights with emergency response, criminal apprehension, and overall public safety…”

ThirdEye aggressively markets its facial recognition tech to governmental and law enforcement bodies despite current legal restrictions on the technology, and significant concerns of advocates across the political spectrum.

The Trends Journal has detailed some of those concerns in articles such as “RETROACTIVE FACIAL RECOGNITION SURVEILLANCE THROUGHOUT EU” (12 Apr 2022).

By utilizing VR eyewear and using other equipment, officers operating a UAD can see live drone feeds while being situationally aware of their surroundings.

According to the company, DroneEye can empower emergency first responders to analyze emergency situations faster, including using thermal scans from an airborne viewpoint to find persons who have been stranded by natural disasters.

The company touts better outcomes for victims of hurricanes, landslides, earthquakes, forest fires, and other natural disasters, due to their technology.

But the ability—and ramifications—of being able to track, find and surveil citizens in public or private settings in almost any geographic situation, means the reach of government is quickly attaining an unprecedented new level of power.

This imbalance of power between citizens and government has human rights advocates sounding alarm bells.

The Trends Journal has noted rising issues and concerns surrounding drones (see “DRONE ATTACKS AND SURVEILLANCE ARE ON THE RISE” 16 Nov 2021).

The rubrics of “children,” “safety” and “security” are often used to sell the invasive, freedom and human rights trampling technology.

Of course, young people ravaged by gang influence and culture, exponentially rising inflows of synthetic drugs like fentanyl, and systematic grooming and medical travesties being perpetrated under the banner of “transgenderism,” is all being actively abetted by government policies regarding lax border enforcement, gender propaganda, legal system “reforms” and other policies.

Not only that.  Policies of The COVID War have devastated a generation of young people, and have resulted in an unprecedented rise in crime as people who, in the words of Gerald Celente, “have nothing left to lose, lose it.”

The Trends Journal has covered the damage in many articles, including:

All this should be kept in mind when politicians invoke “safety” to erode and subvert rights and Constitutional protections.

Incredibly, though ThirdEye is on the forefront of developing problematically intrusive tech, they recently launched a “free” decentralized metaverse based social media platform to the public with the promise of protecting the private data of users.

According to the company, advantages of the platform compared with conventional social media platforms include:

It all sounds laudable.  But then, former slogans and promises of “don’t be evil” (Google), “What’s Happening” Twitter and “Facebook helps you connect and share with the people in your life” all once sounded pretty good, too.

How Intrusive Technology is Being Regulated Into Products

Tech companies aren’t just satisfied to have their “innovations” compete in an open and relatively free marketplace.

They are actively engaged in influencing political bodies on the federal, state and local levels to mandate the implementation of their technology.

While this benefits the companies lobbying for their tech, by guaranteeing them revenue streams by forced buys of their technology, it often runs directly contrary to the democratic will of the people.

It’s another corrosion of electoral citizen power at the expense of a corporate-government nexus leveraging control via deep integrations with agencies, bureaucracies, politicians and the legal system.

There are literally thousands of technology mandates that have been lobbied for and implemented across virtually every field, impacting the rights and freedoms of citizens, often in the name of “safety / security,” “equity” and the environment. To give just a few examples:

Aspects of the ways tech companies are lobbying governments to mandate their technologies into products and society in general has been highlighted in recent Trends Journal articles including “ENERGY INFLATION AND GREEN ENERGY TYCOONS” (17 May 2022) and “YOUR DRIVING PRIVILEGES WILL BE TIED TO AI SURVEILLANCE” (5 Apr 2022).

Again, some advocates are at least trying to galvanize people to stand up to the tech-fueled destruction of their freedoms and privacy rights.

Bob Barr, former House representative and long-time critic of government intrusions surrounding the post 9/11 “War On Terror,” said the car “kill-switch” regulations are a “privacy disaster in the making,” and noted that the law is “disturbingly short on details.”

“What we do know is that the ‘safety’ device must ‘passively monitor the performance of a driver of a motor vehicle to accurately identify whether that driver may be impaired. Everything about this mandatory measure should set off red flares.”

The Trends Journal previously covered the U.S. government “BRIAR” surveillance tech initiative, and objections of rights groups like INCLO (International Network of Civil Liberties Organizations).  For more on that, see “COVERING YOUR FACE NOT ENOUGH: GOV’T DEVELOPING WHOLE-BODY BIOMETRICS TO IDENTIFY YOU” (22 Mar 2022).

Tech giants virtually all have business models that are dependent on AI technology.

Amazon’s selling platform has been progressively designed and improved to leverage AI sifting through the data of many thousands of sellers, to allow Amazon itself to develop and sell lines of products against those businesses.  Amazon has been caught illegally leveraging privileged knowledge to compete with businesses using its selling platform. (See: “AMAZON CAUGHT ILLEGALLY UNDERCUTTING COMPETITION,” 19 Oct 2021 and “AMAZON USING DIGITAL BOOK DOMINANCE TO CENSOR,” 16 Mar 2021.)

Google, meanwhile, employs sophisticated AI powered search algorithms to determine what users see when they query the company’s dominant search engine. AI helps analyze content from websites that are then indexed to appear when “relevant” to search queries.

According to tech and search optimization company Semrush, Google closely guards the workings of its algorithms, supposedly to prevent people from “gaming” search engine results. Many believe that Google itself is the biggest “gaming” culprit, using its power to literally control what the world sees and finds via its search engine.

In addition to employing AI in their own core services, Amazon and Google also offer AI powered apps to other companies via their web and business services platforms.

These companies, and other tech giants like Microsoft and Facebook are funneling billions into AI projects. But despite huge internal and partner investments (with universities and consortium partners, etc) in AI, huge corporations gain many of their biggest innovations by what Gerald Celente calls “Bigs Getting Bigger.”

In other words, tech elites are using their huge war chests to snatch up smaller, more agile technology companies with cutting-edge innovations.

The practice is so pervasive, that very few small traditionally constructed companies are able to resist the lure of buy outs when the tech giants come calling.

Unfortunately, there is almost no effective push-back or regulation by governments to keep the concentration of power in the tech industry in check.

Indeed, many of the politicians, judges and other officials that are supposed to act on behalf of the interests of their citizenry, are hopelessly compromised by their financial interests, campaign contributions, and other ties to big tech.

For more on that, see:

Given the deep infiltration and co-option of political institutions by technocratic corporations, average citizens are now facing assaults on their social and personal freedoms in every aspect of their lives.

Unfortunately, the monumental changes aren’t occurring via a process of freely choosing to implement technology that truly improves every day living, or those oft-quoted goals of “security,” “equity” and “the environment.”

Instead, technocratic elites are using a shadow play of democratic process to enrich themselves, force their technology on the masses, and exert even greater control over the entire rotten-to-the-core, rigged game.