GOING DOWN AND OUT 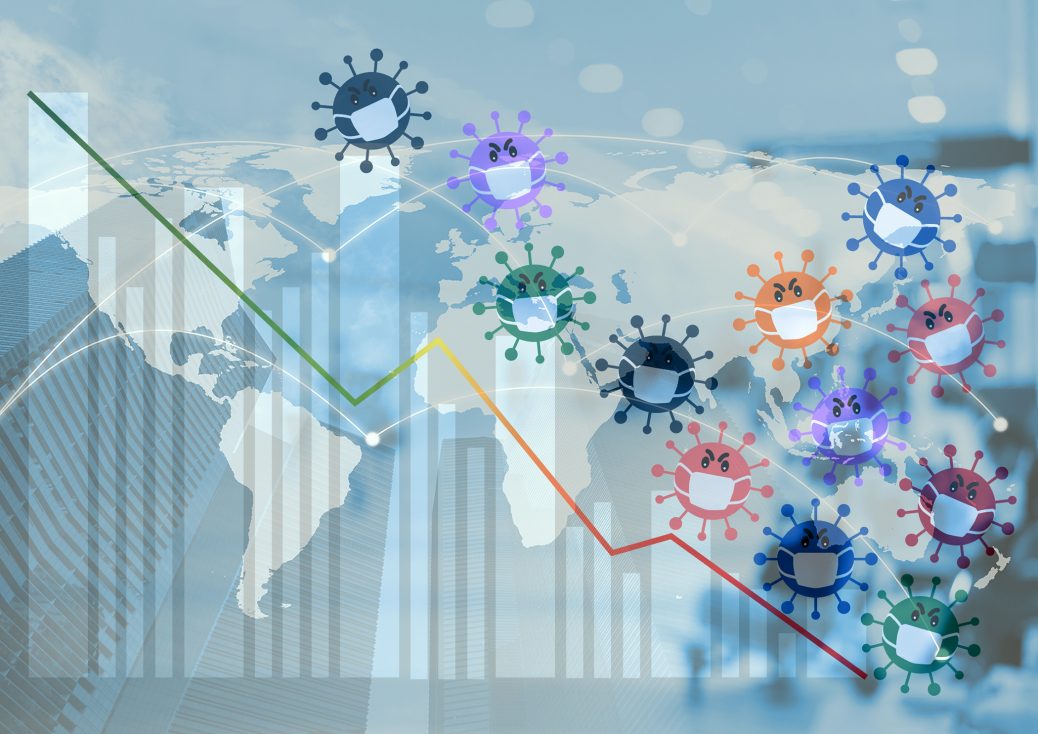 DIAMONDS LOSE THEIR SHINE. With millions out of work and weddings fallen victim to social distancing, the sale of diamonds has crashed.

Jared, “the Galleria of Diamonds,” reported sales down by 40.5 percent for the quarter ended 2 May.

Alrosa, a diamond wholesaler partly owned by the Russian government, said sales of rough and polished diamonds plummeted 89.5 percent for the period, compared to the same time in 2019; De Beers’ sales shrank by 95 percent.

However, the two companies reported cutting their production by only 42 and 54 percent, respectively.

TREND FORECAST: U.S marriage rates had already hit a record low two years before the COVID Panic locked down much of the nation and health officials warned of the risks of sexual context.

We forecast as economies dive deeper into the “Greatest Depression,” marriage rates will continue to fall across developed nations, thus making diamonds no longer “a girl’s best friend.”

As demand declines, so, too, will prices.

Typically, tourists spend about $13.5 billion staying in the city’s hotels and $10.5 billion eating in its restaurants, supporting about 400,000 workers and leaving $7 billion behind in taxes, according to marketing firm NYC & Co.

Foreign tourists are now banned from entering the U.S., people are still sheltering against the resurgent COVID virus, travelers arriving in New York City from 31 states must quarantine for two weeks, and iconic attractions from Broadway theaters to indoor restaurants remain dark.

To juice the tourist economy, NYC & Co. is promoting “hyperlocal tourism” to spur New Yorkers to visit attractions while the usual hordes of out-of-towners are absent.

TREND FORECAST: Beyond New York, tourism across the globe is in sharp decline. The word on The Street is that tourism and the hospitality sector will not bounce back until there is a vaccine, which in turn will make people less fearful of traveling.

Until that time, tourist destination nations, states, and cities will suffer sharp revenue losses, real estate values will decline, unemployment will rise (as will crime) and businesses large and small will go broke.

The cuts are expected to be made at plants in Brazil, Finland, France, Mexico, Poland, and South Africa as well as Germany.

Although the cuts are supported by IG Metall, Germany’s largest union, critics warn the cuts are the first wave of layoffs that will devastate the country’s auto industry, considered the flagship of Germany’s economy.

Metall IG has identified at least 300,000 additional jobs in German industry that are in danger. It has vowed to work with companies and the government to try to extend job subsidy payments for at least 24 months.

The union has not threatened strikes or other hostile job actions.

LAYOFFS, BUYOUTS FOR JOHN DEERE WORKERS. John Deere will lay off 35 workers at one Iowa plant but has canceled plans to fire 82 at another.

The company will continue to offer buyouts or “voluntary separations” to salaried workers, most of whom are older and higher-paid, who then could be replaced by younger workers who earn less.

Deere has laid off hundreds of workers over the last 11 months, citing a need for “organizational efficiency.”

The United Auto Workers represents 11,000 Deere employees and has worked with the company to keep plants open and workers employed throughout the economic shutdown, even though workers at some plants have contracted the COVID virus.

RETAILER ASCENA BITES THE DUST. The conglomerate that owns clothiers Ann Taylor, Lane Bryant, LOFT, and Lou & Grey may close as many as 1,600 stores as it works through Chapter 11 bankruptcy restructuring.

The company, with about 40,000 employees, had run up $1.6 billion in debt through a brand-buying spree that included Ann Inc., the parent of Ann Taylor, LOFT, and Lou & Grey. It paid more than $2 billion for Ann Inc. in 2015, just as the market for high-end women’s clothing peaked.

The number of stores that will close depends on the size of rent concessions it can negotiate with landlords, the company said.

More than two-thirds of the company’s creditors agreed to an arrangement that will reduce Ascena’s debt by about $1 billion.

The company reported a net loss of $985 million, contrasting with a profit of $1.11 billion the year before.

“In all the years I’ve been in Las Vegas, I’ve never felt more gloomy than I do now about Las Vegas in the short term,” said Robert Goldstein, Las Vegas Sands’ COO.

OIL SERVICES GIANTS SLASH COSTS, WORKFORCE. Schlumberger, one of the largest oilfield service companies, is incurring $1 billion in severance costs as it fires 21,000 of its roughly 100,000 employees, leaving it with the smallest workforce since the Great Recession.

The company also is taking $2.7 billion in impairment charges and restructuring costs.

Schlumberger’s second-quarter onshore fracking and other sales were 60 percent below those of 2020’s first quarter.

The cuts represent only 40 percent of Schlumberger’s $1.5-billion cost reduction target for this year, meaning another $900 million in cuts are in the works.

“This has probably been the most challenging quarter in past decades,” CEO Olivier Le Peuch said. “Subsequent waves of potential COVID-19 resurgence” could force the company to make additional cuts, he added.

Halliburton, another industry giant, took a $2.7 billion write-down last week, causing it to report a $1.7-billion loss for quarter ending 31 May, compared with $75 million in profits a year before. The quarter’s $3.2 billion in revenue was 45 percent less than a year earlier.

Months of aggressive cost-cutting, however, allowed it to report an operating income of $236 million for the period, driving its share price up 8 percent on the news.

Halliburton has announced at least 4,500 layoffs in recent months.

TRENDPOST: Cities and towns with economies dependent on oil and gas exploration and production will see a follow-on wave of job losses, business closures, and economic devastation.

SUR LA TABLE GOES BUST. The retailer of pricey kitchenware and cooking classes declared bankruptcy on 8 July. People adding kitchen gear as they cooked more at home could not make up for the revenue lost when stores were shut down. The company is abandoning about half of its’ 120 U.S. sites and has put itself up for sale.

MUJI MINIMIZES EVEN MORE. The minimalist Japanese design firm purveying everything from sandals to mattresses to juicers is about to get even more minimal. After filing for Chapter 11 bankruptcy on 9 July, the company announced it will close “a small number” of its storefronts and will focus its efforts online.

HERITAGE BRANDS ABANDON BRICK AND MORTAR. The owner of clothing brands Arrow, Calvin Klein, Izod Golf, Olga, Tommy Hilfger, Van Heusen, and Warner’s will close all of its 162 retail stores beginning next year. The brands will be sold through department stores, warehouse clubs, and online.

PVH Corp., Heritage Brands’ parent company, will lay off 450 employees, or about 12 percent of its workforce.

MEN’S WEARHOUSE, JOS. A. BANKS CLOSING STORES, SLASHING JOBS. Tailored Brands, owner of men’s clothiers Men’s Wearhouse and Jos. A. Banks, is shutting down 500 of the two brands’ 1,500 stores and slashing its corporate-level workforce by 20 percent.

Earlier in July, the company missed a $6.1-million payment on $600 million in debt that matures in 2022. It also reported sales were down 60 percent year-on-year in the quarter ended 30 April.

Executives blamed the trend away from formal office wear that began before the economic shutdown but gained momentum from it.

The company has not yet projected the resulting savings but has said the closings will cost it $6 million in severance pay and other costs related to shuttering the stores.

The closings will happen “over time,” perhaps as leases run out.

Most of the company’s stores have reopened but sales have disappointed. In the week ending 5 June, sales were down an average of 65 percent at Men’s Wearhouse stores and 78 percent at Jos. A. Banks.

The company’s overall sales had fallen 60 percent in the quarter ended 2 May.

Tailored Brands has been rumored to be nearing bankruptcy for several months. Its stock price jumped almost 10 percent when the closings were announced.

CATHEY PACIFIC AIRWAYS STALLS OUT. China’s largest airline has lost $1.28 billion during the first half of this year, the company said, compared to $1.3 billion in profits a year earlier.

In June, the company’s fleet of 20 planes carried an average of 900 passengers a day, about 1 percent of its traffic year-on-year. Freight traffic by weight was 43 percent less during the period.

The carrier also said it does not expect 16 of its planes “to re-enter meaningful economic service” until next summer. Grounding those planes is mainly responsible for the company taking an impairment charge worth about $2 billion.

Cathay Pacific plans to increase its flights from 4 percent of its regular schedule in June to 10 percent in August.

NEW YORK CITY’S TRANSIT SYSTEM TO CUT SERVICES, JOBS. The agency that runs the city’s subway systems, tunnels, and other traffic arteries faces a budget shortfall of $16.2 billion through 2024 and is planning to reduce subway schedules, cut staff, put off needed infrastructure projects, raise tolls, and borrow even more money to keep operating.

Although the city has partially reopened, subway ridership is holding steady at about 20 percent of its normal 5.5 million daily passengers.

The subway system will lose about $5.1 billion in fares and tolls, and another $2.1 in taxes and subsidies in 2020. Next year, the expected losses are $3.9 billion and $1.9 billion, respectively.

The transit agency also plans a “congestion pricing schedule,” charging more for drivers using bridges and tunnels to enter and leave Manhattan during peak traffic times, a move that could bring in $1 billion annually.

TREND FORECAST: As we have continually noted as the lockdowns intensified, the economic fallout will prove devastating to nations, cities, and states.

In the U.S., long suffering from a rotting infrastructure and antiquated mass transit system, the sharp decline in passengers will not bounce back under the New ABnormal climate of fear of human contact.

Raising fares will further shrink its customer base as less people will be able to afford to pay more. And, as more people and students work from home, ridership levels will decrease.