GET VAXXED, GET COVID: THE ONES THAT GOT IT BRAGGED THEY GOT THE JAB 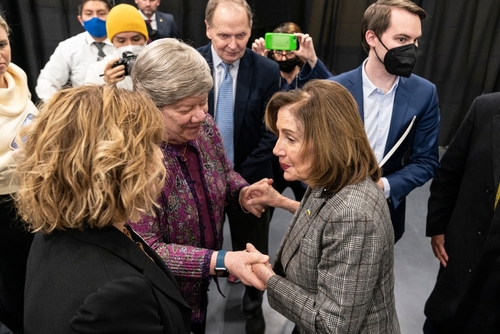 We’re almost at the point where it is no longer even news when so-called “fully vaxxed” politicians and “celebrities” (arrogant actors) announce they came down with COVID-19—and then pitch the vaccine’s effectiveness to the public.

Just like the good mouthpieces they are, both announced their infection by claiming they were grateful to be vaccinated and boosted.

Pelosi’s office said in a statement, “The Speaker is fully vaccinated and boosted, and is thankful for the robust protection the vaccine has provided. The Speaker will quarantine consistent with CDC guidance, and encourages everyone to get vaccinated, boosted and test regularly.”

On Wednesday, Garland and Commerce Secretary Gina Raimondo both announced that they came down with infections.

Garland, who is fully vaccinated and boosted, was not symptomatic, his office said. He has been isolating at home. Raimondo tested positive on Wednesday and was “experiencing mild symptoms.”

All three attended the Gridiron Dinner in Washington. Tom DeFrank, the Gridiron Club president, announced Saturday that there were 67 cases out of the hundreds who attended. Eric Adams, the mayor of New York City, also tested positive.

As for arrogance and stupidity about getting the jab and getting sick, Schiff (or is it Shit) tweeted “I’m feeling fine, and grateful to be vaccinated and boosted... And remember, please get vaccinated!"

A week earlier, William Burns, the CIA director, and Jen Psaki, the White House spokeswoman, announced their own infections. It was the second time that Psaki came down with the virus. (See “AMERICAN MEDIA: HOW LOW CAN YOU GO? WHITE HOUSE PRESS PSAKI JOINS THE PRESSTITUTE CLUB?”)

TRENDPOST: It has been widely reported that vaccines are becoming less effective and for a shorter period of time when preventing infection from variants like Omicron, and the now-dominant Omicron sub variant called BA.2.

"By this fall, we may be on to a new variant. It could be sigma. It may be tau. There may be something new that may be circulating that we'll have to deal with," Peter Marks, director of the Food and Drug Administration’s Center for Biologics Evaluation and Research, told NPR in an interview. "We're going to have to make a good guess at what may be most effective.”

Nature magazine pointed out that researchers have been aware that the BA.1 subvariant “evades much of the protection that mRNA vaccines offer against mild-to-moderate disease.”

One researcher said BA.2 could be even more challenging for scientists with its ability to evade the vaccines.

Get Sick, Try and Sell Vaccine

The Trends Journal has reported extensively on the number of fully vaxxed celebrities and politicians who still come down with the virus, and then use their announcement to push the vaccine.

It has been the constant appeal from celebrities, politicians, Big Tech, and corporate media to get people to willingly roll up their sleeves for the jab. (See “CELEBRITY SELLOUTS SELL COVID VAX.”)

When that didn’t work, President Joe Biden announced a mandate for some federal workers and employees at larger companies, which has faced legal challenges.

There might not be a better example of the vitriol that vaccine extremists have toward those who hesitate to take the jab than actor Sean Penn.

Penn has emerged in the news lately due to his warmongering in Ukraine and his effort to obtain bigger and deadlier weapons for Kyiv—including fighter jets.

On more than one occasion, the “Mystic River” actor singled out those without the vaccine and told them they should stay home from movie theaters until they comply.

“And I do believe it should be mandatory, like turning your headlights on in the car at night,” he told CNN in an interview back in 2021.

It seems that Americans have already peaked in their willingness to take a vaccine, which is likely due in large part to less-severe variants and possible side effects.

About 66 percent of the U.S. is considered vaccinated, but only 30 percent have received a booster shot.

The Food and Drug Administration last month approved a second booster for those considered to be at higher risk for complications due to COVID-19, including adults over the age of 50 and individuals with compromised immune systems over the age of 12.

The Colorado School of Public Health said age is the top risk factor since “immune response” to vaccines for people 65 and older are “less robust and the older group accounting for 81% of U.S. COVID deaths in 2020.

For the younger, healthy group on the spectrum, the booster decision is less clear-cut and reverts to weighing individual risks.”

The Trends Journal has reported on the never-ending cycle of vaccinations and how they have become cash cows for the Big Pharma. (See “SELLING BOOSTER SHOTS, CDC’S WALENSKY SAYS ‘FU’ TO AGENCY ADVISERS,” “PFIZER: DRUG DEALERS ON PARADE” and “PFIZER DRUG LORD PUSHING YEARLY COVID JABS. CALLS THOSE WHO WON’T SWALLOW BULLSHIT, ‘CRIMINALS.’”)

TRENDPOST: We reported in our 9 November issue that the global COVID-19 war is entering its next phase and drug makers are adapting. Both Pfizer and Merck have announced antiviral drugs to improve survivability for patients. Pfizer—already the lead seller of the COVID Jab—has contracts to supply other countries and expects Paxlovid to add $5 billion to its yearly sales; its stock rose 11 percent on news of the new pill, whereas Merck's stock price fell. (See “DRUG COMPANIES CASHING IN ON COVID” (11 May 2021); “MORE COVID JABS, MORE BIG BUCKS FOR DRUG LORDS.” (21 Sep 2021).