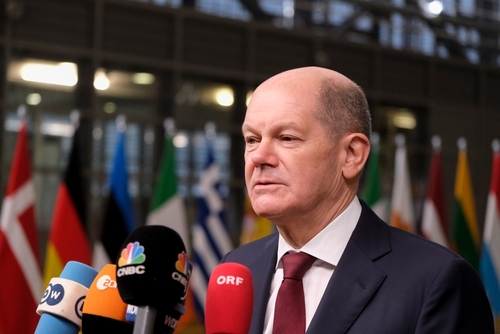 “We are supporting Ukraine with arms supplies and will continue to do so as long as Ukraine needs our support,” he said.

Berlin is set to provide Kyiv with three multiple launch rocket systems, according to The Associated Press. Berlin will transfer three M270 medium-range artillery rocket systems along with ammunition.

France 24 accused Scholz of dragging his feet on these weapon promises. Scholz brushed off the criticism and said there is no sense in sending complicated weapons without first training Ukrainians on the systems.

Dmytro Kuleba, the Ukrainian foreign minister, told Italy’s La Repubblica: “There are countries from which we are awaiting deliveries and other countries for which we have grown tired of waiting. Germany belongs to the second group.”

Marcel Dirsus of the Institute for Security Policy at Kiel University, told the outlet that it seems Berlin is “content to take a middle-of-the-road approach where they're doing enough to avoid the most severe criticism, but they're not really taking any initiative to go beyond that.”

German Defense Minister Christine Lambrecht told reporters that the training of Ukrainian troops on howitzers is just about wrapped up, Reuters reported.

"The training on the Panzerhaubitze 2000 will soon be completed so that it can be used in battle in Ukraine," she said.

TREND FORECAST: Despite all the military tough talk, we maintain our forecast that despite the billions of weapons the United States and its allies have sent, and continue to send to Kyiv, Ukraine will not defeat Russia.

TREND FORECAST: Who will win the Ukraine War? We said Russia would since the onset while the U.S. and its allies said the opposite. See:

TRENDPOST: RT summed up the Ukraine War: “Russia attacked Ukraine in late February, following Kyiv’s failure to implement the terms of the Minsk agreements, first signed in 2014, and Moscow's eventual recognition of the Donbas republics of Donetsk and Luhansk.

The Kremlin has since demanded that Ukraine officially declare itself a neutral country that will never join the U.S.-led NATO military block. Kyiv insists the Russian offensive was completely unprovoked and has denied claims it was planning to retake the two republics by force.”

Macron, Draghi, and Scholz took an 11-hour train ride to Kyiv to meet with Zelensky and show a united front of European support.

"We saw a devastated city and traces of barbarism. And also the heroism of Ukrainian men and women who stopped the Russian army when it went to Kyiv. Ukraine is resisting. She must be able to win," Macron said after a tour of Irpin, which is a Kyiv suburb.

Macron has been one of the few world leaders in touch with the Kremlin since the war broke out. He was on the receiving end of intense criticism earlier this month when he said that Putin should not be humiliated in Ukraine.

He evidently changed his tune.

He visited French troops stationed in Romania before his visit to Kyiv and said the war will ultimately end after negotiations. The Wall Street Journal reported that France and Germany have spoken about negotiating for a peaceful resolution while Eastern European nations see the only acceptable result as an outright Russian defeat.

Luhansk Gov. Serhiy Haidai told the Associated Press that the visit would not yield progress if the leaders ask Ukraine to sign a peace treaty with Russia that involves giving up territory.

“I am sure that our president, Volodymyr Zelenskyy, is not going to make concessions and trade our territories. If someone wants to stop Russia by giving them territories, Germany has Bavaria, Italy has Tuscany, the French can concede Provence, for instance,” he said.

TREND FORECAST: Again, with not a mention of peace or the reality that Ukraine will not defeat Russia, Biden and NATO keep ramping up the killing machine. U.S. President Biden made the non-negotiation of peace perfectly clear when he said right after the Ukraine War began that  “We’re going to make sure Ukraine has the weapons to defend themselves against an invading Russian force," he said, vowing to defend "every inch of NATO territory."

Yes, after being unable to win a single war it has started since the end of World War II, Biden’s war mongering continues to be cheered by Congress and applauded by the mainstream media.

And we forecast Putin’s war against Ukraine will be a Russian victory. And it is pure idiocy to state that Putin “... hoped to dominate Ukraine without out a fight.” Of course he expected a fight. But the media and the mass of Americans swallow Biden bullshit, just as they have marched off to every war the U.S. has launched since the end of WWII... including getting jabbed to fight the COVID War.