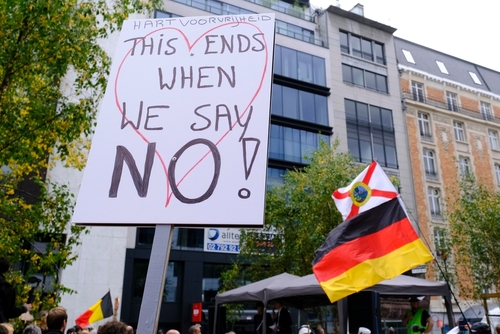 Germans will have to produce a negative virus test or present evidence of a booster shot to access dining establishments across the country.

Ingrid Harges, the chief executive of the German Hotels and Restaurants Association, told DW.com that the new rules are a “disaster for many businesses.” (See “GERMANY SLIDING TOWARD RECESSION,” “GERMANY: NO JAB, NO FREEDOM” and “GERMANY'S 2021 GROWTH FORECAST SLASHED.”)

Protests broke out on Saturday in Frankfurt, Düsseldorf, and Magdeburg to voice opposition to the new restrictions. About 16,000 people joined a protest in Hamburg and some held signs critical of the vaccination campaign for young people. The signs read, “Enough! Hands off our children!”

One of the protesters wore a Star of David that read “unvaccinated.” The protesters in Magdeburg brought trams to a halt and blocked some roads, The Daily Sabah reported.

Customers had previously been forced to show proof of vaccination or recovery to enter these establishments, but the new mandate focuses on booster compliance.

Karl Lauterbach, the country’s health minister, condemned the protests and said the relatively small groups were “willing to wipe all scientific knowledge off the table and voluntarily enter a bubble of bogus truths.”

TREND FORECAST: These re-imposed COVID War measures will further drag down economic growth while escalating populist anti-vax, anti-establishment movements. Ignoring the facts of broad based citizen outrage against draconian measures being imposed upon them by politicians and bureaucrats, the media will continue to moronically label those fighting for freedom as right-wing conspiracy theorists.