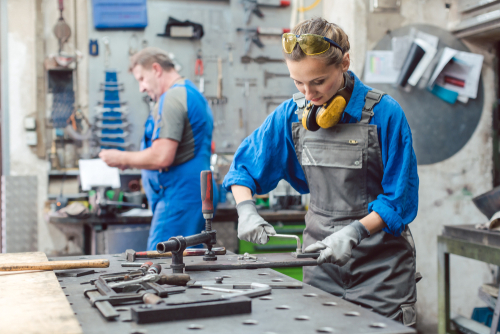 Germany gets about a third of its natural gas from Russia, which has variously slowed or halted deliveries in what most analysts assume is punishment for Germany’s participation in Western sanctions against Russia for its Ukraine war.

Partly due to rising natural gas prices, Germany’s inflation rate sped up to 8.5 percent in July, compared to 8.2 percent the month before.

Germany’s GDP has failed to grow in a meaningful way in more than five years, The Wall Street Journal noted, and has shown the weakest post-COVID recovery of any major economy.

About 25 percent of German jobs depend on manufacturing for export, compared to 6 percent in the U.S.; Germany’s domestic market is too small to absorb more than a small amount of factories’ output.

However, Germany’s export economy has stagnated since 2017, with industrial output shrinking by 15 percent since then, due partly to high costs domestically and China’s rise to global manufacturing dominance.

Now one in six German manufacturers are curtailing or shutting down production due to runaway energy prices.

In addition, the country is predicted to lose five million workers over the next decade as the population ages.

“Germany is in danger as an industrial location,” Bernhard Jacobs, managing director of the country’s Sheet Metal Forming Industry Association, told the WSJ.

Across the European Union’s other 19 countries, second-quarter GDP grew 0.7 percent above the first quarter’s output.

However, consumer prices rose at a record annual rate of 8.9 percent in July, outpacing June’s record inflation pace of 8.1 percent.

Because growth figures are not adjusted for inflation, the 0.7-percent increase in the value of business activity translates to a sizable reduction in the actual volume of goods and services purchased.

“We expect that to result in a mild recession starting the second half of the year,” he warned.

TREND FORECAST: The European Central Bank has raised its interest rate to zero from -0.50 percent. (See “ECB Raises Interest Rate By a Half-Point” in this issue.)

Offering investors no interest is better than charging them to store their money, but it still is no incentive to invest.

Investment capital will continue to flow to the U.S., France, and other economies that offer a combination of relative stability and superior interest rates.

And considering the dire economic conditions of Europe, should they raise rates to counter inflation, which is running at 8.6 percent, they would crash the already weakened economy... which, as with other nations, was artificially pumped up with cheap money and government infusions.

Today, the euro slumped to near parity against the dollar. Therefore, the lower the euro sinks the more it costs to buy products and services... and the higher inflation rises.