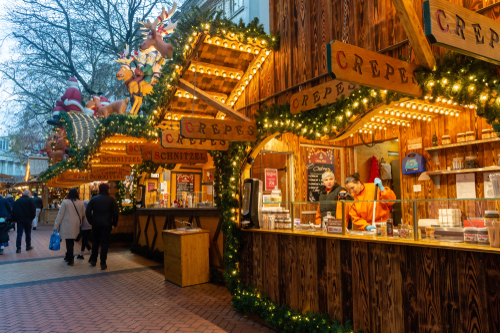 Germany’s economy will contract by 0.5 percent this quarter, compared to the third, and either stall or shrink further in 2022’s first three months, according to Germany’s Ifo Institute for Economic Research.

An economy is officially in recession when it shrinks for two successive quarters.

"Ongoing supply bottlenecks and the fourth wave of the coronavirus are noticeably slowing down the German economy," Timo Wollmershäuser, Ifo’s chief forecaster, said in a statement announcing the institute’s study.

"The strong post-pandemic recovery that was originally expected for 2022 still hasn't materialized," he noted.

Although Ifo expects Germany’s economy to grow again in next year’s second quarter, the institute cuts its overall outlook for Germany’s GDP growth in 2022 from 5.1 percent to 3.7.

TREND FORECAST: Remember, Germany is the world’s fourth largest economy and it is on the brink of recession.  The dour outlook comes as countries around the world brace to fight COVID War 2.0 Omicron variant.  This in turn may add pressure to stretched global supply chains and force central banks to rethink plans to withdraw support for the economy. Thus, more cheap money equals more inflation.

Also pushing down its economy, access to restaurants in Germany are limited to people who must provide proof of vaccination or recovery. And as of next Tuesday, whether indoors or outdoors, a maximum of 10 people who have been vaccinated or recovered from COVID-19 can attend a private gathering. And if an unvaccinated person is present, only one other person outside the household would be able to attend.

Adding to the economic downward pressure, spectators will be banned from sporting events, cultural shows, concerts and other large public events.

We also forecast that protests against these mandates will increase and there will be the emergence of anti-establishment, populist movements.