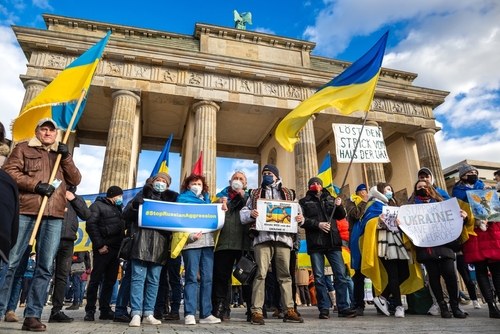 Is German Chancellor Olaf Scholz, picking up where Adolf Hitler left off, in launching a war against Russia?

Back in 1941, following signed political and economic pacts between Germany and the Soviet Union, Hitler broke the agreement and launched Operation Barbarossa—the three million German troop invasion which was the largest in the history of warfare—to conquer and control Russia.  An estimated 24 million Russians died during WWII, according to the National WWII Museum.

At the beginning of the Russian invasion of Ukraine, instead of sounding like a war hawk from the U.S., Scholz condemned the invasion and vowed to send military helmets to Ukraine while other countries were already sending “defensive” weapons, like there is such a thing.

Germany was even mocked at one time when it refused to allow Britain to use its airspace to deliver anti-tank missiles to Kyiv.

Bob Dylan famously wrote, “The times, they are a’changin’.” Indeed, they are.

Scholtz has now emerged as one of the most vocal critics of Russia and joined the ranks of President Joe Biden and U.K. Prime Minister Boris Johnson when it comes to war rhetoric. Last week, while addressing Germany’s federal parliament, Scholtz spoke about the war and said, “We All have one goal: Russia must not win this war. Ukraine Must survive.”

He said Europe can help Ukraine by continuing to accept millions of refugees and providing Kyiv with economic funding “and, indeed, the supply of weapons, including heavy weaponry.”

The U.S. Senate just approved $40 billion more in aid for Ukraine and G7 countries approved nearly $20 billion in economic aid, which we point out in this week’s issue.

German Defense Minister Christine Lambrecht told Ukraine that Berlin will send its first shipment of 15 Gepard tanks in July. A government source from Germany told Reuters that these tanks will be supplied with a sufficient amount of ammunition.

The source told the outlet that the ammunition would fulfill about 100 combat loadings. One loading is good for 25 targets, the source said. (See “WAR IN UKRAINE ECONOMIC OVERVIEW” and “BANNING RUSSIAN GAS WOULD COST GERMANY €165 BILLION, BANK WARNS.”)

The shipment will include training support by the German Armed Forces, DW.com reported. The German paper said the Gepard is an effective tank with anti-aircraft capabilities and armed with twin 35-mm guns that can be used against aircraft and helicopters at altitudes of up to 11,500 feet.

In March, Scholz agreed to send Kyiv 1,000 anti-tank weapons and 500 Stinger missiles. He also announced that Germany would increase its own military spending due to the threat from Russia.

Germany will now spend $112.7 billion—or 2 percent of its GDP on its military each year.

Marcel Dirsus, a German political scientist and fellow at the Institute for Security Policy at Kiel University, told The Washington Post, “This might be one of the biggest shifts in German foreign policy since WWII. There has been an awakening, not just by the political class, but also by ordinary voters.”

WSWS.org reported that Scholtz has tried to downplay the weapons transfers and brushed off criticism that these shipments are just prolonging the war.

“Helping a brutally attacked country to defend itself is not an escalation, but a contribution to warding off the attack and thus ending the violence as quickly as possible,” he said, before assuring Germans that there is nothing afoot that will “turn NATO into a war party.”

TREND FORECAST: Scholtz, like other European leaders, must be listening a little too closely to President Joe Biden and his war-hawk administration.

The Trends Journal reported that U.S. Secretary of Defense Lloyd Austin showed his hand a few weeks back when he mentioned dreams about seeing a weakened Russia as a result from this conflict. That dream seems too much for even Scholtz to resist.

The coup de grâce is a Russian defeat on the battlefield, a retreat, and regime change inside the Kremlin.

But as the war drags on, minus a wild card such as a nuclear war—we maintain our forecast that nations will run out of money and military equipment to give to Ukraine and Russia will win the war and get what it fought for.