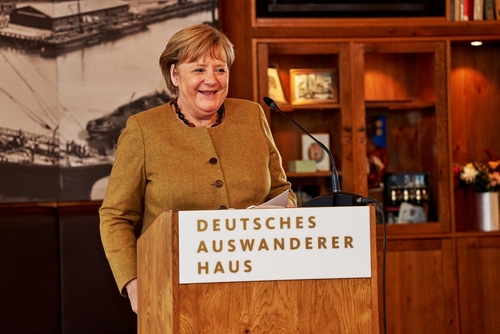 The vaccine mandate could be enforced as soon as February 2022.

Go back one year ago when the Drug Lords, politicians, “health officials” and Presstitutes were selling that two COVID Jabs would do the job to kill the virus and their inoculations had a 96 percent efficacy rate.

Forget about it. Her Highness Merkel declared that even those who received both shots will lose their freedom status after the ninth month and will be compelled to take booster shots...which will in turn, greatly boost the profits of the Drug Lords. (See “BIDEN’S BOOSTER PLAN: VAX YOU!,” “SELLING BOOSTER SHOTS, CDC’S WALENSKY SAYS ‘FU’ TO AGENCY ADVISERS.”)

Olaf Scholz, who is replacing Merkel, agreed with her decision to ban unvaccinated individuals from venues except for supermarkets and pharmacies. And making up the numbers, the unvaccinated are only allowed to meet with two people (not one, three, five or seven) from another household.

Merkel, a vocal proponent of pushing the vax, declared that “Every shot helps.”

Merkel’s call comes at a time where more European countries are taking new measures to force their citizens to be vaccinated. Greece, a country where 62 percent are vaccinated, will fine residents 60 and over who are unvaccinated $113 a month until they take a shot. Ursula von der Leyen, the European Union Commission president, also said that it was about time to think about “mandatory vaccination” within the EU.

Prime Minister Kyriakos Mitsotakis said about 580,000 Greek citizens over 60 have not been vaccinated, and he says they’re the ones who require hospital intervention.

“I felt a duty to stand by the most vulnerable, even if it might temporarily displease them,” he said.

Xenophon Contiades, the president of the Center for European Constitutional Law in Athens, said he agrees with restrictions for the unvaccinated, but questioned the legality of forcing vaccine mandates.

“In my opinion, the imposition of fines on people who do not want to get the vaccine is unconstitutional, because it is an excessive and inappropriate restriction of an individual’s autonomy—regardless of how angry we are because of their attitude,” he said.

TRENDPOST: There are a number of reasons why so many are hesitant to get the COVID Jab. One is that it is the first gene therapy injected in humans that was rushed to market under a project called “Operation Warp Speed.” Another is the fact that the disease is entirely survivable by most of the people it infects, and those who die from it are suffering from pre-existing comorbidities and/or the elderly, who are suffering from illnesses.

Indeed, according to data quoted by the German news media, DW, all German COVID “deaths reported since mid-March of 2020, after vaccines began to be rolled out for vulnerable populations, 86% were 70 and older, while the median age was 84. The median age of those with a fatal course of the coronavirus is currently at 83 years.”

There it is...83 years of age. And what is the life expectancy in Germany? According to the World Bank, 80.94 years.

Yet, governments impose strict, “No Vax, No Freedom” draconian mandates rather than taking care of those most susceptible to the virus. Furthermore, NEVER, EVER, do establishment “health officials” recommend natural healing remedies, or for people to get in the best physical, mental and spiritual help to build their immune system.

TREND FORECAST: The Trends Journal had forecast they would occur and has been reporting on anti-lockdown protests in major cities that are escalating around the world. And is this issue, for the latest updates, see: “PROTESTERS LASH OUT AT NEW COVID-19 RESTRICTIONS.”

We have also noted that the “Greatest Depression” has been accelerated by knee-jerk reactions from politicians to fight the COVID War that will destroy the lives and livelihoods of hundreds of millions, if not billions.