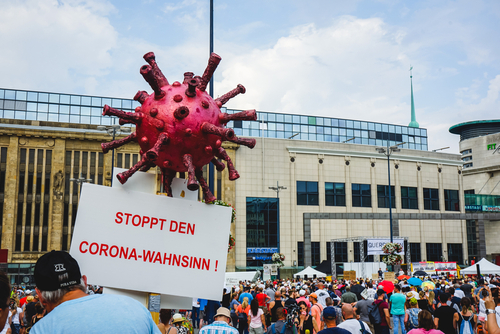 German restaurants and hotels are bracing for new challenges after the government approved stricter COVID-19 guidelines that require booster shots for individuals who would have previously qualified to enter these venues in the country.

“The situation is once again dramatic for many of our members,” Ingrid Hartges, the director of DEHOGA, Germany’s Hotel and Restaurant Association, told DW.com.

Hartges was referring to the country’s new “2G-plus rule,” which means those who have been vaccinated or have recovered from the virus must now prove they’ve received a booster shot to enter certain venues in the country.

Hartges said the science does not support the move and pointed to data from the Robert Koch Institute that indicated that the country’s hospitality industry was not a driving force in spreading infections. The subsequent lockdowns have devastated the hospitality industry, stripping 42 percent in sales compared to 2019, the report said.

About 71 percent of Germans have received the first two jabs and 41 percent have taken a booster. Chancellor Olaf Scholz, who recently told voters that "anyone who orders leadership from me will get it," has recently supported a vaccine mandate in the country, which sparked protests on Saturday in Hamburg and Düsseldorf. Thousands lashed out against the possibility of forced vaccinations.

TRENDPOST: Such protests are nothing new, even though most of the mainstream media tends to ignore, downplay or trivialize them; the protests are hardly ever framed in the context of protesting authoritarianism and resisting governments that want to dictate what their people should think and decide. Not so Trends Journal; see "VAX WAR: THE SHOT HEARD AROUND THE WORLD" (23 Nov 2021) and "ANTI-LOCKDOWN FIGHTERS GRAB SEATS IN AUSTRIA'S REGIONAL PARLIAMENT, AS PREDICTED BY TRENDS JOURNAL" (5 Oct 2021).

TREND FORECAST: As we have long forecast, the stricter the government mandates, the stronger the growth of anti-vax/anti-establishment populist movements.

Moreover, these protests from citizens who say it is their freedom to inject into their bodies what they wish rather than doing what the government is forcing them to do will gain in strength as economic conditions deteriorate.

Indeed, the Trends Journal has reported extensively on the coronavirus outbreak and the damage it has done to the German economy. (See “GERMANY SLIDING TOWARD RECESSION,” “GERMANY’S FACTORY OUTPUT FALLS FOR THIRD STRAIGHT MONTH,” “GERMANY: ECONOMY HITS THE BRAKES,” and “NEW GERMAN CHANCELLOR: ANOTHER POLITICIAN WHO LIED HIS WAY INTO OFFICE.”)

The U.K.'s Express newspaper reported that a recent study found that 14 percent of German firms polled said they feared for their existence due to the coronavirus outbreak. Munich-based Ifo Institute for Economic Research surveyed 9,100 companies in December across all sectors. Last month, 17.1 percent of firms in the retail sector expressed fears over their future, the paper said.

Thomas Mertens, the chairman of Germany’s Standing Committee on Vaccination (STIKO), spoke out against a vaccination mandate, Politico reported.

“This divides society, too much pressure is built up,” he said.

Scholz has now been criticized for not being assertive enough to push for the vaccine mandate.

Jürgen Falter, a professor of political science at Mainz University, told Politico that the new chancellor seemed to have underestimated the resistance from lawmakers in the country when he first mentioned the mandate.

"He cannot be sure that the coalition will follow him and thus does not want to look like a weak chancellor," Falter said. "He is renouncing leadership as the chancellor of all Germans because coalition peace is more important to him in the current situation."

TREND FORECAST: The Trends Journal has reported extensively on economy-killing lockdowns and protests that attract thousands in an attempt to reclaim their freedom and right to earn a living for their families.

Governments and media have tried to marginalize anyone opposed to these dictates as right-wing extremists. Or if they were in the United States, as detailed in this Trends Journal article “BIDEN HOSPITAL VAX MANDATE LOSING SUPPORT,” Donald Trump supporters. Also see: “ITALIANS PROTESTING VACCINE MANDATES DENOUNCED AS FASCISTS,” and “ITALIANS TAKE TO THE STREETS TO RAIL AGAINST WORKPLACE ‘GREEN PASS.”)

Again, we maintain our forecast for strong anti-vax, anti-establishment, anti-immigration political movements to sweep across the continent. And, the faster economies decline the faster these movements will rise.

And as for Germany, as we have noted in our Trends Journal, the nation is teetering on Recession. Thus, the deeper economies decline, the faster, higher and stronger these anti-establishment movements will rise.