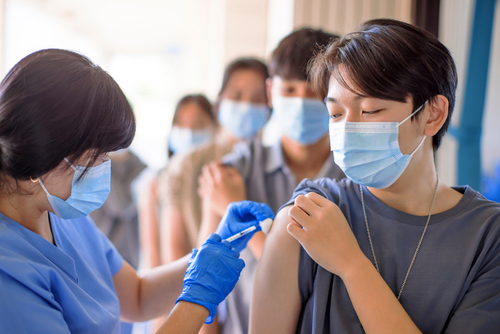 Lori Lightfoot, the Democrat mayor of Chicago, is fully vaccinated and boosted against COVID-19. But that didn't keep her from testing positive for the virus, as she announced on 11 January, according to reporting the same day by The Hill.

The mayor said she was experiencing cold-like symptoms, but otherwise feels "fine." She will continue to work from home while following CDC guidelines for isolation. She not only credits having been vaccinated and boosted for the relative mildness of her symptoms, but says that the case serves as "an urgent reminder" for folks to get vaccinated and boosted, "as it's the only way to beat this pandemic."

Doubling down on the get vaxxed, get COVID and selling the bullshit that the vaccines, which were sold to the public as having a 96 percent efficacy rate, work, America’s political idol,  Alexandria Ocasio-Cortez, who is fully vaxxed and boosted made the “news” with her declaration:

“Welp, so it happened. Got COVID, probably omicron. As of today I am thankfully recovered and wrapping up quarantine, but COVID was no joke. For a while I’ve noted the term “mild” is misleading when the bar is hospitalization and death. Even “mild” cases can result in long COVID, which includes a range of conditions like cognitive impairment, POTS, & chronic fatigue.”

Again, like Lightfoot, she too spews out the line of the importance of getting vaxxed, even though the vaxxed are getting the virus. And she says she “probably” got Omicron. Probably? How about “probably” the vaccine is useless and you got COVID-19? Yet, the media sells this stupidity and the public buys it.

TRENDPOST: Are you following this? The fact that the mayor and congresswoman tested positive despite being fully vaxxed and boosted can't be permitted to undermine the official narrative that all those jabs are the only way to protect ourselves from the virus.

And, rather than admitting the jab does not work, they say without it they would have been sicker, they tell the public how effective the vaxxes are and blame those who are not jabbed for spreading the virus and endangering others.

TREND UPDATE: Included in the list of pro-vax champions who got fully vaxxed and boosted but still got the virus, was Defense Secretary Lloyd Austin, which we noted in last week’s Trends Journal.

Keeping that military spirit of “you must get vaxxed or resign because the vax is so great, yesterday it was reported that fully jabbed and boosted General Mark Milley, chairman of the Joint Chiefs of Staff, also got the virus. The Pentagon said another member of the Joint Chiefs who got two shots and a booster also got the virus, but they refused to tell We the People of Slavlandia who it is.

Jerking Off in Public

In another rather high-profile case of a breakthrough infection in a person fully vaxxed and boosted, The Wall Street Journal reports, on 13 January, that Jim Justice, the Republican governor of West Virginia, has not only tested positive but is suffering from symptoms that, unlike Mayor Lightfoot's, can hardly be described as "mild."

The 70-year-old governor woke up on 11 January with congestion and a cough, which worsened by that afternoon to include a high fever, headache, elevated blood pressure and heart rate. The governor describes himself as feeling "extremely unwell," and in addition to isolating he started receiving monoclonal antibody treatment on Tuesday night.

TRENDPOST: While such treatments are neither new nor unheard of—see "REGENERON TOUTS EFFECTIVENESS OF 'PASSIVE VACCINE' ANTIBODY COCKTAIL" (2 Feb 2021)—they are neither highly publicized nor promoted, nor are they easy to come by. Once again, the premise that there are treatments that may be viable alternatives to the vax and booster program we've been sold is almost tantamount to heresy.

But, when one has the resources available to a governor, you can bet that this particular patient is telling his doctors, "I want you to throw everything at this that you can get your hands on, and be quick about it!"

One of the governor's doctors, however, has stated that he expects the governor to recover quickly, saying that "without the immunity afforded by those vaccines, his outcome could be much worse."

So, do you see how this works? No matter how serious are the symptoms the governor is experiencing, if he hadn't had the shots, it would be even worse. And the governor's recovery will be credited not to any other treatments, but to the vaccines and boosters.

Gov. Justice has been, like Mayor Lightfoot, a big promoter of vaccinations, and has been critical of those whom he said have spread "misinformation" about COVID-19 vaccines. He even sent a letter to Pres. Biden last week requesting that the president direct the Centers for Disease Control and Prevention to authorize a fourth shot for some West Virginians.