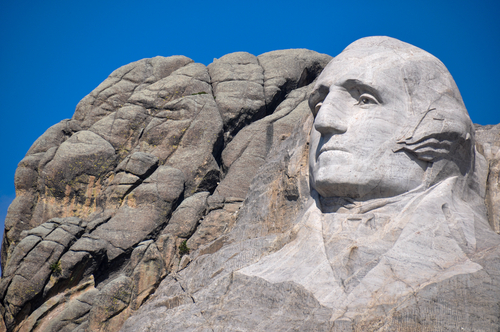 Today, words of America’ Revolutionary War general and first President, George Washington, are blasphemous and are never part of the mainstream media narrative or spoken by political or business leaders: "It is our true policy to steer clear of permanent alliance with any portion of the foreign world."

The address was published on 19 September 1796 in the Philadelphia Daily American Advertiser and was intended to guide future generations.

Alexander Hamilton and James Madison helped Washington compose the address that warned about geographical sectionalism, political factionalism, and “permanent alliances with other countries” that he believed would inevitably lead to the subversion of the U.S.’s national interest.

He told Americans that his recommendations should be read as though given by a parting friend.

Washington warned against relying on foreign countries and said, “The great rule of conduct for us in regard to foreign nations is, in extending our commercial relations, to have with them as little political connection as possible. So far as we have already formed engagements, let them be fulfilled with perfect good faith. Here let us stop.”

Paris tried to get the U.S. to side with France in its fight against Great Britain, and Washington wrote that there is nothing more “essential than that permanent, inveterate antipathies against particular nations, and passionate attachments for others, should be excluded; and that, in place of them, just and amicable feelings towards all should be cultivated.”

“The nation which indulges towards another a habitual hatred or a habitual fondness is in some degree a slave. It is a slave to its animosity or to its affection, either of which is sufficient to lead it astray from its duty and its interest. Antipathy in one nation against another disposes each more readily to offer insult and injury, to lay hold of slight causes of umbrage, and to be haughty and intractable when accidental or trifling occasions of dispute occur,” he wrote.

The U.S., of course, did not heed his advice and has been involved in the affairs of other countries with nothing to do with its own national interests for decades.

Admonishing Washington’s warning of no foreign entanglements, in just recent years, the U.S. government has launched devastating, bloody wars against nations that posed no threat to the nation’s security: the deadly overthrow of the Iraqi and Libyan governments with military force; continuing illegal occupation and a military attack against the Syrian government; demonized Iran and imposed strict sanctions on them since they overthrew the Shah in 1979; accused of financing “color revolutions” in the former Soviet Union; Georgia ("Rose," 2003), Ukraine ("Orange," 2004), and Kyrgyzstan ("Tulip," 2005); a series of U.S. presidents unleashing orchestrated protests against the government of Venezuela, Bolivia and Ecuador; routine attacks with drones and missiles strikes; the Afghan War that George “Daddy’s Boy” Bush launched in 2001 that dragged on for 20 years.

Iran, Russia, and China are surrounded with U.S. military bases and now the current crisis is in Ukraine, where the U.S. is in the middle of a war with Russia after Moscow’s 24 February invasion.

Doug Bandow, a senior fellow at CATO, wrote, “Read George Washington and you would think he had gained a supernatural glimpse into today’s policy debates.”

Bandow wrote in 2020 that the U.S. could still be considered a republic, but its approach to foreign policy is imperial. He quoted John Quincy Adams who said the U.S. is no longer the “ruler of her own spirit.”

“Americans have learned at great cost that international affairs are too important to be left to the Blob and foreign policy professionals, handed off to international relations scholars, or, worst of all, subcontracted to other nations and their lobbyists. The American people should insist on their nation’s return to a true republican foreign policy,” he wrote.

TRENDPOST: Today, the White House has converged with the military-industrial complex to an extent and depth beyond what George Washington could have imagined. In policy, practice and operations, Washington is now run by military elites.

Indeed, the head of the Department of Defense, former Army General Lloyd Austin, sat on the Board of Directors of Raytheon, the second largest Defense contractor of the United States, before Joe Biden gave him the job.

Unlike the U.S. generals today—arrogant “commanders” who have not won a war and brag of their successes—Five Star General Dwight D. Eisenhower, Supreme Commander of the allied forces during WWII and two-term President, warned the American people in his 17 January 1961 farewell address that "In the councils of government, we must guard against the acquisition of unwarranted influence, whether sought or unsought, by the military-industrial complex. The potential for the disastrous rise of misplaced power exists, and will persist."

And here we are today, the U.S. citizens are servants of the military industrial complex. And absent in the mainstream narrative is “Peace on Earth, good will to men.”

Peace is prohibited and talk of it is blackballed. Indeed, we sent out nearly 1,200 press releases announcing the Occupy Peace Rally in Kingston, NY on 23 July and not one mention of it by any of the national or local media.