FROM NEUTRAL TO NATO: FINLAND, SWEDEN WANT TO JOIN NATO; TURKEY STANDS IN THE WAY 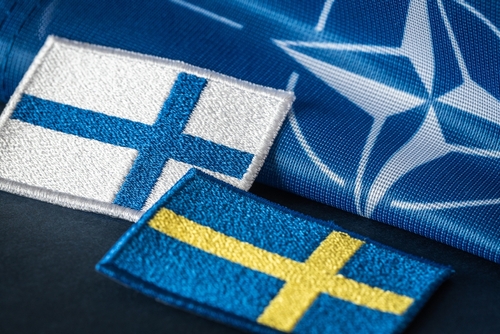 When Russian President Vladimir Putin launched the invasion into Ukraine on 24 February, he said that his country’s “special operation” was a preemptive move to terminate NATO’s “endless” expansion toward Russia.

Now that expansion has grown as Finland and Sweden announced that they will begin the process of seeking NATO membership due to Russia’s invasion of Ukraine and a palpable shift in public opinion in the two Nordic nations about joining the alliance.

Both countries have been neutral for decades and the announcement prompted the Kremlin to call the move a “grave mistake.”

“This will be another gross mistake with far-reaching consequences,” Sergey Ryabkov, the Kremlin’s deputy foreign minister, told reporters. “The fact that the security of Sweden, like that of Finland for that matter, will not be strengthened as a result of this decision is completely obvious to us.”

He continued, “It is a pity that common sense is being sacrificed to some phantom ideas about what should be done in the current situation,” and Moscow has issued a warning that it will take retaliatory steps of “military-technical and other characteristics.”

Finnish President Sauli Niinistö, announced Sunday that his country will apply for NATO membership and will end its historic position of military neutrality stating, “A protected Finland is being born as part of a stable, strong and responsible Nordic region.”

Finland has a formidable military although it only has a population of 5.5 million. The country has about the same number of reservists as Germany with a population of 83 million.

Finland shares an expansive, 830-mile border with Russia and was invaded by its neighbor during WWII, which resulted in a brutal confrontation that ultimately resulted in Helsinki and Moscow signing a peace treaty in 1948, which included Finland's assurances that it will not join NATO.

TRENDPOST: The Trends Journal has reported on Helsinki's push for NATO membership after a seismic shift in the country that showed the population wanted NATO protection due to Russia’s aggression in Ukraine. (See “FINLAND: NO NATO FOR NOW” and “RUSSIA WARNS FINLAND AND SWEDEN: DON’T JOIN NATO.”)

A poll taken weeks after the invasion showed that 62 percent of the country’s population supported NATO membership, which was up from 53 percent at the start of the war.

Following the announcement of Sweden’s intent to seek NATO membership, Swedish Prime Minister Magdalena Andersson declared that, “The best thing for the security of Sweden and the Swedish people is to join NATO. We believe Sweden needs the formal security guarantees that come with membership in NATO.”

Turkey, a member of NATO, came out strongly against membership for these countries, which could prevent membership since the alliance requires a unanimous vote.

Turkish President Tayyip Erdogan, who spoke out against membership, said Monday that Helsinki and Stockholm should not send envoys to discuss the matter because it would be a waste of time.

Erdogan has been critical of the two countries for their relationship with the Kurdistan Workers’ Party, the Syrian Kurdish People's Protection Units, and followers of Fethullah Gulen, the scholar who lives in the U.S. who Ankara accused of being behind a coup attempt in 2016.

"Neither of these countries have a clear, open attitude towards terrorist organization," Erdogan said, according to Reuters. "How can we trust them?"

He mentioned the delegation headed to Turkey and said, "They are coming to Turkey on Monday. Are they coming to convince us? Excuse me but they should not tire themselves.”

The comment comes days after Jens Stoltenberg, NATO’s secretary general, said he believes the process of giving Sweden and Finland membership will happen "quite quickly.” The Biden administration also said it would support such a move.

Turkey’s comment recalled a time in 2019 when President Emmanuel Macron of France called NATO "brain dead" after he cited the U.S.’s failure to consult NATO before pulling out of northern Syria.

As mentioned in many previous Trends Journal issues, we’ve pointed out the diplomatic failures of NATO, which remains a profitable business for weapons contractors.

Washington used NATO for the first time as an offensive weapon to break apart Yugoslavia during 1993-95. NATO air strikes and bombings frustrated the Yugoslavian government’s attempt to prevent the breakup of the country into its constituent parts.

In 1999 Washington again used NATO to strip from Serbia its historic homeland of Kosovo and deliver it into Muslim hands. In 2001 Washington pretended that the 9/11 attack was the work of Afghanistan and forced NATO to invoke Article 5.

This article says that an attack on one member is an attack on all, requiring every NATO country to come to Washington’s aid.  By forcing NATO to invoke Article 5, Washington provided cover for its war of aggression against Afghanistan that lasted 20 years and cost American taxpayers well over $2 trillion for a war that ended in a disastrous U.S. defeat.

Turkey, which joined the alliance 70 years ago, has been supportive of NATO's expansion, but its position on Finland and Sweden could prevent the two countries from membership because a unanimous vote is needed.

"We are following the developments regarding Sweden and Finland, but we don't hold positive views," Erdogan said, according to Reuters. He said it was a mistake for the alliance to accept Greece as a member in 1952.

“The previous administrations of NATO made a mistake regarding Greece, and you know the attitude that Greece has toward Turkey. We do not want to make a second mistake,” Erdogan said.

Tensions between Ankara and Athens have been higher than usual and Turkey is planning new drilling operations in the Eastern Mediterranean, according to reports.

TREND FORECAST: We pointed out in an earlier issue that there are concerns that Sweden and Finland could further provoke Russia into war.

Samuel Ramani, a professor of international relations at the University of Oxford, tweeted last month that Russian Senator Andrei Klimov called NATO a "suicide club" and warned that “Sweden and Finland could meet the fate of the Azovstal steel fighters in Mariupol if they join NATO.”

NATO officials have said they will speed up the process for Finland if it applies for membership, which is a stark reminder that Ukraine was denied full membership prior to the war against Russia.

Olga Stefanishyna, the Ukrainian deputy prime minister, told ABC News' "This Week" that NATO may have learned from how it handled Ukraine's 2008 membership application.

"NATO has learned from the mistakes" it made in 2008 with Ukraine's request to join "by making promises without delivering on decisions in terms of membership which has basically led to three wars, two of which are now happening on Ukrainian territory," she said.

Dmitry Polyansky, Russia's deputy UN representative, told Ria, the Russian news agency, that both countries would be possible targets for Russia if they join the alliance.  And last month, Dmitry Medvedev, the former Russian president and chairman of Russia’s Security Council, warned Finland and Sweden against joining NATO and said Moscow would have to beef up its military presence in the region if they joined the alliance.

“In this case, it will no longer be possible to talk about any non-nuclear status of the Baltic—the balance must be restored. Until now, Russia has not taken such measures and was not going to take them,” Medvedev said.