FROM DIRTY CASH TO DIGITAL TRASH 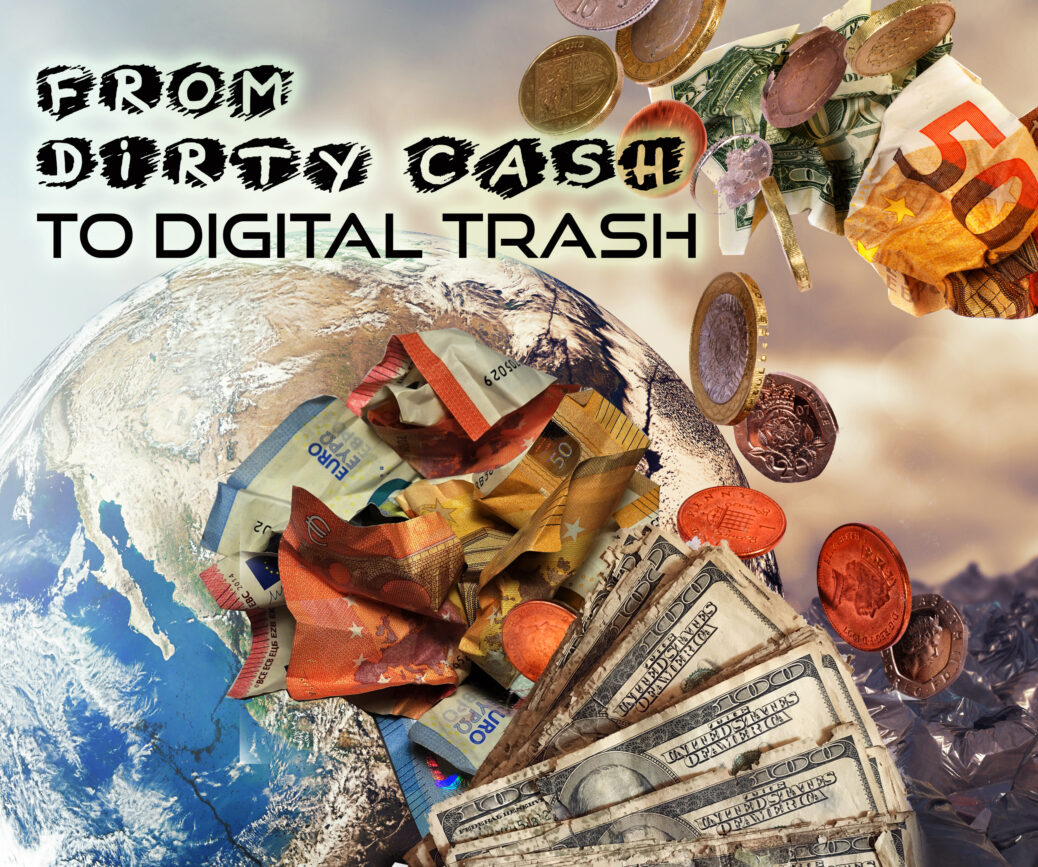 Before the coronaviruses’ germs on paper money scared our attention away from the worldwide demonstrations against economic inequality, the move to digital currencies was already in full stride.

With banks such as the Federal Reserve, the People’s Bank of China, and the Bank of Korea quarantining and sterilizing bank notes in order to “save lives,” at first glance it appears sensible, and even essential, to shift away from physical currencies.

On 3 March, when the World Health Organization (WHO) reportedly issued a warning that banknotes may be spreading the coronavirus, our digital fate was all but sealed.

This was, however, before WHO spokeswoman Fadela Chaib retracted the statement. Not surprisingly, the retraction occurred after the mainstream media picked up the story and circumvented the truth.

The truth is that throughout history, the world’s central bankers have used fear-based events, both natural and engineered, to further fleece their countrymen and women.

In the past couple of years, many major central banks have either launched, or are developing, a Central Bank Digital Currency (CBDC). Announced on 23 March, if passed, the House Democrats’ $2.5 trillion coronavirus stimulus bill will establish a digital dollar, which they define as “a balance expressed as a dollar value consisting of digital ledger entries that are recorded as liabilities… [stored in] a digital wallet or account, maintained by a Federal reserve bank.”

Central bankers might say the reason they want digital currencies is to provide faster, safer, and more convenient capital movement – which they can do. But, the actual reason is they have abused the world’s monetized debt-based monetary systems to the point of no return.

The problem inherent in the monetized debt system is that if the debt is paid off, there will be no circulating medium… which is a debt trap. Long understood by the “high priests of monetary science,” the way to deal with insurmountable quantities of debt is to reduce its value by creating more debt. And, when the inflation becomes unruly, the bankers simply devalue or revalue the currency, depending on their objectives.

History provides examples of this silent monetary warfare on the unknowing savers and laborers. In 1948, the Deutch Mark wiped out much of Germany’s accrued debt, along with its people’s savings. In 1960, it was the French Franc, followed by Brazil’s Cruzeiros in 1967… also robbing their citizens. The Mark and Franc were replaced by the Euro and through the years the Cruzeiros suffered further devaluation, along with a few name changes. The dollar, and American workers/savers, are now on the same path.

Over the past three weeks, the Federal Reserve has pumped over $2 trillion into the system, lowered the interest rate to near zero, and, on 20 March, announced it would be offering $1 trillion per day for loans in the repo market.

On Monday, the Federal Open Market Committee, the “monetary policymaking body” within the Federal Reserve System, opened the floodgates like never before by declaring they would:

Starting Thursday, 26 March, the Fed will even reduce the reserve requirement of commercial banks to zero. And, not to be left out, the Department of the Treasury will be “using the Exchange Stabilization Fund (ESF), [which] will provide $30 billion in equity for ‘U.S. dollars, foreign currencies, and Special Drawing Rights (SDRs)’.”

The IMF, with their “world currency” SDRs, has 189 member countries and certainly is able to be the world’s digital “lender of last resort.” The SDR was conveniently created just before President Nixon unpegged the dollar from gold in 1971. The apparent reason was to backstop the banks if the economies reacted too violently to the shift from gold to monetized debt. Now comes the move to digital currency.

Anyone doubting the looming monetary regime change should note the IMF’s $1 trillion “bazooka” announced on 16 March, ostensibly to help nations afflicted with the coronavirus… along with the above mentioned SDR ESF “foot in the door.”

If the central bankers install an entirely new paradigm, one that uses SDR-backed CBDCs to fully track earnings, savings, and spending, it will be a banker’s dream… and not just for central bankers. Even commercial banks such as JPMorgan, with their “JPM Coin,” are joining in the fun. What’s more, it will signal the end of the sovereignty of the U.S. dollar and America itself.

In an interview with the Financial Times published 30 June 2019 (five months before the coronavirus first appeared in China), Agustín Carstens, the general manager of the Bank for International Settlements, said, “Global central banks may have to issue their own digital currencies sooner than expected… many central banks are working on it; we are working on it, supporting them… and it might be that it is sooner than we think that there is a market and we need to be able to provide central bank digital currencies.”

According to European Central Bank president Christine Lagarde, digital currencies will have “anti-money laundering and terrorist financing controls [that] would nevertheless run in the background. If a suspicion arose it would be possible to lift the veil of anonymity and investigate.”

So, aside from more power to the powerful, the cash that would have been hidden under a mattress or buried in a backyard instead will be in an e-wallet, and “under the table” will be over, forever. And probably sooner than you think.