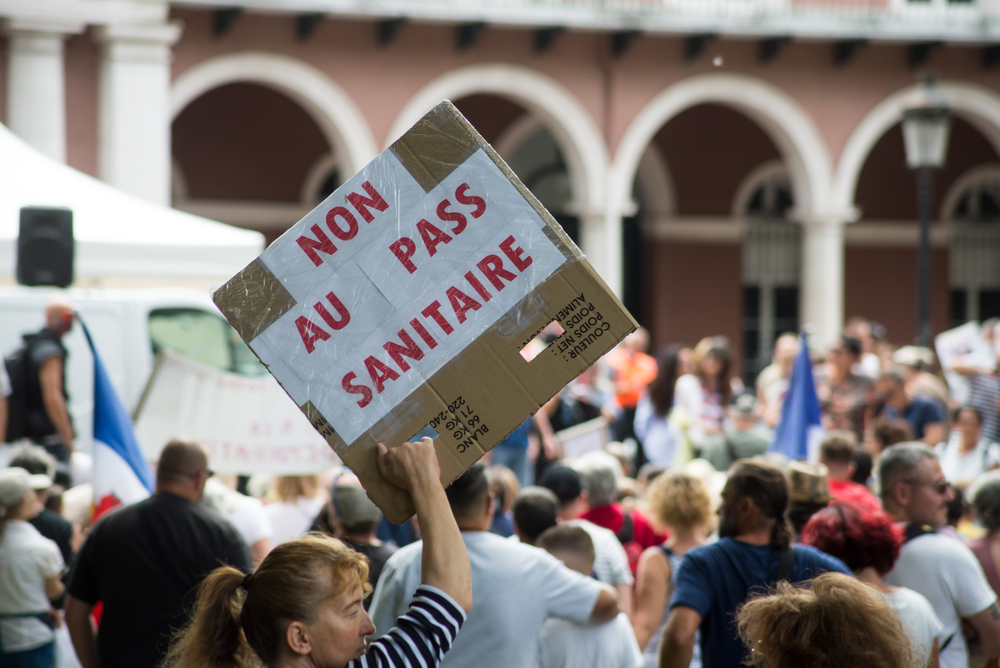 Barely reported, it did not make the headline news in America. For the sixth weekend in a row, hundreds of thousands took to the streets in France to protest the Orwellian labeled "health pass."

And despite “unofficial” accounts of up to some three hundred thousand protesting across the nation, when reported by France 24, they downplayed the turnout with their lead sentence that read: “Thousands of people demonstrated in the streets of France again on Saturday against the government's Covid-19 vaccination policies... .”

Indeed, to diminish the significance of the push back against government orders, France 24 lied outright. No, not “thousands”, “Hundreds of thousands” took to the streets. Yet, with the Presstitutes being paid to put out what their government whoremasters and corporate pimps tell them to... they “officially” lie.

French interior ministry figures put attendance at prior events at some 200,000 persons, although organizers claim that the numbers are being underreported; the discrepancy in numbers was addressed in last week's Trends Journal in "FRENCH VAX PASS PROTESTS ESCALATE. MOST MEDIA IGNORES THEM, LIES ABOUT SIZE" (17 August).

By Order of the King

Ordered by the King of France, i.e., President Emmanuel Macron, the plantation workers of Slavelandia are required to show proof of vaccination or a negative COVID test for admittance to restaurants, theaters, large shopping centers and long-distance trains.

The protestors see the health pass requirement as an affront to the freedom and rights of the non-vaccinated. The demonstrations have brought out former members of the "Yellow Vest" movement, which staged strikes across the country (See 3 December 2019's "FRANCE: NATIONAL STRIKE IS BREWING"), as well as anti-vaxxers and those who see the health pass as a form of apartheid.

And to discredit the movement they wrote that there is “ concern from rights groups about anti-Semitic sentiment in the protest movement.”

What makes the marchers anti-Semites? “Some protesters have worn yellow stars similar to the ones that the Nazi regime forced Jews to display during World War II, leading to condemnation from Holocaust survivors for the offensive comparison.”

How dare they use a symbol of authoritarianism that for those who want freedom, and wave flags and banners with the word "Liberty" on them while shouting "Macron! We don't want your pass!”... are fighting for.

Meanwhile, in the U.S., there appears to be nothing newsworthy going on in terms of any organized resistance to the various "health pass"-type programs being employed, such as the "Key to NYC Pass" now required by Mayor Bill de Blasio (see 10 August's "WARREN WILHELM: ACHTUNG: 'IT’S TIME TO FORCE VAX COMPLIANCE'”).

TREND FORECAST: In fact, this COVID War passport system is being instituted around the world and across America... whether mandated by dictatorial governments or being imposed by businesses large and small.

And now that the U.S. Food and Drug Administration having “officially” approved the Operation Warp Speed shot, more mandates will be coming to a country, city and state near you. In fact, yesterday, U.S. President Joe Biden declared, “As I mentioned before, I’ve imposed vaccination requirements that will reach millions of Americans,” Biden said Monday.