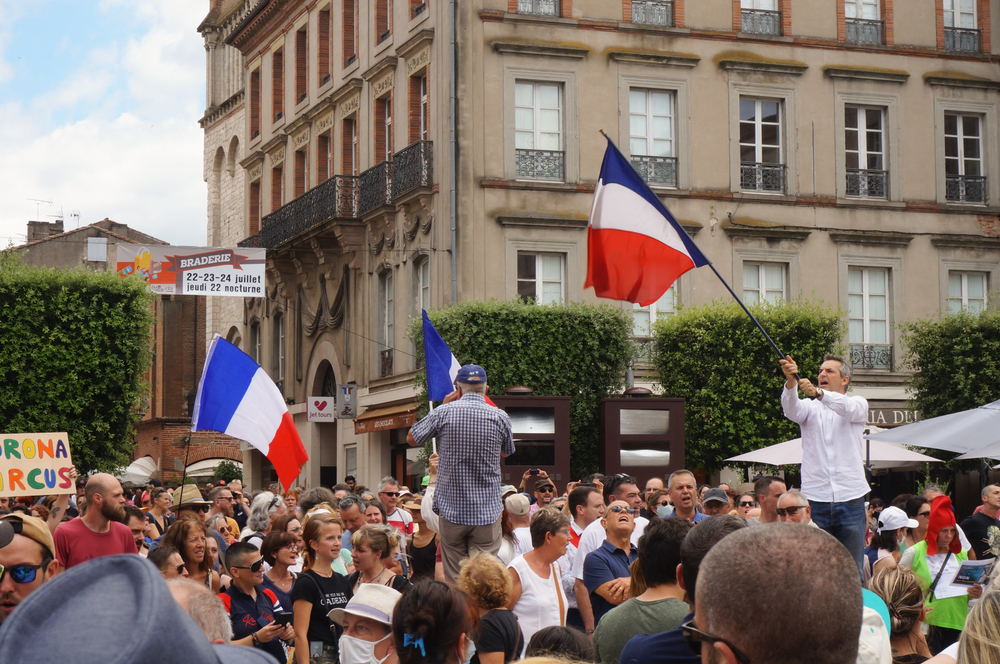 In mid-July, French President Emmanuel Macron mandated COVID-19 vaccinations for all health workers. Macron also announced that, starting 1 August, adults must have a "health pass" in order to access restaurants, cafes and shops as well as trains, planes and other public venues. Starting 30 September, the same pass will be required of anyone over 12.

Furthermore, on 26 July France's parliament approved a law requiring all health professionals in contact with COVID-vulnerable persons to be vaccinated by 15 September, upon pain of lost salaries or even jobs should they fail to comply.

Protests have been widespread across the country, even before such laws were approved. On 23 July RT.com reported that the staff of the hospital in Montelimar, in the department of Drone in the southeast of France, have gone on an indefinite strike to register their displeasure with the new rules, "forced vaccination" and lockdowns.

Hundreds assembled outside the hospital, chanting "Liberté!" The strike was announced by the CGT-GHPP trade union, and affects about 200 doctors and some 1500 nurses in that city.

A union representative spoke against vaccine mandates and "vaccine coercion," claiming that the workers were not given the choice between testing and vaccination, and that while they do not oppose vaccination on principle, they are against it being compulsory and favor "free and informed consent." She also pointed out that, although positive tests for the Delta variant are rising, there is no corresponding rise in hospitalizations and there are fewer people in intensive care.

The striking workers also lament the lack of public debate on the matter, noting that the National Assembly appears to have accepted the High Health Authority's advice that the vaccination mandate was "justified."

It's not just health workers who have taken to the streets to protest various anti-COVID measures. On 24 July there was a heavy police presence on the streets of Paris, and traffic was stopped and teargas deployed against demonstrators who scuffled with police on the Champs-Elysees. Protestors carried banners reading "Stop the Dictatorship." Officials said that 161,000 people had turned out to protest, up from 114,000 the previous week.

Macron, whose future is uncertain after his LREM party didn't gain a single seat in the regional elections last month (which were marked by low turnout, only 35 percent of the people voted), spoke of the demonstrations' organizers as "people who are in the business of irrational, sometimes cynical, manipulative mobilization."

TREND FORECAST: It should be noted there were intense, ongoing protests in France in 2018 and 2019 that were locked down when the French government launched their version of the COVID War in the winter of 2020.

It began with the Yellow Vest movement in the fall of 2018 that brought people to the streets in protest of rising petrol taxes.

In 2019 major unions, who led a national strike, had previously not been supportive of the Yellow Vest movement. Among the large unions behind the demonstrations were transport workers, air traffic controllers, teachers, hospital workers, fire fighters, and lawyers. In that December 2019 protest, nearly a million French citizens took to the Street.

Thus, we forecast that there will be intense and ongoing protests since not only will there be an anti-vax movement, with new COVID rules now in place, France’s economy will not rebound as anticipated ... and when people lose everything and have nothing left to lose, they lose it. And lose it they will.