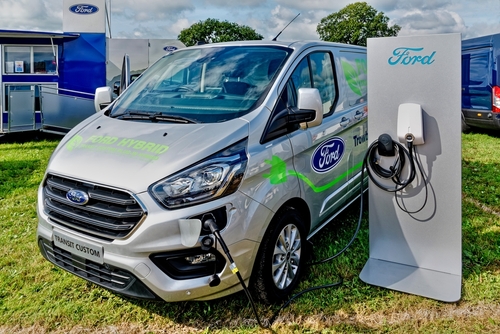 Ford Motor Co. has split itself into two divisions.

“Ford Blue” will make petroleum-powered cars and trucks and try to grow its share of that market, while “Ford Model-e” will make electric vehicles (EVs).

Ford made the split because public acceptance of its EVs “has been so far beyond our expectations,” James Farley, the company’s chairman, said in a statement quoted by the Financial Times.

“You cannot ask the same people to build a [gas-powered] Superduty [pickup truck] and beat” Tesla’s electric Cybertruck, he added.

The two divisions will have separate leadership but will share technology development and will not become separate entities with separate stock market listings, Farley said.

Fairly will helm the Model-e operation and remain as chair of the overall corporation; the petroleum-engine division will be led by Kumar Galhotra, who now heads Ford’s Americas segment.

Ford plans a third of its total sales to be EVs by 2026 and half by 2030. It already has committed to making EVs half of its European sales by the end of this decade and building only EVs by 2040.

TRENDPOST: Separating the two units is a clear statement that Ford is staking its future on EVs, a decision underscored by the corporation’s board chair taking charge of the new division.

Ford is late in making that statement. Fiat, General Motors, Volkswagen, and Volvo are among automakers that already have set a date certain by which they will stop making petroleum-powered cars and trucks.

Creating a distinct EV division with a separate leadership and engineering staff also will enable Ford to make faster progress in the race to capture EV market share. Its key competitor is not General Motors but China, which already has produced more than 300 EV models and is bent on a global conquest of the EV market.