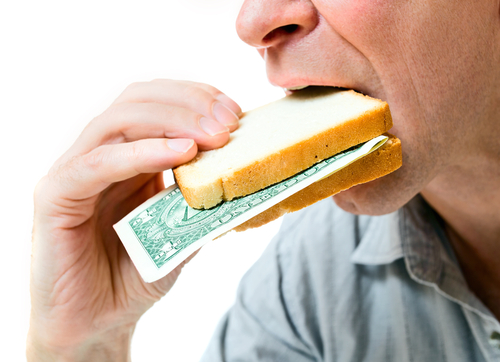 Droughts in the U.S. and South America have ruined coffee, corn, sugar, wheat, and other crops.

China’s record purchases of grains have tightened global supplies and pushed up prices for livestock farmers and food processors.

The cost of cooking oils has surged as the biofuel industry has claimed a larger share of world production.

Globally, food prices have increased for 12 consecutive months, a streak not seen in a decade, according to the UN’s Food and Agriculture Organization (UNFAO).

UNFAO’s food price index is at its highest since September 2011 and added almost 5 percent in October alone, led by price spikes in grains, sugar, and vegetable oils.

Bloomberg’s Agriculture Spot Index, tracking prices across a range of food categories, has gained 70 percent in the last 12 months.

Europe’s price of natural gas has soared in recent months, causing fertilizer producers to cut output or even shut down plants and prices to triple since spring, pushing fertilizer beyond the reach of many small farmers.

Manufacturers extract ammonia and other fertilizer ingredients from natural gas.

"We risk a very low crop in the next harvest," he warned. “We're going to have a food crisis."

“Any of those things could push prices up further than they are now,” he warned.

“We are at sort of a borderline,” he added.

“Over the next few weeks…weather is either going to really make it or create really big problems.”

As we have forecast, considering their economies were going down before the COVID War began some two years ago, the current food crisis will hit developing nations hardest.

First, households in poor countries tend to spend a larger portion of their incomes on food staples. And now, with people earning less and paying more, bad times will turn horrible.

Second, staples generally make up a larger portion of low-income nations’ food imports, while developed nations tend to import non-staples such as wines or specialty fish.

Many regions of the globe already face food shortages.

Madagascar’s harvest this year is one-third the average of the past five years’, Frédérica Andriamanantena, the World Food Program's Madagascar program manager, told the COP26 climate conference on 10 November.

Children in her country are foraging for plants and eating cactus leaves, she said. “That is where the situation is now.”

TREND FORECAST: Food processors are now routinely passing higher input costs to consumers, a shift we have documented in “Inflation Ripples Through U.S. Economy” and “Crop Prices Highest in Eight Years” (both 11 May 2021).

Now that extreme weather events have become the New ABnormal, food prices will remain even more volatile than usual. The unanswered question is how much more expensive they will be.

In the developing world, shortages and rising costs will ignite more public protests, leading to political instability, social turmoil... and accelerate the refugee crisis especially in South America and Africa.

TREND FORECAST: In the U.S., and developed nations, higher prices for factory food and produce from industrial farms, as well as scarcities imposed by droughts and storms, will extend two trends.