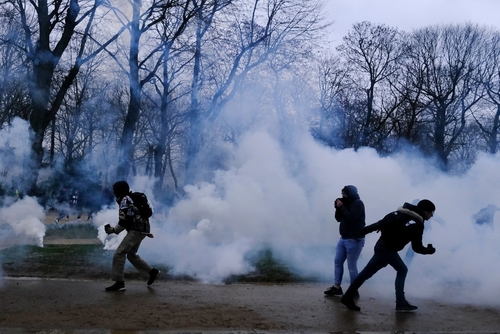 A massive protest occurred Saturday in Brussels over the government’s vaccination campaign and COVID-19 restrictions that resulted in at least 70 arrests after violent clashes with police.

The Associated Press reported that police in white helmets used water cannons to disperse the crowd. Many were defiant. A person on a loudspeaker told the crowd, “Come on people! Don’t let them take away your rights.”

Videos that emerged on social media showed protesters attempting to break windows and chase police officers into a subway station. Protesters lashed out at Prime Minister Alexander De Croo’s decision to require a so-called Safe Pass for entry at indoor venues in the country.

“What has been happening since 2020 has allowed people to wake up to corruption.” Francesca Fanara, who traveled from northern France, told the outlet. Another protester said, “It warms the heart to see these people here.”

And, we maintain our trend forecast that there will be a continuing winding down of the COVID-War by late March mid-April as politicians give in to business demands and civilian protests

TRENDPOST: While the media keeps selling cases, Belgium, as with the rest of the world, has seen record numbers of COVID-19 infections but hospitalizations are far from the height of the outbreak.

Some 77 percent of the country’s population has been fully vaccinated, and 53 percent took a booster jab. Thus, considering the intensity of the protests we do not anticipate a much higher vax rate in Belgium.