FAUCI: FACTS DON’T COUNT, AUTHORITIES DO AND WE’LL TELL YOU WHAT TO DO 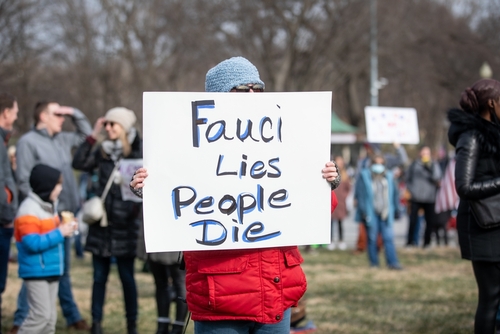 Dr. Anthony Fauci said in an interview last week that the Justice Department’s effort to reinstate the COVID-19 mask mandate on planes is about control and not about the need of the mandate itself.

The DOJ On Tuesday called on a federal appeals court to overturn U.S. District Judge Kathryn Kimball Mizelle’s decision to strike down the mandate in April. Mizelle, who was appointed by former President Trump, said in her ruling that the Centers for Disease Control and Prevention acted inappropriately when it invoked the so-called “good cause exception.”

“Because our system does not permit agencies to act unlawfully even in pursuit of desirable ends, the Court declares unlawful and vacates the Mask Mandate,” she wrote.

“One of the issues, Neil, that I have articulated in the past and I will in the future—it is less about mandates on the plane that it is about who has the right and the authority and the capability of making public health decisions,” Fauci said.

“So it's more of a matter of principle of where the authority lies then it is about whether or not there's going to be a mandate on a plane or not,” he said.

The U.S. has seen an increase in COVID-19 cases, which health officials say could actually be about 30 times higher than reported. But airlines in the U.S. have urged the administration to end pre-departure testing requirements for international flights.

Robert Isom, the CEO of American Airlines, told a conference on Friday that the requirement is "nonsensical" and "depressing" leisure and business travel, according to Reuters. The report pointed out that international air travel is down by about 14 percent. Airline executives say Americans are concerned about testing positive overseas and being stranded.

"We're really frustrated and this is something that is damaging not only U.S. travel but it just doesn't make sense," Isom said.

TRENDPOST: Fauci’s comments on face masks is further evidence that these mandates were never based on science, but only on the politics of  how to control the public.

The Trends Journal has reported extensively on masks and how they give wearers a false sense of security. (See “MASK MADNESS: PART 2,” “NEW CDC CLAIM: ‘TWO MASKS BETTER THAN ONE,” and “STUDY: MASKS HARMING CHILDREN.”)

Ambarish Chandra from the University of Toronto and Tracy Beth Høeg from University of California, Davis published research in Lancet last week that pointed to multiple observational studies by the CDC that claimed school mandates were effective in stopping the spread. They replicated the study and the CDC's findings were accurate.

But they said when they extended the study using a larger sample of districts and a longer time interval, employing almost six times as much data as the original study, they found “no significant relationship between mask mandates and case rates.”