“FART OF OLD” NEIL YOUNG SUCCEEDS IN GETTING ROGAN CENSORED 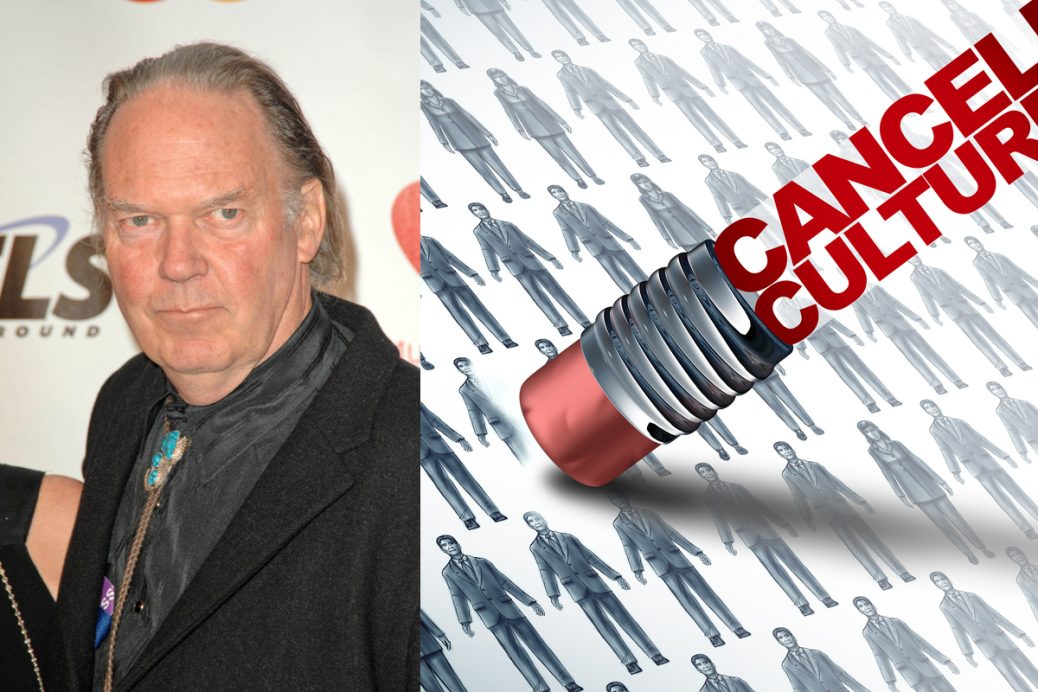 It didn’t take long for the Empire to strike back.

Spotify, a leading music and podcast streaming service often used on cellphones and other devices, has removed over one hundred episodes of “The Joe Rogan Experience” podcast.

The immediate impetus for the removal was an exodus of Spotify by a handful of music artists, spurred by Neil Young.

Young, known for rock classics like “Heart Of Gold,” is evidently in mortal fear of catching the virus and dying before he gets even older (he’s 76, closing in on the average age of death for U.S. men).

Spotify’s action is a decided step in that direction.

Rogan Another Thorn In The Side Of Elites

“The Joe Rogan Experience” is the number one listened-to podcast in the world.

Rogan exercises influence on a par with Tucker Carlson, which is saying something.

As Rogan has interviewed and entertained more points of view and evidence from different guests concerning the agendas and actual misinformation surrounding everything from COVID therapies to the JFK assassination, the political establishment and MSM media have clearly been growing uncomfortable.

The shipped up controversy extracted an apology from Rogan, who promised more balance on his podcast.

In other words, Rogan, who helped represent true balance by voicing alternatives to the goose-step propaganda of most media concerning corporate-government narratives, pledged to get in line.

It probably won’t help his cause.

Spotify has so far removed 113 episodes of "The Joe Rogan Experience," many of them older and taped before his current COVID-19 issue, according to JREMissing, a website that tracks the podcast.

Among the missing episodes are ones featuring well-known conservatives, and ones authorities like to smear and label as “far-right” and “conspiracy theorists,” such as Proud Boys founder Gavin McInnes, Michael Malice, Alex Jones, and Milo Yiannopoulos.

Even episodes with outspoken comedians like Rich Vos and Little Esther have disappeared down the memory hole.

Rolling Stone put out a story about Young spearheading the cancel Rogan effort, with the title “Neil Young Took a Principled Stand. Some Right-Wingers Had Never Seen One Before.”

But the decidedly un-edgy hagiography failed to delve into corporate connections of Young that smell to high heaven.

It was left to Twitter and some 4chan users to expose the dubious links.

for every elaborate wall of text work the MSM puts out, one anon from a chan / BBS can destroy it all in single day. 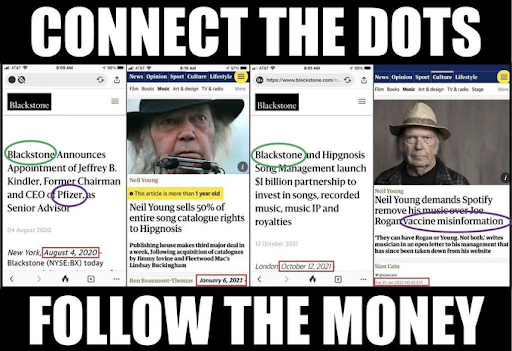 3) Consequences as dates roll forward for both actors.

4) Top and Bottom Bold Capitalized text surround events with a simple axiom to sum it up.”

But the effort against Rogan likely goes deeper, and may be even more coordinated.

It’s becoming obvious as old footage of Rogan (a comedian active in the 1990’s) making crude racial jokes and using the N-word, is suddenly surfacing, that a cancel campaign is being waged in waves.

For more on the intrigue and players, check out the interesting info at The Free Press Report on substack.

On Monday, the Joe Rogan Spotify saga took another turn when Rumble, the uptrending video streaming service, offered Rogan 100 million dollars over four years to bring all his former podcasts and new shows to Rumble.

A post from Rumble signed by CEO Chris Pavlovski made the proposal to Rogan: 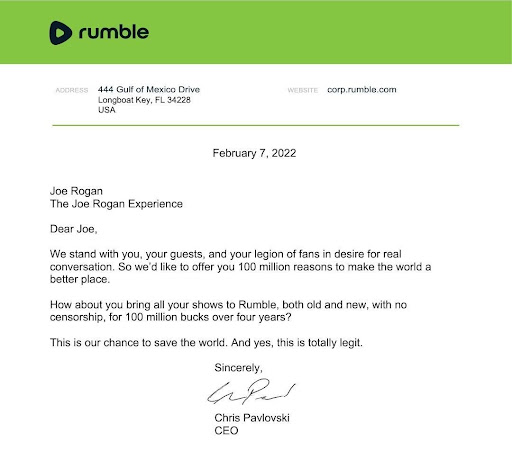 Joe Rogan is the latest frog being brought to a boil by elitist powers, and his promises to quiet his voice and even act as a platform for approved narratives may only save him on Spotify if he becomes a complete toady of the corporate state.

Other platforms making offers to Rogan is encouraging, and shows what Trends Journal identified as a growing trend of an alternative politically necessitated economy. See “ARE AMERICANS HEADING TOWARD A SILENT SECESSION?” (4 May 2021) “GAINING FREEDOM FROM THE TECHNOCRACY” (20 Jul 2021) and “GAB ADS WILL OFFER ALTERNATIVE TO GOOGLE ADSENSE” (10 Aug 2021).

But if Rogan really wanted to explode the heads of his enemies, he could respond to the attempt to “Alex Jones” by joining Alex Jones's InfoWARS network.

That would be something. It might even result in a COVID vaccine-like case of myocarditis for a certain “Heart Of Gold” singer.