FACEBOOK: CALLS FOR PEACE AND TO STOP ARMING UKRAINE FORBIDDEN 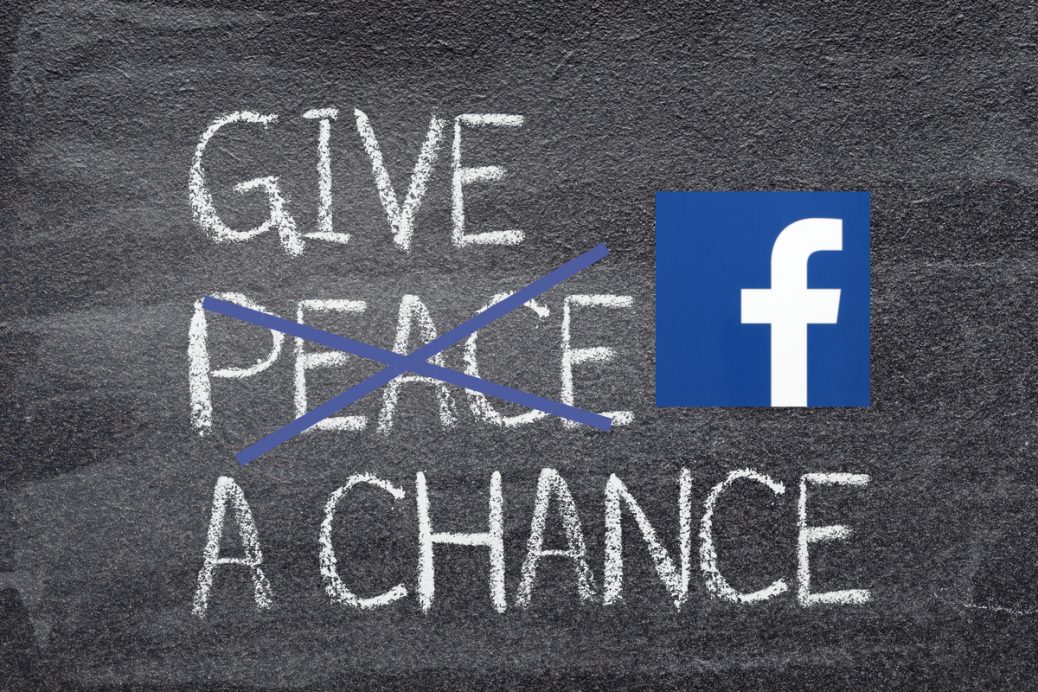 Corporate media produces the propaganda and Big Tech muzzles "the other side." This time it is Facebook, the social media giant, that has been accused of pulling a video off its platform that called on Germany to end its involvement in the NATO-led “proxy war” unfolding between the West and Russia in Ukraine.

WSWS.org reported that Facebook removed a video called, “No Third War! Against the War in Ukraine, NATO Aggression and German Rearmament!”

“Facebook’s actions expose the official narrative that the Ukraine war is about defending “Western democracy” against “Russian authoritarianism” as a propaganda lie,” WSWS.org wrote in an editorial. “Indeed, the ruling class in the imperialist countries is increasingly resorting to repressive measures because it fears the growth of opposition in the working class to its murderous policy in the interests of the rich.”

Germany is set to send Ukraine about €300 million worth of weapons in order to continue the fight against the Russia invaders Euractiv.com reported, citing a leaked document obtained by die Welt.

Rheinmetall, Germany’s biggest weapons producer, already offered Berlin about €510 million worth of armaments that are ready to be shipped to Kyiv. (See “WARMONGERS ON PARADE: WEST SENDS MORE WEAPONS TO UKRAINE TO KEEP THE KILLINGS GOING.”)

We pointed out that Russia is often mocked by the West for its propaganda arm in state media, but the Ukraine War has shown the U.S. media also has the ability to walk in lockstep with the government during conflicts.

In the buildup to the Russian invasion, which we are totally opposed to, Zelensky had the opportunity to avoid war, but brushed off any agreement while the United States helped ramp up the tensions. (See “WASHINGTON GIVES COLD SHOULDER TO RUSSIA’S SECURITY CONCERNS,” “BIDEN HITS RUSSIA WITH SANCTIONS,” “NATO: WE ARE THE WORLD” and “KREMLIN BLAMES UKRAINE FOR STOKING TENSIONS AT BORDER.”)

TREND FORECAST: Gerald Celente, who is opposed to Russia’s invasion of Ukraine and is founder of OccupyPeace.com, has accused the United States and NATO of prolonging the war by sending more armaments to Ukraine that will prolong the war, lead to more deaths and destruction of the nation rather than taking ceasefire measures to negotiate for peace.

Celente has pointed out that Napoleon sent 420,000 brave young men to defeat Russia and 410,000 were killed. He also pointed to Hitler’s Operation Barbarossa campaign that resulted in the deaths of 27 million Russians, who still ended up defeating Germany. Therefore, we maintain our forecast that Russia will not be defeated and their invasion objectives will be achieved.