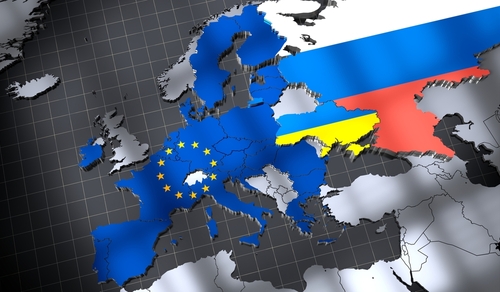 The European Commission said last week that it endorsed Ukraine's official candidacy to join the EU, but what that exactly means is unclear.

Ursula von der Leyen, the commission president, said Friday that Ukraine should be welcomed by European countries. The nod was largely embraced but the process could take decades.

French President Emmanuel Macron said “Ukraine normally should not be a candidate.”

“We're doing it because of the war and because we think it's good,” Macron said. “It's a sign of hope, it's a message for Ukraine to say that they are in the European family."

The EU is known for its close ties with NATO. The EU has 27 members and NATO has 30. A total of 21 countries are members of both groups. Last year, NATO leaders confirmed that the partnership with the EU “remains essential,” and said their “intention to continue to develop and deepen cooperation on current and evolving security challenges, such as strengthening resilience, maintaining our technological edge, and addressing the challenges to the rules based international order.”

The move could be seen as a first step toward NATO membership by Ukraine, which Russia said would be a red line. The Trends Journal has long reported that former Ukrainian president Viktor Yanukovych’s decision not to sign an agreement with the EU led to protests and the U.S.-backed overthrow of his administration for leaning toward Russia.

TRENDPOST: A report from 2014 in the Trends Journal laid out the political maneuvers at the time in Ukraine: “Washington’s coup in Ukraine brought not only a threat to the Russian population in Ukraine but also a direct strategic threat to Russia itself.”

Allegedly, the purpose of NGOs is to “teach democracy.” Ukraine, however, already had a democracy. In reality, the NGO organizations are U.S. fifth columns that can be used to organize protests and to provide support for Washington’s candidates for the Ukraine government.

Dmitry Medvedev, the deputy chair of the Security Council of the Russian Federation, said the invite means Ukraine could join sometime in the 2050s and the EU may not even exist by then.

He continued, "Perhaps (knock on wood) the EU disappears by this time? It's frightening to think what a scandal this would be, given the sacrifices that have been made on the altar of joining the EU, and what a deception it would be of the expectations of the unfortunate Ukrainians."

Russian President Vladimir Putin seemed to be unfazed at the possibility of Ukraine joining the EU.

"We have nothing against it," he said, according to Reuters. "It is not a military bloc. It's the right of any country to join economic union."

The European Commission also recommended that Moldova is also named a "candidate" for joining the EU.

Ukrainian President Volodymyr Zelensky praised von der Leyen's endorsement and posted on Twitter that it is the first "step on the EU membership path that'll certainly bring our Victory closer."

“We are also in favour of Ukraine’s membership into the EU. Of course, Ukraine has all the attention and it is in the hearts of everybody who wants peace and democracy because there is a terrible war going on there, an unprovoked and unjustified war,” Kosovo Prime Minister Albin Kurti said during a meeting with Scholz. “But I believe there must be both [to join EU], Ukraine and Western Balkans.”

TRENDPOST: Ukraine, how low can you go? Totally unreported by the mainstream media is that Ukraine is one of the most corrupt countries on earth. Transparency International ranked Ukraine 123rd of the 180 countries it examined, which is slightly better than Russia, which came in at 139th. Ukraine scored 32 out of a 100-point scale and Russia scored 29.

Ted Galen Carpenter, a senior fellow at CATO Institute, wrote that Freedom House’s 2022 report listed Ukraine in the “partly free” category, with a score of 61 out of a possible 100. He wrote, "Hungary—which has been a target of vitriolic criticism among progressives in the West because of Prime Minister Viktor Orban’s conservative social policy—ranks eight points higher than Ukraine."

Reuters also pointed out that Transparency International, a watchdog, also called Ukraine one of the world's most corrupt countries, ranked 122 out of 180 states.