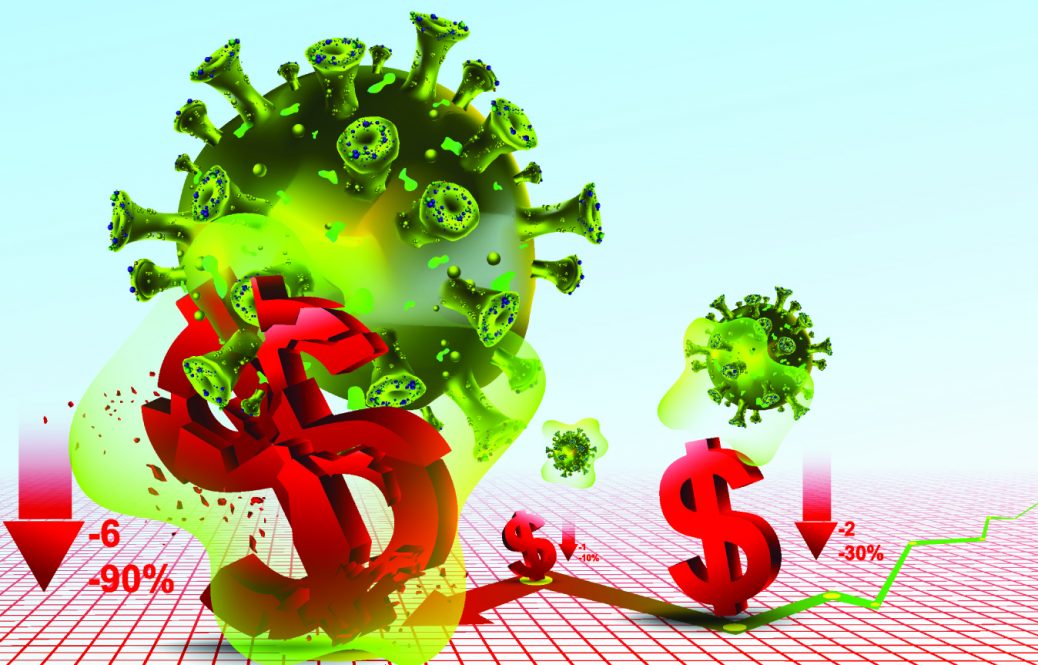 APRIL’S ECONOMY PAINTS GRIM PORTRAIT OF GLOBAL COLLAPSE. Great Britain’s economy was more than 25 percent smaller in May than it was in February.

The nation’s GPD contracted 5.8 percent in March and 20.4 percent in April, totaling a 26.2-percent shrinkage over two months of the shutdowns now easing there.

The U.K.’s Office for National Statistics estimated on Friday that the April shutdown cost the economy £30 billion (about $37.8 billion) and took output back to where it was in 2002.

“Eighteen years of growth was wiped out in a single month,” one observer said.

The shutdown closed hotels, restaurants, bars, and related services in March and April, causing that pocket of the economy to tailspin by 40.1 percent during the three months preceding May.

“April's fall in GDP is the biggest the U.K. has ever seen,” said Jonathan Athow, Deputy National Statistician at the Office of Economic Statistics, “and almost ten times larger than the steepest pre-COVID fall.”

Exports from Germany, Europe’s manufacturing center, were down a third from a year earlier. Bosnia and Croatia produced no steel and France, a center of fashion, saw clothing sales crater to 67.4 percent less year-on-year.

Uganda, which exported 500,000 tons of sugar in 2019, shipped none in April. South Africa’s volume of gold and platinum mined in April fell by half against the volumes a year earlier.

India registered no new car sales. IHS Markit’s Purchasing Managers Index for India’s service sector registered 5.4 in April, the lowest score ever recorded in any of its surveys.

A score below 50 on the 100-point scale indicates economic contraction.

“To see the numbers come down to single digits was inconceivable,” says IHS’s Chris Williamson, an economist who has helped compile the surveys for 25 years. “We never thought that could happen. You’re into totally uncharted territory.”

First, as lockdowns are lifted, there is likely to be a spurt of spending to relieve pent-up demand: children need shoes for school or church, broken appliances need to be replaced, people desperate for fun or personal indulgence will queue up at restaurants and whatever entertainment venues open.

Second, trillions of dollars in purchasing power has been wiped out of the world’s economy. Employment, spending, and capital investment react to each other and will need to collaborate to rebuild what has been lost.

And, as evidenced by the unparalleled list of redundant, costly, and contradictory made-up new rules and regulations imposed on businesses and citizens, April’s abysmal data is just the beginning of a road to economic decline that will be long and deep.

RETAIL GIANT INDITEX SHIFTS TO ONLINE. Inditex SA, the fast-fashion giant based in Spain that operates some 7,400 stores worldwide under the Zara, Uterque, Massimo Dutti, and other labels, will close about 1,200 outlets by 2022 and shift strongly toward online sales as it widows underperforming stores.

Asia and Europe will see most of the closures. The plan is expected to impact only about 100 stores in the Americas, which account for 5 to 6 percent of sales.

At the same time, Inditex will invest €1 billion to build its online presence, the company said.

First-quarter sales dropped 44 percent year-on-year and 51 percent in May, but were recovering in early June, when sales were off only 34 percent from a year previous.

The family-owned chain has weathered the global shutdown in better condition than many others, analysts say. The economic shutdown, however, has spurred the company to accelerate its transformation in a consumer economy that will be less well-heeled in the future and will not spend enough in many regions to support elaborate showrooms.

The company expects online sales to account for 25 percent of its revenue by 2025, compared to 14 percent in 2019.

TREND FORECAST: As we had forecast, the more businesses close shop, the lower rents will fall and the further the commercial real estate sector will decline.

JOB CUT BLUES. Centrica, owner of British Gas and other utilities and energy service companies, is set to fire another 5,000 workers as the economic shutdown compounds the company’s earlier woes, including 12,500 previous layoffs and shrinking profits.

Half the new job cuts will be among white-collar workers, the company said.

The additional cuts are part of the company’s plan to cut £2 billion in costs by 2022. The new round of terminations could help the company achieve that goal a year early, said Chris O’Shea, who became CEO in March.

Centrica’s revenue has been pinched by lower-cost competitors offering cheaper energy prices and services as well as commercial and industrial customers being shuttered by the lockdown.

Under O’Shea, the company will have fewer business units and fewer layers of management. O’Shea also has put special focus on the company’s 80 different labor contracts, after which one union leader vowed to “fight for every single job.”

Analysts are skeptical the company’s BBB credit rating will improve any time soon.

The new strategy does not “materially change the outlook for the company from a credit-rating or equity-holder perspective,” said Ahmed Farman, a Jeffries analyst who also expressed concern about the company’s “stretched balance sheet.”

FILTER MAKER MAKING LESS. Johnson-Matthey, the world’s largest supplier of catalytic converters for cars, is dispensing with 2,500 workers – about one-sixth of its labor force – as it tries to lop off $80 million in annual costs by March 2023.

It will “consolidate” its older plants in Europe, the British-based company said.

Auto sales are down by half so far this year in the U.K. and a third in the U.S. Global auto sales will drop 22 percent this year compared to 2019, according to research firm IHS Markit, drastically shrinking the company’s market over at least the next several months.

Also, prices for the precious and rare earth metals the company uses in its converters have climbed steadily in recent years, squeezing the company’s operating margins in a receding economy.

The company’s pre-tax profits declined 38 percent during this year’s first quarter and its share price has tumbled 30 percent so far in 2020. It reported a $60-million reduction in profits during the shutdown.

Auto sales are recovering in Europe, the U.S., and especially China, the company said. However, the weak economy “will adversely impact demand across a number of our businesses… for quite some time,” said CEO Robert McLeod.

The reduction in global car production will likely be “deeper and longer” than during the Great Recession, according to Adam Collins, an analyst at the Liberum investment bank.

HEATHROW LOSING AIR. London’s Heathrow Airport, Europe’s busiest terminal, has cut a third of its 1,500 management jobs and could lop a third of its 7,000 frontline workers.

May saw 97 percent fewer travelers pass through the airport than a year earlier, a record low number, and the U.K.’s government has mandated a 14-day quarantine for visitors arriving from most foreign countries, a move that has discouraged foreign travelers.

The airport cited both factors in explaining its layoffs.

British Airways, easyJet, and RyanAir are suing the government over the two-week isolation rule, calling it “unjustified,” “disproportionate,” and “ridiculous,” especially since the U.K.’s rate of COVID infection is higher than that in many of the countries from which visitors would be arriving.

Heathrow has asked the government to establish an “air bridge” program that would let travelers pass through the airport on their way to other stops in Europe without having to quarantine.

Greece, Portugal, Spain, and Turkey are among European countries establishing “air corridors” to allow travelers to move more freely across the continent and to help airlines and airports generate revenue.