EU TURNS TO ISRAEL FOR GAS AFTER ACCUSING RUSSIA OF ‘BLACKMAIL’ 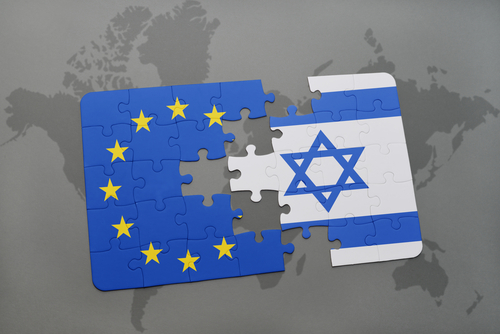 Since the beginning of the Ukraine invasion, European leaders have accused Russia of weaponizing their energy exports and last week announced two “major” energy infrastructure projects with Israel.

The projects will include a gas and hydrogen pipeline spanning the eastern Mediterranean and an “underwater power cable linking Israel to Cyprus and Greece,” the Financial Times reported.

Ursula von der Leyen, the president of the European Commission, visited southern Israel to make the announcement and blamed Russia for deliberately cutting “off its gas supplies to Poland, to Bulgaria, to Finland, to Dutch companies, to Danish companies, in retaliation for our support to Ukraine.”

TRENDPOST: Ms. von de Leyen failed to mention that Russia's decision was based on crippling sanctions imposed by the West and these countries’ unwillingness to pay for Russian gas in rubles. Without the resources to back up her words, she said the Kremlin’s attitude “only strengthened our resolve to break free of our dependency on Russian fossil fuels.”

“The idea was clear: crush the Russian economy violently,” Putin said during the annual St. Petersburg International Economic Forum, according to The Wall Street Journal. The paper said Russia looks at the forum as an answer to the World Economic Forum held in Davos.

“They did not succeed,” Putin said.

The paper said the Russian economy has been bolstered “by a windfall through the rising value of its energy exports, though poverty is spreading and inflation is eroding the spending power of ordinary Russians.”

Putin said the U.S. tries to present itself as God's messenger on earth, as though all of its foreign policies are divinely inspired.

“They do not seem to notice that new powerful centers have formed on the planet. We are talking about revolutionary changes in the entire system of international relations,” he said.

The FT pointed out that European countries have been looking for alternatives to Russian gas. The EU imported 155 bcm of gas from Russia last year, accounting for about 40 percent of the bloc's overall consumption.

Israel’s Energy Ministry said the gas will flow into Egypt’s LNG terminal through a pipeline under the Mediterranean Sea and will be transported by tanker to Europe, The Associated Press reported. The report said Egypt's natural gas facilities have been essentially collecting dust since the fall of Hosni Mubarak in 2011.

Simon Henderson, an energy policy fellow at the Washington Institute, told The Wall Street Journal that the agreement is a “positive step at a time of energy crisis,” but is not a panacea.

“My sense is we’re only talking about small amounts,” he told the paper. “This is going to happen slowly.”

The Jerusalem Post reported that some in Israel see the Russian invasion of Ukraine as an "historic" opportunity for Israel to step up its "energy game and, in return, increase its diplomatic value and standing in the Middle East and beyond."

Karin Elharrar, the Israeli energy minister, announced last month that Israel will offer licenses for new exploration of natural gas in Israeli waters, which the paper said was a "sharp turn" from what she said in December when Elharrar said Jerusalem will "focus on the future, on green energy, on energy optimization and on renewable energy, and while we do so we will put aside the development of natural gas, which, as is known, is [a] short-term solution.”

Late last month, she said, “The global energy crisis provides an opportunity for the State of Israel to export natural gas, along with the honest and real concern for what is going on in Europe.”

Von der Leyen said Russia’s “attempt to blackmail us through energy” forced the EU to turn to “trustworthy suppliers.”

“I am very grateful … that you are willing to increase the deliveries of gas to the European Union via Egypt,” she told Prime Minister Naftali Bennett.

Pascoe Sabido, researcher and campaigner at the Corporate Europe Observatory, told Al Jazeera that the EU is "shifting from one repressive regime to two more."

“It is putting the priority of getting gas over human rights,” he said.

He told the paper that gas exports will grant both governments greater political leverage and room for the “whitewashing of human rights abuses.”

TRENDPOST: As for “whitewashing of human rights abuses,” The Trends Journal has long reported on the human rights abuses that Israel has been accused of over its treatment of Palestinians. (See “APARTHEID STATE OF ISRAEL CLAMPING DOWN ON PALESTINIANS.”)

Sabido told Al Jazeera that the money Israel will receive from the EU will be "spent on increasing militarization, increasing settlements … Whilst the EU might be claiming to move away from Russia, it is doing so at the expense of Palestinians."