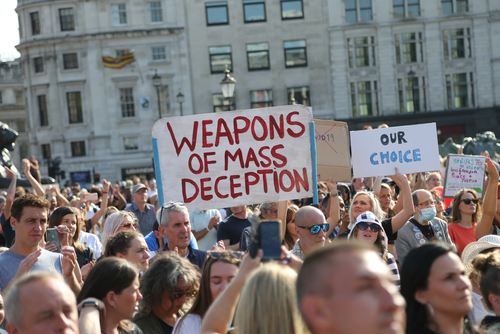 Somebody again has said what the Trends Journal has long been reporting (see links below). But, despite those efforts, it has been blacklisted by "mainstream," until this one article that made the “news” because it was reported by the establishment Presstitutes.

As reported on 2 January by The Guardian, a soon-to-be-released book—The Year the World Went Mad: A Scientific Memoir—by a leading epidemiologist, Edinburgh University's Professor Mark Woolhouse, posits that the U.K.'s reaction to COVID-19 was predicated on a patently flawed premise.

That premise, stated in a briefing at No. 10 Downing Street in March 2020 by cabinet minister Michael Gove, was that the COVID virus "did not discriminate," and that, therefore, "Everyone is at risk."

"I am afraid Gove's statement was simply not true," the professor says, adding that "In fact, this is a very discriminatory virus. Some people are much more at risk from it than others. People over 75 are an astonishing 10,000 times more at risk than those who are under 15."

That flawed premise is what led the U.K., and much of the world, to deal with COVID-19 by imposing draconian lockdowns and edicts on entire populations; policies that have already done, and will continue to beget, far reaching socio-economic and psychological harm.

Prof. Woolhouse echoes what has been said for some time by Trends Journal, by Ron Paul, and by The Great Barrington Declaration, among others; see, for example:

Woolhouse elaborates, describing his government's COVID strategy as "morally wrong," and adding, "It was a lazy solution to a novel coronavirus epidemic, as well as a hugely damaging one."

"We did serious harm to our children and young adults who were robbed of their education, jobs and normal existence, as well as suffering damage to their future prospects, while they were left to inherit a record-breaking mountain of public debt," he says, "All this to protect...from a disease that is a far, far greater threat to the elderly, frail and infirm than to the young and healthy."

Woolhouse takes his government to task for not doing more to protect the vulnerable; he points out that some 30,000 residents of Britain's "care homes" (largely the elderly and infirm, making them at the greatest risk) succumbed to the virus; much more could have been done, not only for them, but for their "shielders" (healthcare workers and informal caregivers), whom, he laments, received minimal recognition and no help.

TRENDPOST: In one area, Prof. Woolhouse differs from the policies advocated by The Great Barrington Declaration, in that he does not endorse letting the virus circulate freely until herd immunity is achieved. Rather, he advocates for the way Sweden handled the virus.

But, while Sweden concentrated on protecting the most vulnerable, the concept of herd immunity, along with strictly voluntary restrictions, was a factor in Sweden's approach; see "CORONAVIRUS: THE SWEDISH SUCCESS STORY CONTINUES" (5 May 2020).

Also not mentioned by any of the media, is what had reported back in 28 July 2020 when then Governor of New York Andrew Cuomo admitted that most of the people in the hospitals with COVID were locked down: