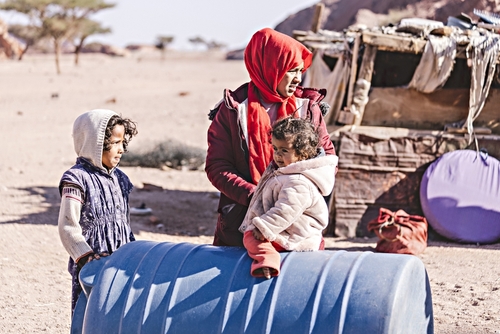 Egypt, the world’s biggest wheat importer, has asked the International Monetary Fund (IMF) for aid to stabilize its economy in the wake of rising prices for grain and oil, driven by crop shortages and higher prices made worse recently by Western sanctions on Russia.

Egypt’s government subsidizes bread purchases for 70 million of its people.

Also, the war between Russia and Ukraine has cut off the flow of tourists from those countries, a key source of revenue for Egypt’s travel economy.

“There were about $5 billion in net outflows in September through December and further outflows accompanied news of the Ukraine conflict,” Fitch Ratings wrote in an analysis last week.

On 21 March, Egypt devalued its currency as a prelude to requesting an IMF loan. The country also announced $7 billion tax cuts and added social spending.

“The rapidly changing global environment and spillovers related to the war in Ukraine are posing important challenges for countries around the world, including Egypt,” Celine Allard, the country’s IMF mission chief, said in a 23 March announcement.

The devaluation “smooths the path for an IMF program, which, we believe, will help anchor confidence in Egypt’s fiscal and reform trajectory,” Goldman Sachs analysts said in a note to clients.

“In that context, Egyptian authorities have requested the IMF’s support to implement their comprehensive economic program,” she added.

TREND FORECAST: As long ago as last spring, Egypt already was foreseeing food shortages and trying to lock down supplies, as we reported in “Crop Prices Highest in Eight Years” (11 May 2021).

The Ukraine war will prevent new wheat crops from being planted, harvested, processed, and shipped, worsening the food shortage in Egypt and dozens of other countries well into next year, and perhaps beyond.

Western sanctions add another barrier to food security for nations lacking a land border with Russia and will worsen the economic outlook for dozens of low-income countries that will have to pay sky-high prices to feed their people—if they can find the food in the first place.

As inflation rises, food shortages persist and economies decline, prepare for the New World Disorder as millions across the globe take to the streets in protest of economic hardship, poverty, crime, government corruption and violence.