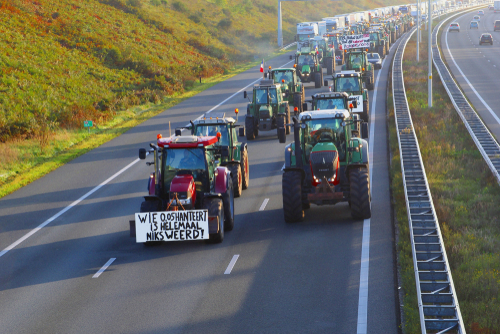 The internet blew up over the weekend with videos of farmer protests in the Netherlands.

There were columns of tractors and equipment filing down roads to government offices, literally flinging fertilizer to demonstrate resistance to measures which would likely end business for many of them.

At issue are the projected effects of climate legislation which by 2030 would force Dutch firms to cut national nitrogen emissions by 50% and by up to 95% in certain areas.

Cows and fertilizers have both been targeted as main sources of emissions being effectively outlawed.

Bloomberg reported that numerous farmers protested the idea by bringing their cows to parliament. Some threatened to slaughter cows on the spot.

Many have focused on the World Economic Forum (WEF) for its role in formulating and influencing governments to implement the climate related goals.

The Dutch government in a statement admitted that its new laws would result in farms being shut down: “The honest message … is that not all farmers can continue their business.”

If that weren’t enough, it’s also projected that the country’s airline industry would have to severely reduce flights starting in 2023, with an estimated 12 percent cut-back in fliers from 2019 numbers.

For more on technocratic designs related to the climate agenda, see: