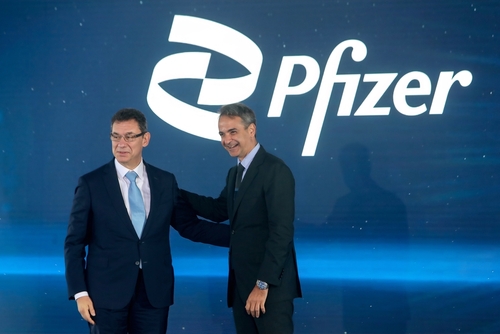 The drug lords who oversee top pharmaceutical companies like Moderna and Pfizer made enormous financial gains after the release of their COVID-19 vaccines and made a combined $100 million in salaries—despite politicians trying to sell the public the idea that the vaccines are free.

The Trends Journal has reported extensively on the windfall profits and the effort that these CEOs are making to continue pushing additional booster shots. (See “PFIZER DRUG LORD PUSHING YEARLY COVID JABS. CALLS THOSE WHO WON’T SWALLOW BULLSHIT, ‘CRIMINALS,” “PFIZER CEO SELLING ‘GET YOUR FOURTH SHOT” and “MODERNA EXPECTS TO REAP $18.4 BILLION FROM VACCINE SALES.”)

Pfizer was the first company to receive full approval from the U.S. Food and Drug Administration. CNBC reported that Pfizer’s Paxlovid is also expected to be a hit for the company, and is projecting about $22 billion in sales. Pfizer expects about $100 billion in revenues in 2022.

The Financial Times reported last week that Pfizer’s Albert Bourla, BioNTech’s Ugur Sahin, and Moderna’s Stéphane Bancel watched their income soar last year after governments forced citizens to take the jabs or be shunned from society and unable to make a living.

Bancel and Sahin became billionaires. Bancel’s shares in Moderna are worth about $5.4 billion and Sahin’s in BioNTech is worth about $7.8 billion.

The financial success that these companies have had have been a source of contention between them and activist groups who say they should share their intellectual property with poorer countries.

Steve Knievel, the access to medicines advocate at Public Citizen, a progressive think tank, told the paper, “Bancel, Bourla, and the other vaccine kings built a royal fortune predicated on a monopoly business model that has driven vaccine apartheid.”

TRENDPOST: The Food and Drug Administration last month approved a fourth booster shot for individuals over 50 or who have a compromised immune system, and there’s already talk about another booster just in time for Christmas bonuses.

These health agencies are no longer even thinking twice about approving another jab. The FDA and Centers for Disease Control and Prevention made the approval without even calling for a meeting of the vaccine advisory committees, which CNBC reported was a “rare move” for the agencies.

This is not the first time these advisory agencies were looked over. In September 2021, CDC head, Dr. Rochelle Walensky, also took a rare step and overruled agency advisers who did not recommend COVID-19 booster shots for younger, at-risk workers like teachers and nurses.

The Trends Journal has long reported that the more jabs Pfizer can get into your arms, the more money the company will make. And as we have noted, these COVID vaccines are set to become the most lucrative pharmaceutical product ever created. Why would these companies like Moderna—that never distributed a product before—want to stop?