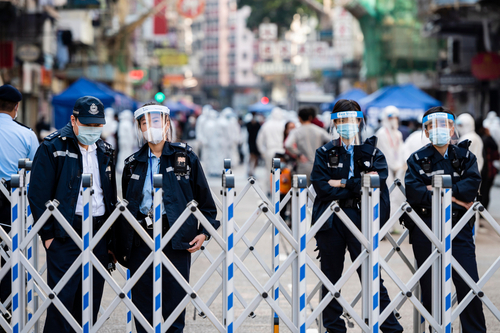 In April, China’s retail sales contracted 11.1 percent, year over year to their lowest pace since March 2020, and industrial output shrank by 2.9 percent, the worst month since early 2020, the National Bureau of Statistics reported, both figures disappointing expectations.

Economists polled by Reuters had predicted a 6.1-percent loss in retail trade but that industrial output would rise a modest 0.4 percent.

Factory output tumbled 4.6 percent, due largely to reductions in auto production and equipment manufacturing. The utilities sector rose in production.

In 2018, the vehicle industry employed a sixth of Chinese workers and made up 10 percent of retail sales, according to Ministry of Commerce data.

In late March, Beijing began imposing harsh lockdowns in populous areas in an attempt to control the COVID virus’s spread.

By late last month, more than 325 million people in as many as 46 metro areas were shut in at home or at their workplaces.

Largely as a result, the unemployment rate in China’s 31 largest cities reached 6.7 percent in April, CNBC reported. Among people ages 16 to 24, the jobless rate was 18.2 percent.

With a record number of school graduates entering the job market, China now has announced a program to help them find jobs.

The plan includes subsidies for firms upping the number of grads they hire and making a place for more new hires in state-controlled businesses.

The lockdowns “had a significantly larger-than-expected effect,” a bureau spokesman admitted, adding that the anti-COVID measures were not the only factor crimping industrial production, the bureau said. Weak demand and rising costs also played a part.

The “increasingly grim and complex international environment and greater shock of [the COVID virus’s reappearance] at home obviously exceeded expectation. New downward pressure on the economy continued to grow,” the statistics bureau noted in a statement.

“Although Covid case numbers have declined markedly from the peak in mid-April, the unwinding of lockdowns has been extremely slow, due partly to the caution among local government officials,” Ting Lu, Nomura’s chief China economist at Nomura, wrote in a research note.

“Therefore, we believe local lockdowns will still severely impact the production-end of the economy in May and view a quick turnaround as all but impossible,” he predicted.

Shanghai, China’s most populous city and home to the world’s largest shipping port, has said it will begin to allow restaurants to reopen “gradually” and has set mid-June as a target date for the lifting of all lockdown measures.

TREND FORECAST: We agree that a quick economic turnaround from China’s massive shutdown will be both difficult and risky. Difficult because the damage inflicted on the population has hit the people emotionally, spiritually and financially. And risky because last week the Chinese yuan continued its fall against the dollar with the offshore yuan at a September 2020 low of 6.8380.  Thus, the more money the government prints to boost the economy, the further the yuan will fall and the higher inflation will rise.

Through 2021, we saw how long it took for ports to work through backlogs of ships clustered outside of them. Factories will need to fill backorders; mines will need to resume deliveries of ores and minerals. Logistics chains need to catch up with a flood of calls for transport.

It will take months to bring those systems back to normal, with the interim fueling inflation and economic uncertainty.