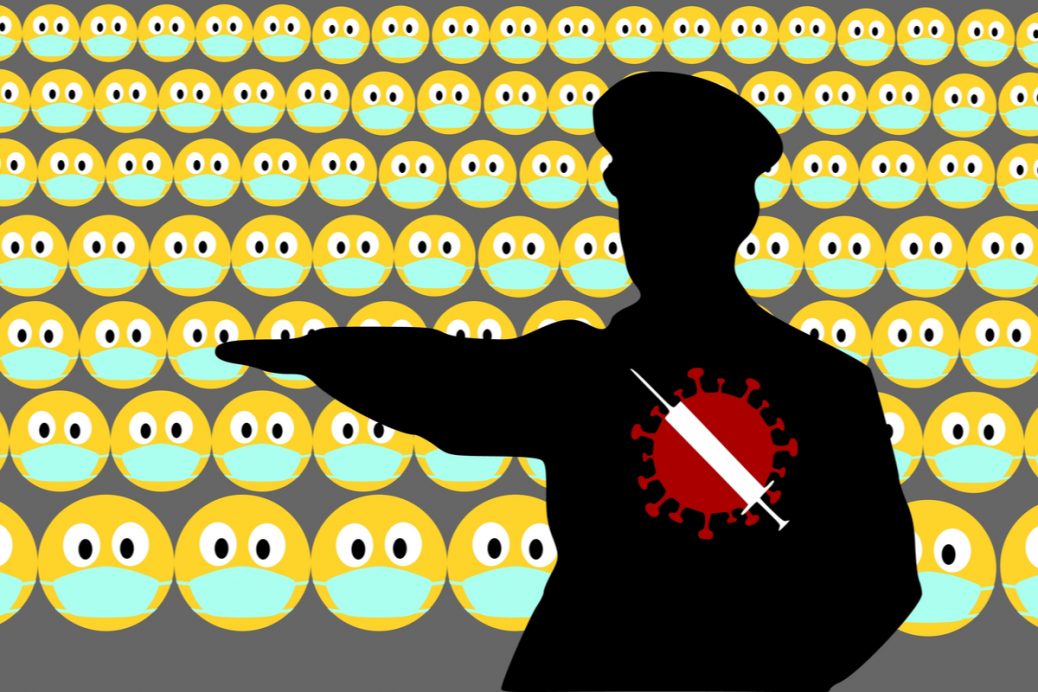 A new primer “How to Stop Disinformation,” put out by the Union Of Concerned Scientists (ucsusa.org), shows the tactics that authoritarians are now routinely using to silence and smear dissenting views.

Released on 1 April, the step-by-step “how to” is unfortunately no April Fool’s joke.

Instead the “explainer” offers tips on how to avoid debate, shut down “disinformation” with rhetorical tricks, and also advises flagging and reporting the speech of others, even in cases where such speech doesn’t violate current guidelines of social media platforms or online forums, etc.

In sum, the document is a breathtaking example of how low supposed objective standard bearers of society, scientists, have sunk in their willingness to suppress ideas and information that doesn’t align with their own corporate government aligned narratives and objectives.

The Union Of Concerned Scientists is itself an activist political group born in opposition to the Vietnam War. Their history states:

“The Union of Concerned Scientists was founded in 1969 by scientists and students at the Massachusetts Institute of Technology. That year, the Vietnam War was at its height and Cleveland’s heavily polluted Cuyahoga River had caught fire. Appalled at how the United States government was misusing science, the UCS founders, including Henry Kendall and Kurt Gottfried, drafted a statement calling for scientific research to be directed away from military technologies and toward solving pressing environmental and social problems.”

If the goal of the group was to create some appreciable space between MIT and the U.S. military, then it has failed spectacularly over the last 45 years.

MIT is and has been a major research arm of Federal military and intelligence projects, from well before the UCS was founded, right up to the present moment.

MIT’s student newspaper “The Tech” noted in 1988 that the school was the number one non-profit Department of Defense contractor in the nation. The prior year, MIT pulled in $407.6 million in DOD contracts, outdoing second runner-up Johns Hopkins University by $52.7 million.

In the mid-1990’s, an in-house study verified that MIT was the foremost biotech research partner of the U.S. government.  The study stated:

“MIT scientists have done pioneering work in molecular biology and genetic engineering, the basis of biotechnology, and in closely related fields such as immunology, virology and genetics. They:

MIT has also long been an epicenter for Artificial Intelligence research, and has partnered with the Federal government on technology with military applications in that sphere.

To give just one example, in 2019, The U.S. Air Force announced a partnership with MIT on an “AI Accelerator” project.

The overarching goal of the project has been “to create a state-of-the-art, end-to-end, sustainable pipeline for Artificial Intelligence technology to give the United States a competitive advantage in the defense and civilian sectors.”

So much for the original good intentions of the Union For Concerned Scientists with regard to distancing MIT research from deep and thorough U.S. military entanglements.

Today the UCSUSA is wholly in bed with government narratives and objectives, and rarely strays from that lucrative government funded plantation.

Their researchers and institutions reap huge rewards from patents shared with government entities on technology developed with taxpayer money.

During the COVID War, MIT long carried water for official narratives regarding the origins of the virus, proscriptions for lockdowns, masking, social distancing and other draconian policies.

MIT researchers notably worked with philanthro-predator Bill Gates on developing intrusive technology that was projected for possible use in a vaccine passport. An 20 April 2021 Trends Journal article by Dr. Gary Null noted:

“During a 2020 TED talk, Gates had already revealed that digital vaccine passports may be necessary; that part of his speech was edited from the original video, however, Robert Kennedy Jr. tracked down the original footage.  Gates has also 1) commissioned MIT to develop [an] injectable quantum dot dye system for children…” (see “IT’S TIME TO DISMANTLE THE WHO”)

The Trends Journal reported that some voices at MIT finally joined in the skepticism concerning the wet market “Bat” origin of COVID19 (see “LO AND BEHOLD: MIT TECH REVIEW HOPS ABOARD LAB LEAK TRAIN,” 28 Feb 2022). But they were very late to that party.

Avoid Debate, Become An Active Censor In Service Of The State

So what kind of activism marks the UCSUSA in 2022?

How about crushing dissenting voices speaking out against U.S. led NATO provocations that helped ignite a dangerous new hot war in Europe?

Their recent work has virtually nothing to do with opposing being a research arm of U.S. military and intelligence.

And in fact, the UCS explainer on “How to Stop Disinformation” embraces and crystalizes propaganda tactics that are currently fostering an abject conformity to government narratives on the Russia-Ukraine conflict.

The explainer starts off by lamenting, without any evidence, that “Presenting facts and evidence to counter a lie doesn’t often work, either.”

In other words, the paper dissuades people from seeking to engage each other in evidence or fact-based discussions, to try to seek the best information for making decisions.

Instead, people are advised to simply identify verboten viewpoints, described as “disinformation,” and to immediately act to suppress such communications by not sharing and not talking about them, etc:

When you encounter a piece of disinformation, the most important thing you can do is to stop it from spreading.

“Why? Even if you’re pointing out that it’s wrong, spreading the disinformation helps further the goals of the bad actors behind it.

“How? Algorithms. When you share, react to, click on, or otherwise engage with disinformation on social media, even to mock or debunk it, you’re telling a social media algorithm that the item is popular.”

For the concerned scientists of MIT, the goal is to make verboten discussions and ideas disappear as quickly as possible.

At one point, the paper gives a pathetic propaganda “tell” on its viewpoint concerning COVID gene-level therapies deceptively called vaccines, by likening the stopping of “disinformation” to a vaccine inoculation:

“Inoculation protects our bodies against viruses by exposing them to a weakened portion of virus. After inoculation, if we encounter the virus we’ve been exposed to, our bodies know how to shut it down. Protecting ourselves and others against disinformation works similarly.

“If we are on guard against disinformation, and alert others to it, research shows  that we tend to think more critically about the information we are encountering. Just reading these sentences has helped build up your defenses.”

After that drek, and offering some “helpful” advice on employing rhetorical propaganda to frame and discount information that may have already unfortunately made it into the minds and onto the lips of others, the UCS paper moves onto tactics for getting “disinformation” removed from social media platforms.

In another insidious piece of advice, the paper encourages engaging in campaigns against undesired online viewpoints, even when they don’t violate any rules or forum or social media platform guidelines currently in place.

The idea is to gin up opposition to make such viewpoints unacceptable, so that they are added to an ever growing list of off-limit “disinformation”:

“If you encounter disinformation on social media, flag it for the social media platform where you see it.

“While these guidelines might not currently cover all the disinformation you may encounter, they continue to evolve as the platforms grapple with the growing problem of disinformation—and it can still be worth reporting even if you’re unsure whether the guidelines cover that particular post.”

Given the disingenuousness and outright anti-intellectualism of the UCS explainer, it's unsurprising to see a definitive proof on the organization’s website that shows just how far it has strayed from its long ago intentions to separate MIT from the thrall of the U.S. military industrial complex.

One of their latest posts proudly displays an endorsement of U.S. and Nato intrigues and gambits that have played an unfortunate role in instigating the Russia - Ukraine conflict.

Their blog on the conflict mostly sticks to parroting government and uniparty lines about Russia and Putin, while covering favored tropes, such as the intersection of war and climate change.

To wit, here’s what passes for their war commentary in a recent post:

“It’s been over a month since President Putin launched a deadly and destructive war in Ukraine. Conditions continue to worsen, with the death toll rising rapidly, 4 million people forced to flee abroad, a quarter of the country’s population displaced, and the wider humanitarian and economic impacts increasingly evident. Restoring peace must be a priority for world leaders.

“The climate crisis, too, continues unabated, also requiring urgent solutions. Rather than viewing these as disconnected crises that must be traded off against each other for attention from world leaders, it’s time to connect the dots and push for transformative solutions that can improve people’s lives and create a safer world, now and in the future.”

Yes, there’s some vague gobbledygook in there about “peace.”

Bizarrely, the post mostly spews bile at Russia, not for its part in engaging in hot war, but for being a producer of dreaded fossil fuels:

“Burning oil, gas and coal is causing warming and impacts we need to adapt to. And Russia sells these resources and uses the money to buy weapons. Other countries are dependent upon these fossil fuels, they don’t make themselves free of them. This is a fossil fuel war. It’s clear we cannot continue to live this way, it will destroy our civilization.”

The finalf half of the post morphs entirely to a diatribe on clean energy, as if that were the subject all along.

With “anti-war” commentary like that, it’s little wonder that the UCSUSA can turn out toadying anti-information primers like “How to Stop Disinformation.”

A Much Wider Problem Of Censorship, Subverting Former Free Speech And Anti-War Groups

The embrace of censorship under the flag of stopping “dangerous disinformation,” goes far beyond an old-line MIT antiwar organization of scientists, of course.

“Following the row, Spotify is reported to have removed more than 110 episodes of Rogan’s show where they were seen to spread misinformation or guests used racist slurs. This though is not censorship. Removing content is an editorial decision. Young and Mitchell have succeeded where others have failed in forcing a major media platform to recognise its responsibilities as a publisher.”

With free speech friends like that, who needs enemies?