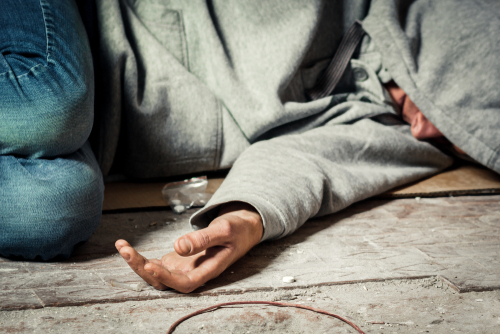 More than 100,000 people died from drug overdoses in the U.S. last year—a 15 percent increase from 2020—due in large part to the spread of illegal fentanyl throughout the country, the Centers for Disease Control and Prevention said.

Health officials blamed the increase on the proliferation of a synthetic form of the drug as well as the COVID-19 lockdowns which sucked the joy out of people’s lives, destroyed businesses, extended mental illness pressures and prevented potential and already addicted drug users from obtaining the help they needed.

The CDC said about two-thirds of those deaths involved fentanyl or some type of another synthetic opioid.

“We've never seen anything like this,” Robert Anderson, the chief of the mortality-statistics branch at the CDC's National Center for Health Statistics, told the paper.

Katherine Keyes, an associate professor at the Columbia University Mailman School of Public Health, told CNN in February that easing Covid-19 restrictions would not spur an immediate rebound when it comes to drug use in the community.

"You won't see a reversal in the same way you saw the acceleration because these drug distribution networks and addiction become embedded in the community. And it's not like they turn off overnight," she said.

Alaska experienced the largest percentage increase in overdose deaths in 2021, Axios reported. The state saw a 75.3 percent jump in deaths.

Dr. Rahul Gupta, director of the White House Office of National Drug Control Policy, told the website, “It is unacceptable that we are losing a life to overdose every five minutes around the clock."

TREND FORECAST: The Trends Journal had forecast drug addiction, along with crime, would spike when politicians, without a scintilla of scientific data to support their draconian mandates, locked down much of the nation. (See “FENTANYL: A KILLER OPIOID", “COVID LOCKDOWNS INCREASE DRUG ABUSE” and “SADLY, AS FORECAST: FIGHTING THE COVID WAR=RECORD-BREAKING OPIOID DEATHS.”)

Adding to that is the proliferation of illicit fentanyl (often produced, according to the Drug Enforcement Administration, by Mexican cartels using ingredients from China) added to other drugs (whether illicit heroin or bootleg replicas of prescription drugs), often unbeknownst to the consumer; see "FENTANYL: A KILLER OPIOID" (20 Apr 2021) and "COVID WAR = FATAL DRUG OVERDOSES" (20 Jul 2021).

As we noted in "THE OPIOID WARS" (22 Oct 2019), it all started when OxyContin (a timed-release version of the opioid analgesic oxycodone) was approved by the FDA under Bill Clinton in 1996, and within two years prescriptions increased by 11 million.

A little history: Purdue Pharma promoted and marketed OxyContin via a sophisticated program that included all-expenses-paid conferences in California, Arizona and Florida for some 5,000 doctors, nurses and pharmacists, as well as profiling to identify the most frequent (and sometimes least discriminate) prescribers of opioids; it also paid out $40 million in bonuses for increasing OxyContin sales. And it produced a promotional video in which a doctor claimed the drug "had no serious medical side effects."

The result was widespread dependency, far beyond medical necessity, among Americans who would otherwise not be using illicit drugs, and who, when access to prescription opioids was tightened by the government, found themselves turning to heroin and bootleg opioids.

On Friday, Idaho officials announced a $119 million settlement with Johnson & Johnson and distributors over their role in the opioid crisis in the state.

Rep. Paul Gosar, R-Ariz., an outspoken critic of the U.S. intervention in Ukraine, took to Twitter to point out the attention Kyiv has received in recent months while the U.S. struggles with the drug epidemic.