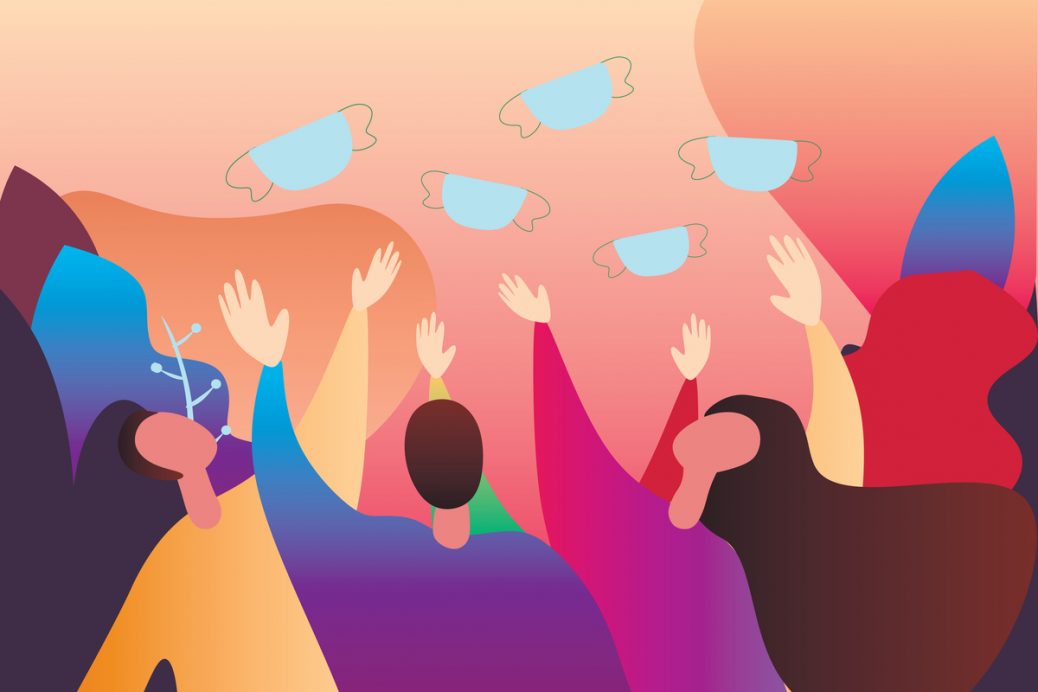 With the mid-term political elections heating up and the general public worn down after two years of fighting the COVID War, the Centers for Disease Control and Prevention announced Friday a change in its mask guidance and said face coverings are no longer needed in communities where hospitals are not at risk of overcrowding due to new COVID-19 cases.

The report said about 70 percent of Americans—under the current guidelines—are no longer required to wear these face coverings in public spaces—including indoors and at schools.

Spewing out pure bullshit, since, as The New York Times reported that “experts now calculate the herd immunity threshold to be at least 80 percent”—and the U.S. double vax rate is just 64 percent—CDC head Dr. Rochelle Walensky credited “widespread population immunity,” as the reason for allowing more people to go mask-less.

“This updated approach focuses on directing our prevention efforts towards protecting people at high risk for severe illness and preventing hospitals and healthcare systems from being overwhelmed,” she said.

TRENDPOST: Again, CDC pure hypocrisy and incompetence is front and center, but completely ignored by the mainstream media that was their partner in selling COVID fear and hysteria.

As we have repeatedly detailed with hard facts and scientific data when the COVID War broke out, those dying from the virus were mostly elderly and 94 percent of the victims had 2.6 preexisting comorbidities.

And rather than locking down nations and robbing citizens of their freedoms, we had long recommended taking measures to protect those at the most high risk... measures that the CDC is now repeating, two years later.

TRENDPOST: The CDC has been inconsistent with its messaging on face coverings, and that has led to public confusion about the pros and cons. (See “NEW CDC CLAIM: ‘TWO MASKS BETTER THAN ONE,” “FACING THE TRUTH, PART II: MORE EVIDENCE MASKS ARE INEFFECTIVE” and “WEAR MASKS, BREATHE TOXIC PARTICLES.”)

A new study released in February claimed that titanium oxide particles—which are frequently present in face masks—should have regulatory control because the particles could cause cancer.

“Oops,” Michael Levitt, a biophysics professor at Stanford tweeted, with a link to the study in Nature.com. “Science just realized that masks could be bad for you.”

StudyFinds.org also reported that it could take up to 450 years for the ubiquitous single-use face mask to degrade, which could be devastating for the environment, given that China alone produces up to 450 million per day.

Researchers from Swansea University in the U.K. found that there are significant amounts of toxins found in these masks after exposure to water, including lead, copper, and antimony.

“All of us need to keep wearing masks as they are essential in ending the pandemic. But we also urgently need more research and regulation on mask production, so we can reduce any risks to the environment and human health,” Dr. Sarper Sarp of Swansea’s College of Engineering said in a statement in December.

TREND FORECAST: In the 30 March 2021 Trends Journal, we featured an article titled, “SPERM DOWN FOR THE COUNT, PENISES FALLING SHORT.”

In the article, we reported that Dr. Shanna Swan, a professor of Environmental Medicine & Public Health at Mount Sinai Health System, has warned that phthalates, a chemical commonly used in the manufacturing of plastics, can shrink penises and decrease male fertility.

And now, with more people wearing masks, the “penis-shrinking” trend is speeding up. The National Library of Medicine and the National Institutes of Health found that the microplastics used in the manufacturing of COVID face masks contain a number of toxic chemicals, including penis-shrinking phthalates.

TRENDPOST: Over the past three months, the Trends Journal has kept subscribers up-to-date on the scientific data showing the fallacy of mandatory mask-wearing and lack of hard evidence that wearing cloth face masks offers any real protection from COVID. Here are links to some of our articles on the subject:

The CDC said it still recommends masks in areas where the risk of infection is considered elevated, which is about 37 percent of U.S. counties, The Associated Press reported.

According to an AP and University of Chicago’s NORC Center for Public Affairs Research poll, some 50 percent of Americans still want forced face coverings in public... down from about 75 when compulsory mask-wearing was first enforced.

And the mask wearing “for and against” are politically divided with 77 percent of Democrats still pro-mask mandate, compared with 53 percent of Republicans.

Further illustrating the COVID War anxiety anomalies, 28 percent of the fully vaxxed are extremely or very worried that they can still get COVID while only 13 percent of unvaccinated Americans are worried about contracting the virus.