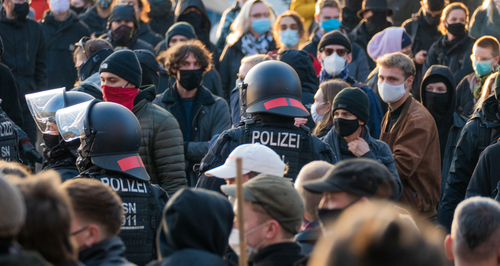 Despite the fact that as of early December, nobody who was diagnosed with the COVID-19 Omicron variant has died—and the strain is believed to be much milder than Delta—that did not stop British Prime Minister Boris Johnson from imposing his so-called ‘Plan B’ to stop the spread.

Johnson, who has been under fire over a leaked video that showed aides last year mocking the previous mandates, said people should resume working from home, wear masks in public, and show their vaccine passports at various events. Reuters reported that Johnson’s decision was described as a “hammer blow” for city restaurants and other shops that depend on holiday traffic.

“The renewed ‘work from home’ order during the most important trading period of the year is a hammer blow for our retail and leisure tenants,” Jace Tyrrell, the head of New West End Company. Johnson has faced blowback from within his own party, who called vaccine mandates “discriminatory.”

The Trends Journal has reported on the devastating impact that lockdowns have had on businesses globally. (See “EUROPE: MORE LOCKDOWNS, PROTESTS, ECONOMIC HARDSHIP,” “COVID-19: THE VIRUS OF GOVERNMENT SUPPRESSION” and “VAX WAR: THE SHOT HEARD AROUND THE WORLD.”)

“We are seeing growth in cases here in the U.K. that now mirrors the rapid increases previously seen in South Africa,” Johnson said, according to The New York Times. “And South Africa has also seen hospitalizations double in a week.”

The paper pointed out that 80 percent of the population in England has received both jabs.

The Omicron variant—which became the media’s variant du jour on Thanksgiving weekend—has raised concerns from world leaders that worry about its ability to spread. (See “OMICRON: WE DON’T KNOW IF VACCINES ARE EFFECTIVE, BUT YOU MUST TAKE THE JAB.”)

We pointed out last week that bankers from JPMorgan hope that the Omicron variant marks the beginning of the end for the virus, based on the hope that if more people get infected by a milder virus, the disease will eventually burn itself out and become something akin to the flu.

One of the unfortunate things to emerge during the COVID-19 outbreak, is the sense of entitlement elected officials have over the serfs they reign over. (See “ONTARIO FINANCE MINISTER: ANOTHER POLITICAL JOKER.”)

Video emerged that showed Allegra Stratton, the top aide for Johnson, holding a mock-press conference appearing to joke about a Christmas party held at Downing Street last year when the government ordered people to stay home and not socialize.

Stratton resigned and said she would regret the comments for the rest of her life. Johnson insisted that he knew nothing about the party or the video. He vowed an investigation. Johnson’s move to require a vaccine passport to enter public events has been mocked since his own staffers made light of earlier restrictions.

Six months ago, Johnson celebrated “Freedom Day,” which was supposed to represent the U.K.’s emergence from COVID-19 restrictions. The plans were to remove curbs that put limitations on restaurant and club capacities. The thought was that vaccines would be able to counter the virus and stop transmission. That did not pan out.

Governments like Britain, Germany, and Austria have singled out the unvaccinated in many of the new restrictions, which has sparked violent protests and raised the question of just how far governments can reach under the auspices of protecting the public.

Johnson has been forced to clarify earlier comments that there needs to be a “national conversation” about mandatory COVID-19 vaccines. (See “THE CHINESE WAY: MANDATORY VAXXING.”) Sajid Javid, his health secretary, told Sky News that he has “no interest in mandatory vaccination apart from high-risk settings in the NHS [National Health Service] and social care, which we have already set out we will legislate for. Other than that, if you’re talking about universal mandatory vaccination, I think ethically it is wrong.”

TREND FORECAST: These re-imposed COVID War measures will further drag down economic growth while escalating populist anti-vax, anti-establishment movements. Ignoring the facts of broad-based citizen outrage against draconian measures being imposed upon them by politicians and bureaucrats, the media will continue to moronically label those fighting for freedom as right-wing conspiracy theorists.

GERMANY: Olaf Scholz, the establishment politician who became Germany’s ninth post-WWII chancellor last week, fits the breed of another arrogant pathological liar who lied his way into office. As a candidate, he said he would not impose mandatory vaccinations, but now he is in favor of the move.

Scholz said that he would ask parliament to take up a vote on a bill that would make COVID-19 vaccinations mandatory. DW.com reported that forcing individuals to take the jab polls well in the country. The World Health Organization has said mandatory vaccinations should be a move of “last resort.”

“I myself will vote for compulsory vaccination because it is legally permissible and morally right,” he said.

There was recently a torch-lit protest outside the home of Petra Köpping, the health minister of the German state of Saxony, that was reportedly organized by the Free Saxons, that the media, their opponents, label “right-wing extremists.” They were out there on Friday to lash out against mandatory vaccinations and new COVID-19 mandates.

“I am convinced that the vast majority of unvaccinated people find these torch-lit rallies as repugnant as I do,” Scholz said, according to the paper.

Over a dozen police officers were injured during a demonstration against new restrictions in Greiz, a town in central Germany, on Saturday. DW.com reported that about 1,000 "formed a procession on a bridge" and some tried to break through police lines. Police fired tear gas.

Ulrich Weigeldt, the head of Germany’s general practitioners’ association, told Bild that a fourth booster will likely be needed for later this year to keep the population safe from new variants. (See “SELLING BOOSTER SHOTS, CDC’S WALENSKY SAYS ‘FU’ TO AGENCY ADVISERS,” “THE VAX/BOOSTER MARKET: DRUG DEALER ON PARADE” and “COVID BOOSTERS ARE THE FUTURE?”)

“We expect that by summer, or fall at the latest, a fourth vaccination will be necessary,” he said, according to DW.com. The report said about 1.1 million Germans have taken their third jab.

TREND FORECAST: The anti-vax, anti-establishment, anti-immigration movements will continue to build in many Western nations. Indeed, the stricter the mandates the deeper economies will decline and the greater the levels of social unrest will rise.

AUSTRIA: Some 45,000 Austrians staged a rally on Saturday in Vienna to express contempt over forced vaccinations and stay-at-home orders for those who have refused to take the jab.

The country, which is the first in the European Union to mandate vaccination, has caused an uproar.

The report said that vaccinations will be mandatory starting in February for all citizens over 14. The Trends Journal reported on the unprecedented move in the 16 November issues, in an article titled, “AUSTRALIA: NO VAX, NO FREEDOM.”

Chancellor Alexander Schallenberg said at the time that the country did not take the step “lightly,” but insisted that it was needed.

Vienna announced entry bans for the unvaccinated, “effectively barring them from public life, including at bars, restaurants, cafes, theaters, hotels and—significantly in the Alpine nation—ski lodges.”

Vienna has said it will not physically force anyone to take the shot, but the unvaccinated will have to pay a $670 fine, which could increase to $4,000.

Many of the protesters would not give their full names in interviews with news outlets, because they know that their reputations would be destroyed. A 44-year-old violin teacher told the outlet, “We can have different opinions and values, but still live together freely.”

The weekend marked the fourth consecutive in which protesters lashed out against government mandates in the city. Johns Hopkins University counted 1.2 million cases in the country of 8.9 million and 13,000 deaths. About 68 percent of the country is vaccinated, which the BBC pointed out is among the lowest in Western Europe.

Police announced that three people were arrested in Heldenplatz square on offenses that included launching fireworks at officers and disregarding the mask mandate.

SPAIN: For the second week in a row, tens of thousands of protesters took to the streets of Barcelona against the latest round of virus restrictions for the unvaxxed.

LUXEMBOURG: A few thousand people protested against the latest round of covid mandates that are imposed upon the un-vaxxed. The police fired water cannons at demonstrators who broke out of the security zone imposed by the police and arrested a few dozen.

CZECHIA: Tens of thousands marched through Prague on Sunday, protesting the latest round of COVID-19 vaccination mandates. As with all the anti-COVID War demonstrations erupting across much of the globe, the Prague protesters were chanting “Freedom!”... demanding that their constitutional rights could not be stolen from them by politicians in power.

GREECE: As they have for several weeks, the anti-COVID War protests again erupted in Athens, with police confronting demonstrators. The unvaccinated are being punished in other ways.

The un-vaxxed are banned from eating inside restaurants, bars, theatres and gyms. To enter banks, government buildings and non-essential shops, they must present a 48-hour rapid Covid test.

UKRAINE: While the U.S. and European media continually promotes that Russian troops are at the Ukraine border, hardly a peep about the tens of thousands who took to the streets this weekend in Kyiv. As with most of the other protests, the demonstrators are not anti-vax, but rather pro choice, in that those who wish to get the shot should do as they please, and those who do not want the Operation Warp speed inoculation should not be forced to get the jab.