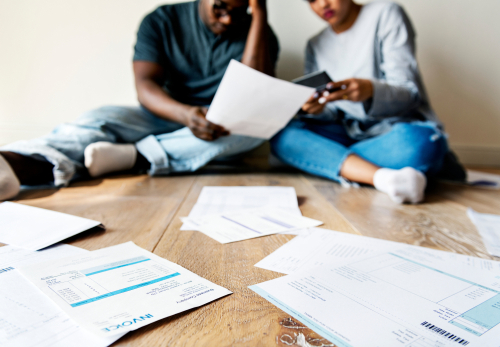 About 40 percent of U.S. households have experienced serious financial problems over the past few months and 69 percent of families with elementary school-aged children say their child has fallen behind due to the COVID-19 outbreak.

The survey—which included 3,6000 adults and was conducted in the late summer—found that Latino and black households reported the highest percent experiencing hardships, at 57 and 56 percent, respectively. About 29 percent of white responders reported serious financial hardships.

The Trends Journal has long predicted that the coronavirus outbreak will hurt the middle class and poor Americans, while the country’s richest will feel little to no pain. In fact, the richest Americans have seen their wealth surge during the epidemic. (See “BILLIONAIRES BEAT TAXES: LITTLE PEOPLE PAY,” “AMERICA’S RICHEST 400 FAMILIES PAY A TINY PERCENT OF FEDERAL INCOME TAX COMPARED TO THE WORKING CLASS.”) We pointed out at the time that the late-great comedian George Carlin once said, “It’s one big club and you ain’t in it.”

Our 5 October 2021 issue also has an article titled, “DOLLAR GENERAL EMPLOYEES: PLANTATION WORKERS OF SLAVELANDIA,” that pointed out the horrid conditions that these employees face while earning minimum wage.

The article said, “The game is rigged. From stocks to businesses, the one percent control and own what used to be called, 'The Land of Opportunity.' The rich in the U.S. keep getting wealthier, and the expendable, working-class has never been more desperate to work at menial jobs with little pay and recourse.”

The recent study was conducted by NPR, the Robert Wood Johnson Foundation and the Harvard T.H. Chan School of Public Health. The survey found that 59 percent of houses with an income of $50,000 a year or lower have reported serious financial problems.

TRENDPOST: Last week, Ron Klain, the White House chief of staff, was criticized for being out of touch when he retweeted a post from a Harvard professor who called inflation and supply chain issues “high class problems.” The retweet sparked debate on social media and forced the White House to clarify his position. Another jump in consumer prices in September sent inflation up 5.4 percent from a year ago, which matches the most dramatic increase since 2008.

Robert Blendon, the co-director of the survey and emeritus professor of health policy and political analysis at Harvard, said many Americans are “still caught in the middle of the impact of the Delta variant and COVID epidemic.”

“It’s not over for them financially. We’re in the middle of a period of real peoples’ lives where they’re still in a lifeboat worried about getting to shore.”

TREND FORECAST: We forecast there will be growing political movements against the 1 percent as the “Greatest Depression” worsens and incomes decline... while federal, state, and city taxes are raised on consumer goods and services, school and property, etc.

TRENDPOST: Beyond the U.S., income inequality is a global trend. As we have been reporting in the Trends Journal, Oxfam research shows the world’s 2,000 billionaires have more combined wealth than the 4.6 billion people who comprise 60 percent of the world’s population.

TREND FORECAST: Our “OFF WITH THEIR HEADS 2.0” trend from December 2019, forecasting the global rise in anger directed at the 1 percent, was already spreading globally prior the 2020 COVID War.

The great wealth gap followed by the destruction of small businesses by politicians who launched the COVID War while allowing the Bigs to get bigger will be a key platform in the formation of new political parties across the globe. As the gap between the rich and poor widens, so, too, will the animosity between the “haves” and “have nots.”

Gated communities will increase in popularity and more private security will be hired by the haves who will be gangland targets.