COVID KILLING SEX? OR IS IT “SCHLUBBY” 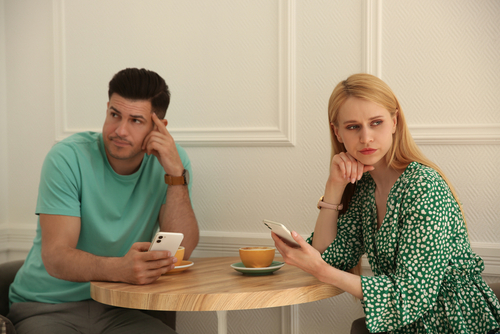 As if the lockdowns, the rules and restrictions, the mask-wearing, the vaccine mandates (and the vaccine side effects!), the social distancing, the scrambling to find toilet paper (and now so many other items in short supply) and the COVID-19 virus itself (not to mention the dreaded Delta variant) haven't caused enough worry, fear, loneliness, boredom, and just plain old physical, emotional and mental stress, one more thing can now be added to the list of ways the COVID War has taken the joy out of our lives.

The Wall Street Journal reports, on 20 October, on a new study by researchers at Texas State University and the Kinsey Institute at Indiana University. Listen up, Class! Who remembers what the Kinsey Institute is known for? That's right, it's the research institute dedicated to the scholarly study of human sexuality.

And the study has found an inverse relationship between the stress people are under—from COVID this and COVID that—and the degree of sexual attraction and desire they feel for their partners; interest in having sex is, according to the study, at its lowest ebb since the COVID War began.

A big part of the problem, the researchers say, is the effect that body image has on the libido. All that staying home, over-eating and over-drinking, failing to work out because the gyms were shut down, letting their grooming go (day spas, hair salons and barbershops were shut down, too) and generally becoming chubby and unkempt has all coalesced into a general feeling, the WSJ article tells us, of being "Schlubby" and unattractive.

TRENDPOST:  For those who may be unfamiliar with the term "schlubby," an entry in "The Joys of Yiddish" by the late Leo Rosten lists "zhlub," derived from the Slavic "zhlob" and meaning "a coarse, graceless person".

As such, there's a strong overlap with what the etymologists at Trends Journal posit: that "schlubby" may be a variation on "shlump," which Rosten says derives from the German "schlumpe," meaning "a slovenly female." In Yiddish, "shlump" can be a noun meaning a drip, a wet blanket, a person of poor posture who takes little pride in his or her appearance, or a verb meaning to shuffle or drag oneself about in the manner of such a person.

But in the politically correct age of America, (which is an oxymoron since nothing “political” is correct), Schlubby actually means getting fat... but “fat” is a dirty word. Indeed, the woman they quote in the article whose husband doesn’t want to have sex with her, says from eating cookies, candy etc., and not exercising, “I’d gotten bigger and softer.”

So, what remedy do the researchers recommend to counteract this epidemic of "schlubbiness" and depressed sexual desires where partners are too Fat to F#CK?

TRENDPOST: Wasn't that easy? Forget sexual desire... just jerk your mind off. Uh, there's one more thing, and it may reveal something about the WSJ. One of the examples of couples dealing with COVID-induced lowered libidos reads as follows: "A realtor in Pittsburgh suggested to ‘his’ husband that they start sleeping in separate bedrooms...so he could avoid being intimate"!

Also, while the mainstream media sells the BS that only poor people are obese and overweight because they cannot afford good food (which is not true since they spend their food stamps on junk food, soda etc.), the WSJ article focuses on the upper middle class that are over the weight limit as are 70 percent of Americans.