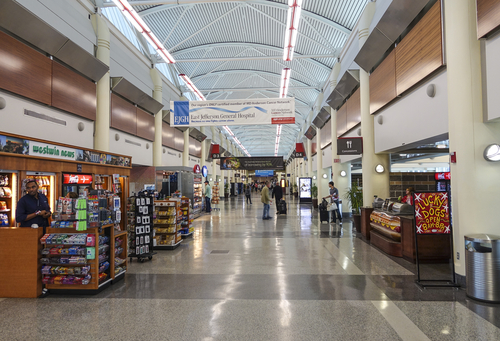 A growing number of retail workers have expressed concern for their safety after recent incidents across the U.S. that unfolded inside stores and resulted in deaths and injuries.

Kim Cordova, the president of Local 7 of the United Food and Commercial Workers in Colorado, told The New York Times that she has worked in the industry for 37 years and has never experienced the animosity from customers that she does now.

“What happened with COVID? she asked. “People have changed. Sometimes I wonder if I am living in a Netflix movie. This can’t be real.”

The Centers for Disease Control and Prevention said retail work is one of the highest risk jobs for workplace violence, which can range from fighting, shooting, and sexual harassment. There have been mass shootings at these workplaces in Denver and in Buffalo.

The Times said the number of assault cases at these businesses have been increasing since the COVID-19 lockdowns. The report cited a study from the FBI that found a 42 percent jump in overall assaults from 2018 to 2020. The report said these assaults jumped 63 percent in grocery stores and 75 percent in convenience stores.

“A lot of people are angry and frustrated and take it out on workers,” Kyong Barry, front end manager at Safeway in Washington state, told the paper. “People are very touchy right now. There is something in the air. It is strange.”

UNI Global Union found that Covid-19 has triggered a pandemic of violence against retail workers around the world. The studies show that these workers are at most risk “when asking customers to comply with Covid-19 restrictions such as mask wearing and social distancing. In the US, a retail worker was even shot dead for asking a customer to wear a mask.”

The paper said there were two million assaults in the U.S. that were reported to the FBI in 2020, and of those, about four percent occurred inside a retail facility.

The UNI cited the SDA union in Australia that found one in five workers “said they had been coughed on or spat during the pandemic, with 88 percent of respondents to an SDA survey saying they had experienced verbal abuse from customers.”

The Washington Post reported that nearly 700,000 retail workers resigned in April, which was the biggest exodus in 20 years.

TRENDPOST: The Trends Journal has pointed out since the beginning of the virus when the mainstream media promoted lockdowns that killed millions of lives and livelihoods in the U.S.

TREND FORECAST: As the data proves, and as we had forecast, the lockdowns and mandates imposed by autocratic politicians have destroyed the businesses, lives and livelihoods of hundreds of millions—if not billions—of people.

When the COVID War began, the Trends Journal had forecast drug addiction, along with crime, would spike when politicians, without a scintilla of scientific data to support their draconian mandates, locked down much of the nation. (See “FENTANYL: A KILLER OPIOID," “COVID LOCKDOWNS INCREASE DRUG ABUSE” and “SADLY, AS FORECAST: FIGHTING THE COVID WAR=RECORD-BREAKING OPIOID DEATHS.”)