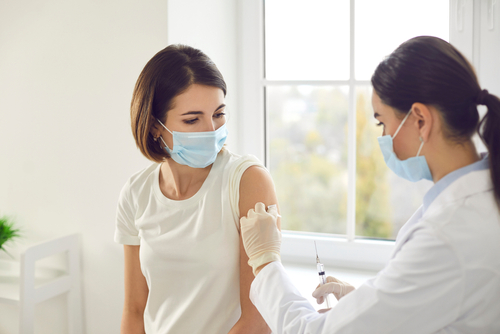 It’s old news to Trends Journal subscribers and those who follow Dr. Joseph Mercola and RFJ, Jr, but now that the information has hit the mainstream media, it is no longer a conspiracy theory... it’s “official.” About half of the women who took part in a recent study published Friday in the journal Science Advances reported heavier-than-normal periods after they received the COVID-19 vaccine.

The study was conducted by researchers at the University of Illinois at Urbana-Champaign and Washington University School of Medicine in St. Louis. They analyzed data from about 40,000 women and transwomen and found 44 percent of the respondents reported heavier bleeding after taking the jab, The New York Times reported. About 44 percent said they did not experience a change and 14 percent reported lighter periods, the report said.

The researchers said women should not be concerned and that the data hopes to dispel misinformation about the vaccine’s impact on reproductive health.

Social media users voiced outrage after the study was released and asked why women were not informed that their menstrual cycles could change—even temporarily. UC Davis issued a press release in January 2021 that dispelled any suggestion that the vaccine could impact periods.

According to the CDC’s own Vaccine Adverse Event Reporting system database (VAERS), the number of COVID vaccine deaths and serious adverse events and injuries surpasses all previous vaccines in the history of vaccinations combined.

Previously, if any vaccine released to the public resulted in even a fraction of the deaths and serious injuries that the COVID vaccines have caused, those vaccines were pulled, as was the case in the 1970’s with a swine flu vaccine. In that case, the swine flu vaccine program was discontinued after barely a hundred reported deaths.

The CDC released information about fourth doses for people considered to be immunocompromised over 12 years old. Out of 4,015 doses from January to March 2022, local injection site reactions were reported by 1,605 individuals. The most frequently reported adverse reactions after the fourth jab of either vaccine were injection site pain, fatigue, headache, and myalgia, the report said.

VAERS received 421 reports from persons who received a fourth dose. About 72 percent of these cases were female and most were “non serious events.” One nonserious, preliminary report of myocarditis remains under review, the report said.

There were 17 reports of serious adverse events. One report of death was received from a manufacturer regarding a patient with pulmonary fibrosis who developed respiratory failure; at the time of publication, no further information was available, and follow-up continues, the website said.

TRENDS FORECAST: Now that Dr. Anthony Fauci came out and admitted that the vaccines are far less effective against COVID-19 transmission due to mutations, you would think that vaccine mandates would disappear as quickly as a booster’s efficacy.

But that has not happened. The Biden administration still wants to enforce vaccine mandates in the military and is fighting tooth and nail to require all federal employees to be vaxxed. (The case is playing out in a federal appeal court in New Orleans.)

Just before Halloween, the CDC will announce that Pfizer and Moderna came up with a vaccine tailored for the BA. 5 variant and others to follow. Other countries are already monitoring a BA.2.75 variant that has been nicknamed “Centaurus.”

The initial vaccine was rushed out in 2020 under Operation Warp Speed, so health officials continue to study the impact of these jabs on the general population, because they don’t know the short-term or long-term side effects of these experimental gene therapy jabs... the first of the kind ever injected into a human body.