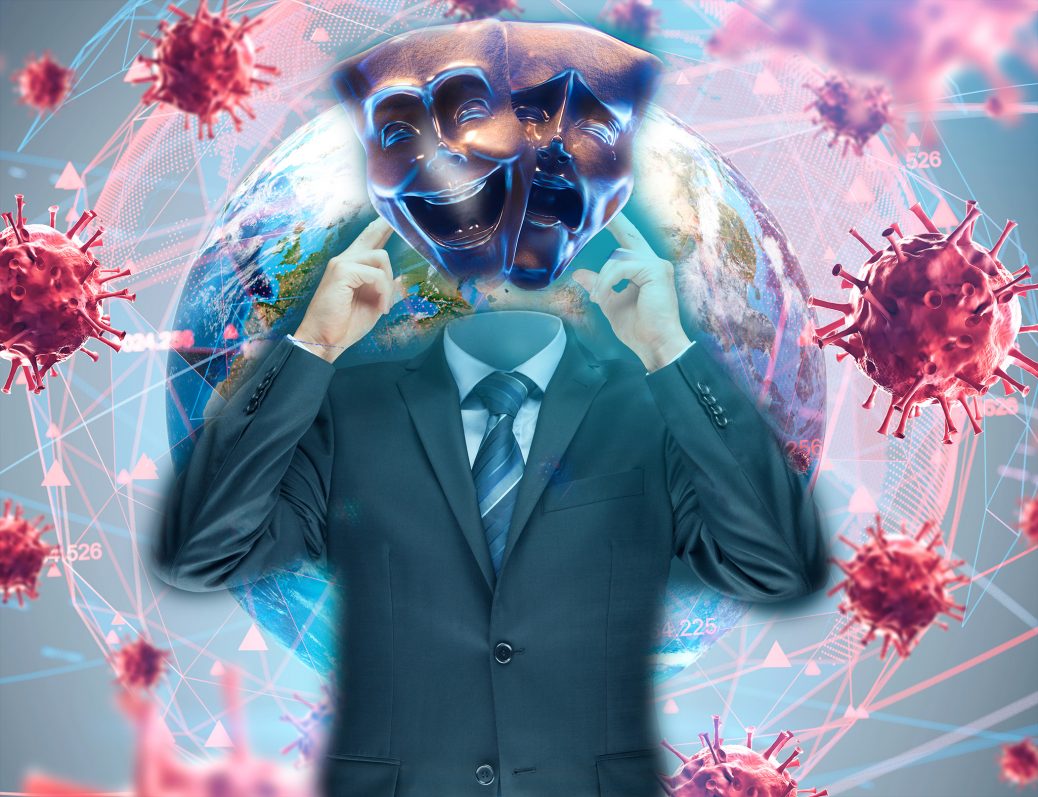 As Gerald Celente has stated many times, politicians are quick to wage war despite no exit strategy. The same arrogant, incompetent, and bullying mindset is obvious in the COVID-19 War the politicians launched in February, which virtually shut down economies and put hundreds of millions worldwide out of work and into social isolation, with no rational or scientific exit strategy.

Again, as we have continually reported in the Trends Journal, name the country, state, city, or village across the globe and there are different Executive Orders: different rules and warnings on what to do, where you can do it, how you can do it, and when to do it. In effect, they are making it up day by day.

Since the dictates are being drawn among party lines in many nations, so, too, is the new divide between citizens: those who believe in the COVID orders from their party leaders vs. those who are opposed to them.

And, beyond the political dictates, corporations are also inventing new invasive policies that employees and customers must obey in the “New ABnormal.”

TRENDPOST: Yes, by the facts, both public and private sectors are creating stringent “must obey” rules that, by what is being reported, are totally made up. And, there is virtually no pushback from the media, which only bring on “experts” who agree with their agendas and beliefs.

As we noted from the onset, the mainstream media’s agenda is to sell fear and hysteria to boost their ratings. (See our 5 May article, “CNN, HOW LOW CAN YOU GO?”)

And it does not stop.

Despite the facts that the numbers are dropping, which is cause for a lowering of anxiety and the hope of a return to some type of socioeconomic normalcy, the Times sinks lower by telling readers to remain in fear, even while admitting the “Trajectory is Uncertain.”

As for the “Very Steps That Curbed the Virus,” this is pure propaganda. As we have continually detailed in the Trends Journal, there are states and nations which imposed no draconian rules and have much lower death rates from COVID-19.

In fact, New York State, which is among those with the strictest lockdown laws, has the highest death rate per capita in the world. With some 28,400 deaths attributed to the virus, it ranks third highest in in the world.

Being the “Toilet Paper of Record,” the Times ignores the hard data that some 50 percent of virus victims are chronically ill elderly “locked down” in nursing homes and those suffering from high blood pressure, diabetes, obesity, heart conditions, respiratory ailments, etc.

The Times also fails, in their fear-selling headline, that which the Associated Press states: “For most people, the coronavirus causes mild or modest symptoms, such as fever and cough, that clear up in two to three weeks. For some, especially older adults and people with existing health problems, it can cause more severe life-threatening illness, including pneumonia and death.”

The Times is against opening up the economy and for the continuation of polices that have led 36.5 million people to file for unemployment, destroyed businesses, and have launched the “Greatest Depression.”

These are but a few examples of the made up stupidity dictated by political rulers:

And, as with other dictates ignoring the commonsense that sea breezes blow across beaches, the Governor not only imposed the six feet social distancing rules, but if the beach is too crowded, masks must be worn.

Why? Because in announcing the restrictions, Governor Cuomo commented, “Do not underestimate this virus or play with this virus… Nobody can tell you exactly what happens, nobody has been here before.”

Yet, despite “nobody can tell you exactly what happens” and “nobody has been there before,” Cuomo knows best… issuing Executive Orders not knowing what will happen and not having been there before.

Why did Cuomo open the beaches?

Not because of scientific data or other research, but because “If other states were opening and New York wasn’t, you would have millions of people from New York flooding those beaches… and that wouldn’t help anyone.”

TRENDPOST: What difference would it make if other states open their beaches and New York didn’t?

Indeed, Cuomo’s opening up of beaches violates his draconian shelter-in-place rules, which he renamed “New York on PAUSE.”

Therefore, he is using the excuse that New Yorkers would flood other state beaches rather than taking responsibility for doing it.

And, if some two-thirds of the states across the nation are opening up their economies, why isn’t King Cuomo opening up New York?

Because of his power trip: “I, Andrew M. Cuomo, Governor of the State of New York, by virtue of the authority vested in me… hereby temporarily suspend or modify, for the period from the date of this Executive Order through June 13, 2020”… thus extending his authority to rule over his 20 million subjects.

Adding to the COVID comedy of errors, New York City Mayor Bill de Blasio declared it was “not in the cards” to open the beaches by Memorial Day weekend: “We can’t have crowds, we can’t have gatherings, we can’t have people going to the beach, we can’t have the boardwalk get crowded, we’ve got to protect against the problems that come with people being in too close proximity in this pandemic.”

Doubling down on the double standard reasoning of Cuomo opening New York beaches to stop people from flooding to surrounding states beaches, New York politicians representing areas where the beaches will be open are concerned that de Blasio’s ruling will have people from NYC overflowing their beaches, creating a “chaotic and untenable situation.”

Despite fears that opening up businesses and freeing citizens from lock downs will raise the virus rate, on Sunday, U.S. Health and Human Services Secretary Alex Aza said, “We are seeing that in areas that are opening, we’re not seeing the spike in cases, “but we still see spikes in some areas that are, in fact, closed.”