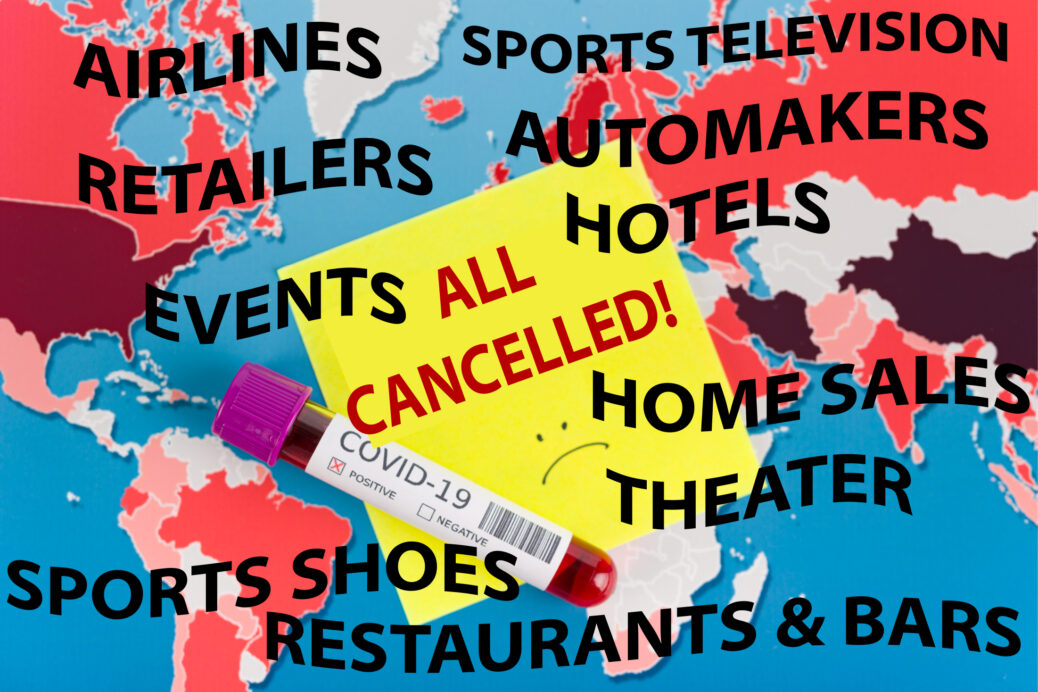 Early estimates have forecast that the coronavirus will cost the global economy at least $2.7 trillion, a figure that seems more and more conservative as the panic grows.

The losses will be spread across all sectors in virtually all countries. Among the hardest hit:

Airlines. Millions of flights already have been canceled around the world. Carriers’ stock prices, already suffering, sank further after the U.S. restricted European travelers’ entry last week. The stricture is expected to impact up to 35,000 flights and 800,000 travelers per week.

Airlines’ stock shares have tumbled 10 to 30 percent during the virus panic.

To hoard capital, airlines have put off hiring workers and buying new planes. The virus is expected to cost the industry at least $100 billion worldwide.

Aircraft makers also are in a tailspin, with orders for new planes canceled or postponed.

The virus crisis has compounded troubles for Boeing in particular.

It had arranged a $12 billion loan to deal with the grounding of its 737 Max airliner after two fatal crashes. The company is paying airlines $18.6 billion to compensate them for the loss of the Max planes’ use and continuing to pay employees even though they’re not building new planes.

Creditors increased the loan to $13.1 billion, and Boeing has now used all of it.

Automakers. China’s car sales dropped 80 percent in February compared to February 2019, a year which saw the continuation of a sales slide that began in 2018. Ford and General Motors have moved aggressively in the Chinese auto market but both saw sales fall in 2019.

Kia stopped its South Korea production lines after key parts from China disappeared. General Motors says it will run out of parts from China no later than the end of this month. Mexico, where 3 percent of the economy is grounded in vehicle production, expects to shutter its plants by April. Fiat Chrysler and Volkswagen have temporarily closed plants in Italy.

Events. Seasonal fairs and festivals, trade shows, and similar events create millions of temporary jobs and can be a staple of one-person businesses such as crafting and food carts. From St. Patrick’s Day parades and the Big Ears Festival to the Mobile World Congress, annual traditions are being canceled wholesale, lopping billions from the global economy.

Also, after the housing crash of the Recession, developers built more apartments and condos and fewer single-family homes. But rents often are high compared to younger adults’ incomes, making it hard for them to save for a down payment.

About 40 percent of annual home sales take place in March through June, but fear of COVID-19 is keeping potential buyers from open houses and venturing into strangers’ homes, analysts say.

Hotels. Mass cancellations of airline flights, trade shows, and festivals and events has led to hundreds of thousands of lost room-nights in the hotel industry.

The Hilton hotel chain has reported the virus will carve as much as $50 million from this year’s earnings. Marriott said a main revenue stream in its Chinese hotels fell 95 percent last month.

Ryman Hospitality Properties, which owns hotels and Nashville’s Grand Ole Opry, saw 77,000 room reservations canceled during the week of 9 March, costing it an estimated $40 million in revenue. The company’s $2.5 billion in debt may now be downgraded in quality.

Hotel chains’ stock prices and share values in hotel-oriented REITS are down 11 to 22 percent over the last two months.

New York State has ordered restaurants to seat fewer patrons, so there can be more distance between people. A Seattle restaurant chain is closing 12 of its 13 locales because business has fallen by as much as 90 percent.

Across the U.S., reservations at high-end restaurants are down 20 percent, with the loss reaching 60 percent in virus hotspots.

Italy could see a 75-percent cut in sales by restaurants and hotels, which employ 1.7 million of the country’s people.

“It is the service industry that’s being completely crushed,” said consultant Bruno Rosella. These sales “are not being postponed but lost.”

In New York City and elsewhere, Chinese restaurants are being hit especially hard as patrons worry that employees and ingredients may carry the virus.

Retailers. Walmart, Publix, Stop & Shop, and other retail chains have shortened their hours so employees have time to clean stores and restock shelves. Walmart has said employees’ hours will not be cut.

Clothing chains Urban Outfitters and Patagonia are closing their stores for at least the next two weeks, as is upscale department store chain Neighborhood Goods.

In one U.S. survey, 27.5 percent of respondents said they’ve stopped going to shopping malls, and 58 percent said they will stop if the epidemic worsens.

France has ordered all “non-essential” retail stores to close, permitting only newsstands, pharmacies, and grocery stores to do business.

Italy has ordered all retail businesses closed, exempting only pharmacies and food stores. Retailers and their supply chains make up 12 percent of the country’s GDP and 14 percent of its workforce.

Sport shoes. Sport shoe giant Adidas warns the virus outbreak in China could cost it $1.1 billion in first-quarter sales and a $550 million reduction in operating profits. China accounts for 23 percent of Adidas’s sales, which were off 85 percent over three weeks in February. As the crisis eases, people will be more interested in restocking their refrigerators than upgrading their sneakers, the company said.

Analyst James Grzinic at Jeffries noted that “the virus hit is worse than feared.”

In the U.S., Major League Baseball, the National Basketball League, and National Hockey League all have suspended operations.

During 2019’s NBA season, television outlets collected $600 million in ad revenues and another $972 million during the playoffs, according to market research firm Kantar.