“CORONAVIRUS: POLITICAL LEADERS ON THE WARPATH” 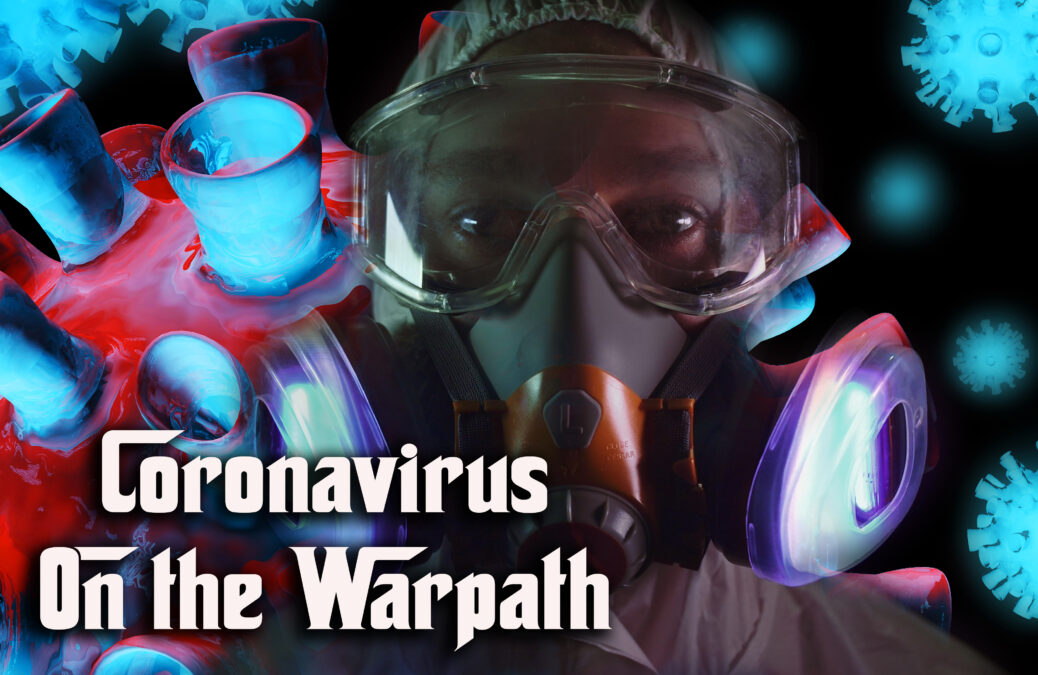 Since it first appeared this past December, COVID-19, which to date has killed some 17,000 in a global population of 7.7 billion, has now been declared a “war” by political leaders worldwide.

Last Wednesday, President Trump was asked by a reporter if he considered the country to be on a “war footing” in terms of fighting the virus. Trump replied, “It’s a war. I view it as a, in a sense, a wartime president.”

“This is a war,” said President Trump on Sunday, announcing he was activating National Guard units in New York, California, and Washington State to help fight the coronavirus, which he has repeatedly referred to as the “invisible enemy.”

Last Friday, President Trump invoked “emergency war powers” to increase the manufacturing of needed medical supplies… which the United States is woefully unprepared for. Beginning with NAFTA and accelerating with China’s admittance into the World Trade Organization in 2001, corporations have outsourced previously “Made in USA” products to cheap labor markets.

On 14 March, Vice President Joe Biden, when asked a question about coronavirus during the debate with Bernie Sanders, responded, “This is a crisis. We’re at war with a virus… In a war, you do whatever is needed to be done to take care of your people.”

On 16 March, New York City mayor Bill de Blasio described his vision of the virus issue: “We have to understand this as a pure war footing.” Two days later, he phoned General Mark Milley, Chairman of the Joint Chiefs of Staff, to discuss military options for dealing with the coronavirus.

“We had a detailed conversation about the capacity that the armed forces could bring to bear to address a crisis like coronavirus and we went over details in terms of different options of what the military might be able to provide.”

In France, last Monday, French President Emmanuel Macron addressed his nation with the words, “We are at war… The enemy is invisible and it requires our general mobilization.” He has ordered citizens to be in “lockdown mode,” only allowed out their homes to buy food and medicine.

In Britain, Prime Minister Boris Johnson stated last Tuesday, “We must act like any wartime government and do whatever it takes to support our economy.”

In her media address to the nation last Wednesday, German Prime Minister Angela Merkel proclaimed, “Since the Second World War, there has been no challenge to our nation that has demanded such a degree of common and united action.”

On Sunday, Prime Minister Pedro Sánchez of Spain declared, “Europe is at war… we have to respond with our weapons.”

Stoking fear and joining the battle hymn against coronavirus, here are some representative samples of recent headlines:

TRENDPOST: As Gerald Celente has long noted, “When all else fails, they take you to war.”

As evidenced, war has again been declared; the war drums are beating and the masses march in line.

Whether lying them into wars such as Vietnam and Iraq or the longest war in American history, Afghanistan, with the war on COVID-19, so, too, are the proclamations from “leaders” based on erroneous facts, ignoring readily available facts.

According to scientific data, virtually all who have died from the virus are older adults with chronic health problems. For the rest that have been infected with the virus, most have experienced only mild symptoms, such as fever and coughing and almost everyone recovers.

Yet, the mass hysteria generated by the mainstream media and politicians dominates, and those who challenge the powers that be have been blacklisted from the media, just as they were when challenging the lies that Saddam Hussein had weapons of mass destruction. These facts were long detailed in previous issues of the Trends Journal.

TREND FORECAST: From North America to South America, Europe to Asia, nations around the world have called in the military and have imposed, by any other name, Martial Law in the name of fighting the COVID-19 War.

Italy and Spain are in total lockdown. Germany has banned more than two people to gather in public. France mobilized 100,000 police and gendarmes to enforce confinement laws, fining anyone leaving the house without a required form up to €135 for those who don’t comply.

Yesterday, Prime Minister Boris Johnson of the UK announced the imposition of the most restrictive rules since World War II, locking down the nation and ordering the police break up any public gatherings and levy substantial fines for anyone breaking the rules.

“From this evening I must give the British people a very simple instruction – you must stay at home,” Johnson said.

In the United States, as with other nations, politicians have made up stringent “social distancing” rules and regulations, how many people can come in your house, who can go to work and who can’t… and the people obey or suffer the consequences… the list of countries clamping down on freedom goes on and on.

As for violations of the Constitution, Bill of Rights, and doctrines of nations granting liberty and justice to all, a complicit mainstream media ignores the blatant violations of political leaders who lock people in their homes, close down business, put hundreds of millions out of work, and ban public gatherings.

There is virtually no dissent. Mass protests by the people are prohibited: COVID-19 = Orwell’s 1984.