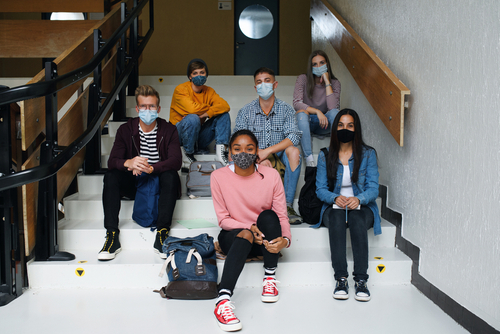 The Associated Press reports, on 15 December, that colleges across the U.S., which had considered themselves on the verge of a return to normalcy, are reacting to the Omicron variant of COVID-19 with a return to precautions such as online classes, limited social gatherings, and mandating virus testing, mask-wearing and booster shots.

Examples include Cornell University, which moved final exams online and shut down all campus activity in response to 883 students testing positive in about a week, including "evidence" of Omicron in a "significant" number of samples. The school's president said it was important to "follow the science" in order to protect students, faculty and staff. Vaccinated students, including those who had received booster shots, accounted for almost every case where Omicron was detected.

Of all the students who tested positive for COVID-19, as of 14 December, Cornell "has not seen severe illness."

Similar reactions occurred at Princeton (which urged students to leave campus "at their earliest convenience") and New York University; at all three schools, more than 98 percent of students had already been vaccinated.

Syracuse University also reinstated precautions "until we know more" about the Omicron variant, including requiring booster shots for students and employees before the spring term, and a possible extension of an existing mask mandate.

More than 30 other colleges are requiring booster shots and more are contemplating such requirements. The Centers for Disease Control and Prevention recommends boosters for those 17 and older, and Pfizer has announced that a booster of its COVID-19 vaccine might offer protection against Omicron, even though the initial two doses appear less effective.

TRENDPOST: Are you getting this? The first two doses of Pfizer's vax have offered little protection from a variant that so far poses only the most minuscule risk of serious illness, so go ahead and get a third dose! And as we note in quoting the CNBC Cramer Jim Clown, he got three jabs and still got COVID. See: "OMICRON: WE DON’T KNOW IF VACCINES ARE EFFECTIVE, BUT YOU MUST TAKE THE JAB" (7 Dec 2021).

While many schools are postponing returns to campus and going to online classes and exams, when students at Stanford University return to campus in January they'll be tested weekly, wear masks and be barred from holding parties or large gatherings for two weeks.

TRENDPOST: Who decides that two weeks is the time frame for banning social gatherings? Why not one week, or three? Where's the "science" behind these rules? It certainly seems that Gerald Celente is correct in saying "They just make this stuff up as they go along"; see "FORGET THE FACTS: MAKE UP RULES" (23 Jun 2020).

Epidemiologists who aren't in thrall to the Drug Lords or a political agenda make the case that a highly-transmissible but far less dangerous variant, such as Omicron (which, so far, appears to have caused, at tops, seven deaths worldwide!), might be the key to achieving widespread natural immunity; see "DON'T LOCK DOWN, DOCS DEMAND" (20 Oct 2020). But it is proving far too valuable as a means of continuing to manipulate and control people by keeping fear alive.