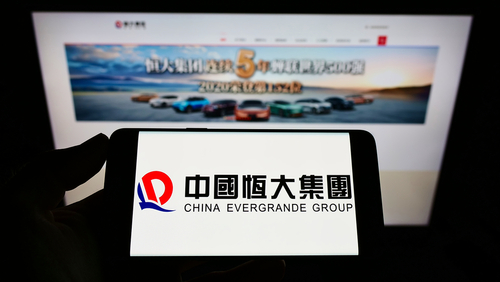 Chinese real estate giant Evergrande, with 200,000 employees and more than 1,300 residential developments across the country, owes $300 billion and has warned investors that it might have no alternative but to default.

That announcement brought investors literally to the company’s doors, demanding their money back, and jolted analysts and the real estate industry to worry that China’s housing market might face a 2008-style collapse that could ripple around the world.

The news also sent the Dow Jones Industrial Average down more than 800 points during Monday’s trading.

Evergrande’s woes are a harbinger.

Markets also are pricing in a significant default risk for other developers such as Fantasia Holdings Group and Guangzhou R&F Properties, The Wall Street Journal noted.

At the same time, the government reported home sales by value dove 19.7 percent in August, year on year, the steepest plunge since April 2020.

Construction starts also fell, down 3.2 percent from January through July.

The news has beaten down share prices from real estate companies, with some down more than 3 percent.

The real estate market’s troubles stem, in part, by the government’s attempts to pare back the huge amounts of money that developers have borrowed.

“Markets should be prepared for what could be a much worse-than-expected growth slowdown, more loan and bond defaults, and potential stock market turmoil,” he noted, adding that real estate makes up about a quarter of China’s economy.

Evergrande’s difficulties could be a trailing indicator.

In June, 4.3 percent of property loans at the Industrial and Commerce Bank of China were nonperforming, almost doubling from 2.3 percent six months earlier.

The rise in bad loans will become alarming if home prices fall, reducing the value of collateral developers have pledged to back their loans, bank analyst Shujin Chen at securities dealer Jeffries, told the WSJ.

Also, the median gross profit margin of Chinese real estate developers slipped from 26.6 percent to about 22 percent now, according to a Goldman Sachs study.

Moody’s Investors Services recently flipped its rating on the Chinese property market to negative and said sector sales could fall 5 percent in the next six to12 months and prices likely will rise more slowly.

Investors, analysts, and policymakers must now learn to balance not only the U.S. and Europe in their strategies, but also to incorporate China, with its dual circulation policies and quirky combination of laissez faire and communist authoritarianism.

While the Evergrande Group debacle is still rattling markets, (China and South Korea were closed on Tuesday for a holiday), we forecast the communist government will do what it needs—and wants—to keep the Evergrande liquidity crisis from crashing equity markets and bringing down the economy.

Of course, the Chinese housing bubble has been long building, and Evergrande may be the event that could pop it.