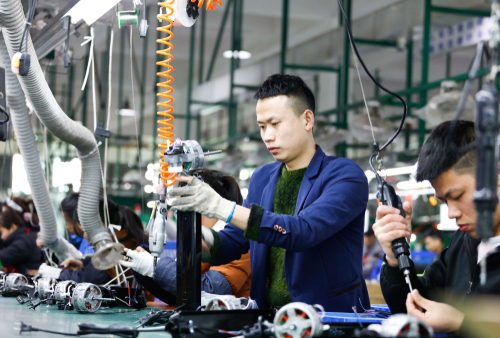 Shortages of power and high prices for raw materials shrank China’s factory output in October, while the services economy continued to expand, the National Bureau of Statistics (NBS) reported.

Factories’ productivity and demand for their products both declined last month, the bureau said.

The manufacturing sector’s purchasing managers index slipped from 49.6 in September to 49.2 in October; readings below 50 are signs of contraction.

However, high-tech and equipment manufacturing both countered the downward trend in October, posting PMIs of 52 and 51.2, respectively.

Large enterprises showed a collective PMI of 50.3, while the gauge for small and medium manufacturers came in at 47.5  and 48.6, respectively.

The PMI for small factories has signaled contraction for six consecutive months, highlighting the particular difficulties small businesses have in managing shortages and higher costs.

With the slower recovery of major world economies and complicated global economic and trade situation, the imports and exports situation in the manufacturing sector remains uncertain, Zhao said.

October’s PMI for China's services businesses clocked in at 52.4 in October, down slightly from 53.2 in September but still positive.

Businesses in travel, leisure, and entertainment all registered PMIs above 55, due to China’s week-long National Day holiday in early October.

During the week, holiday-makers tended to stay home or make short trips because of bad weather and fear of the COVID virus, Zhao said, weakening the month’s financial performance of airlines and railways.

In October, China's construction industry continued strong with a PMI of 56.9, despite the widely reported troubles of Evergrande, Fantasia, and other large developers (“Spotlight China. Crash Coming? Recovery Ahead?” 19 Oct 2021).

As part of the plan, Beijing is working to strengthen consumer spending on domestic products to be in balance with manufacturing to give the economy two equally strong facets. Currently they are relying heavily on factory exports, while importing consumer products.