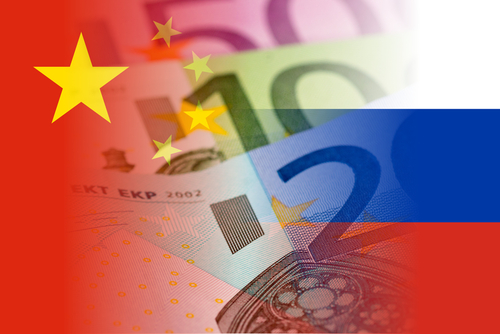 Despite the weeks of pressure from the U.S. and European countries for Beijing to take a firmer stance against Russia for invading Ukraine, the Chinese have made it perfectly clear that not only will they refuse to criticize Moscow for the invasion; they blame the West for having set the stage for the war.

China was warned by the European Union at a summit on Friday that its ties to Russia and unwillingness to condemn the invasion could have negative consequences.

“We exchanged very clearly opposing views… China has an influence on Russia,” Ursala von der Leyen, the European Commission president, said after a video call with Chinese President Xi Jinping and a top official. “And therefore, we expect China to take its responsibility to end this war” by urging a resolution.

The EU leader said Beijing would suffer “reputational damage” if it continues to avoid speaking out against the Ukraine War.

China itself has concerns that European countries are taking harder-line foreign policy cues from the U.S. and has called for the EU to "exclude external interference" from its relations with China.

Xi took a swipe at the influence that the U.S. wields in Europe and urged an “independent policy toward China.” He also warned that the U.S. has adopted a “cold war mentality” over the crisis.

Xinhua news agency reported that Xi identified “regional security conflicts” as the “root cause” of the conflict.

TRENDPOST: The Trends Journal has reported extensively about the pressure campaign by the U.S. and allies against China.

China seemed to remove any doubt last week that it would turn its back on Russia and went even further, saying it would like to bring the relationship to “a higher level.”

“The Ukrainian issue… is not only the outbreak of the long term accumulation of security conflicts in Europe but also the result of the Cold War mentality and group confrontation,” Wang Yi, China’s foreign minister, said, according to the Financial Times. “In the long run, we should learn the lessons of the Ukraine crisis, respond to the legitimate security concerns of all parties based on the principles of mutual respect and indivisibility of security.”

TRENDPOST: As we have long forecast, the 20th century was the American century—the 21st century will be the Chinese century. The business of China is business; the business of America is war. (See “TOP TRENDS 2021: THE RISE OF CHINA.”)

We have reported that Chinese Foreign Minister Wang Yi said Beijing stands on the right side of history over the Ukraine crisis and “will never accept any external coercion or pressure, and opposes any unfounded accusations and suspicions against China."

As we have pointed out, the U.N. General Assembly voted on 2 March on a resolution slamming the Russian invasion. A total of 141 countries voted in favor and 35 abstained, including China and India. Five countries voted against the measure, including Belarus, North Korea, Eritrea, Syria, and Russia.

Russia and China’s budding relationship has some analysts questioning how deep the foundation goes, and the FT’s report pointed out that there may already be some cracks.

For example, after a meeting last week between top Chinese officials and their Russian counterparts, the Kremlin announced that the two countries criticized the sanctions that have been imposed on Moscow, but China’s statement made no mention of the sanctions.

The West is concerned that an alliance is emerging between Russia and China and that Beijing would help prop up the Russian economy.

President Joe Biden mentioned an emerging ‘new world order’ earlier this month that he said must be led by the U.S.

It seems Russia and China have different views of the future.

"We, together with you [China], and with our sympathizers will move towards a multipolar, just, democratic world order," Lavrov said in a video statement.

Wang Wenbin, a Chinese Foreign Ministry spokesman, said there was “no ceiling” for their relationship and goal to “to safeguard security and no ceiling for us to oppose hegemony,” a clear swipe at the U.S.

Steve Tsang, director of SOAS China Institute at the University of London, told CNN prior to Lavrov’s visit that Xi likely wants a strong relationship with Russia but he is not willing to “pay a significant price to do so.”

Tsang said the Kremlin is also likely realistic that the relationship does have limitations.

Reuters reported that it is China’s concern that the EU is letting the U.S. influence a “harder-line foreign policy.”

One official told the wire service that a quarter of China’s global trade was with the EU and the U.S. last year. And just 2.4 percent was with Russia.

TREND FORECAST: We maintain our forecast that the Ukraine War has strengthened the Chinese/Russian relationship, and Beijing sees NATO/US involvement in supporting Ukraine with military arms and sanctions to fight Russia as a precursor to the actions the alliance will take against China when it moves to take over Taiwan.