CHINA SIDES WITH RUSSIA IN CLASH WITH WEST. WILL THE BOTTOM LINE LIMIT SUPPORT? 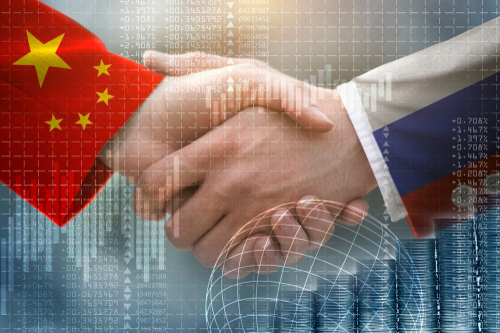 Russian President Vladimir Putin’s visit earlier this month to Beijing to help Chinese President Xi Jinping kick off the opening ceremony of the Winter Olympics was viewed by many in the media as an effort by the two to show a united front against the West.

CNN ran a headline, “CHINA’S WINTER OLYMPICS MOMENT IS BEING OVERSHADOWED BY ITS ‘BEST FRIEND’” and The New Yorker’s article was titled, “RUSSIA AND CHINA UNVEIL A PACT AGAINST AMERICA AND THE WEST.”

Robert Daly, the director of the Kissinger Institute on China and the United States, at the Wilson Center in Washington, told the magazine that the pledge between the two countries illustrates that they will stand “shoulder to shoulder against America and the West, ideologically as well as militarily.”

“This statement might be looked back on as the beginning of Cold War II,” he said.

But Xi’s actions since the meeting have caused some political observers to wonder just how far Beijing is willing to support Russia if there is an invasion of Ukraine. Xi told French President Emmanuel Macron in a phone call Wednesday that he hoped the situation in Ukraine could be solved diplomatically.

Some have pointed to reports that China has already assured Moscow that any revenue it stands to lose in sanctions with the West, could cause less of an impact with the help of Beijing.

“It’s one thing for China to back Russia in opposing NATO enlargement, as it costs nothing,” Sergey Radchenko, a professor of international relations at Johns Hopkins University in Bologna, told the paper. “It’s quite another for China to help Russia evade the economic sanctions it would face if it invades Ukraine.”

The Wall Street Journal, citing unnamed sources, reported that Xi has been meeting with his seven-member Politburo about the appropriate next steps. (Xi has denied recommending against an invasion during the meeting with Putin at the Olympics.)

The paper pointed out that one of the Chinese Communist Party’s founding principles is to avoid international conflict at all costs and meddling in outside conflicts.

Wang Wenbin, the Chinese foreign ministry spokesman, downplayed claims from Biden that a Russian invasion is all but certain. Wang said the credibility of the U.S. intelligence community “has been tested on many occasions, including Iraq and Ukraine.”

He said China would like to see a political resolution and “nobody should put up a smokescreen of war and use it as leverage, or threaten others with sanctions and pressure, still less resort to the means of inciting bloc confrontation.”

His comment on sanctions was a thinly veiled swipe at President Joe Biden who warned Putin against invading. “He’s never seen sanctions like the ones I will impose,” Biden warned.

Wang said every effort should be made “on the basis of the Minsk II agreement to properly treat the reasonable security concerns of all sides.”

The 2015 agreement was brokered at the time by France and Germany and called for the immediate withdrawal of heavy weapons by both sides and a ceasefire monitored by the Organization for Security and Cooperation in Europe (OSCE).

The Associated Press called the agreement a coup by Moscow because Ukraine is obligated to grant a special status for the Russian separatist regions in the county that allows them to form their own police force and appoint their own judges.

Ukraine has accused Russia of not pulling back its forces in these regions, which Moscow has denied. Macron called the Minsk deal last month “the only path allowing us to build peace…and find a sustainable political solution.”

TREND FORECAST: We maintain our forecast of “The Rise of China” as one of the Top Trends of 2021. We predicted that the 21st century will be the Chinese century because the business of China is business; the business of America since World War II has been war.

The Diplomat reported back in 2018 that China looked to gain a foothold in Ukraine shortly after Russia’s seizure of Crimea and the beginning of the secessionist conflicts in Donetsk. The report said China competed “aggressively” with Western partners for partnerships in Kyiv.

The magazine said Ukraine, at times, runs into roadblocks with Western countries concerned about corruption and then can turn to China.

“We aren’t actively targeting China for foreign direct investment,” a top economic advisor to the former Prime Minister Volodymyr Groysman told the magazine. “We’re prioritizing Germany, France, and the United Kingdom. But if China wants to come here and improve our ports and railways and build our roads, why would we stop them?”

Both China’s manufacturing abilities and tech innovation were at third-world levels before Bill Clinton and George W. Bush brought the communist nation into the World Trade Organization at the turn of the century.

It was U.S. and European companies that exported their manufacturing facilities and high technology to China so they could use its cheap labor to make their products... and sell them back to the citizens around the world at much higher prices so they could boost their profit margins.