CHINA AND RUSSIA SOLIDIFY THEIR BOND 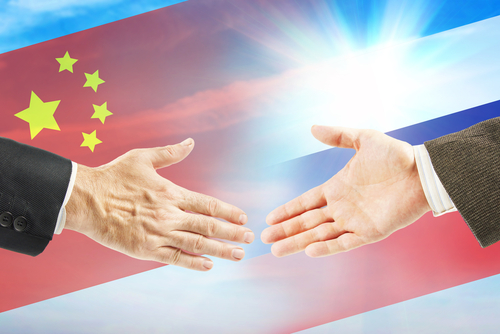 Russian President Vladimir Putin and Chinese President Xi Jinping spoke on the phone Wednesday in what international observers saw as an example of the close bond between the two countries.

The Trends Journal has reported that the relationship between China and Russia has vexed the U.S. since the onset of Moscow's 24 February invasion of Ukraine.

China was accused of trying to play it both ways: deepening ties with Russia while remaining ambiguous about the invasion so as to not isolate itself from the European and U.S. market. (See “WAR IN UKRAINE ECONOMIC OVERVIEW,” “SPOTLIGHT CHINA: EAST VS. WEST,” “BEIJING: STOP WESTERN SANCTIONS ON RUSSIA” and “CHINA STANDS WITH RUSSIA. TELLS E.U. AND U.S. FU!”)

The relationship between China and Russia is a blossoming one, and there are questions about how deep it runs. It is widely believed that Putin informed his Chinese counterpart about his intention to invade Ukraine during their meeting at the Opening Ceremony of the 2022 Winter Olympics in Beijing.

Senior U.S. officials told The New York Times that China had “some level of direct knowledge about Russia’s war plans or intentions” before the invasion. The countries released a 5,000-word statement after the meeting to praise their partnership that has "no limits."

The phone call between Putin and Xi occurred on the Chinese leader’s 69th birthday, which some saw as an example of their personal closeness.

"The Chinese side stands ready to work with the Russian side to push for steady and long-term development of practical bilateral cooperation," Xi said.

Xi said trade with Russia over the first half of this year has been [in the tens of billions of U.S. dollars] and we “can expect new records in upcoming months, which is a testament to the great cooperation between our two nations.”

CNBC, citing China customs data, reported that trade between China and Russia totaled $65.81 billion in the first five months of this year, which is up 28.9 percent from a year ago.

“China is willing to push for the steady and long-term development of bilateral pragmatic cooperation. China is willing to mutually support Russia on core interests and matters of paramount concern, such as sovereignty and security, as well as [achieve] closer strategic cooperation,” Xi was quoted as saying by the state broadcaster CCTV, Politico reported.

The Wall Street Journal reported that China and Russia had slightly different readouts after the phone call. China stayed true to its earlier comments about finding a peaceful settlement in Ukraine, but did not criticize Russia's decision to invade. Moscow’s readout indicated that Beijing supported Russia’s decision.

The Kremlin said Xi pointed out the actions taken by Russia were intended "to protect the fundamental national interests in the face of challenges to its security created by external forces.”

TREND FORECAST: It’s no surprise that Putin and Xi are forming a closer bond. Xi is experiencing some of the same pressures in China that his Russian counterpart faced when it came to NATO expansion.

There is an upcoming NATO meeting on 29 June in Brussels and guess who’s on the guest list? Australia, Japan, New Zealand, and South Korea.

Sen. Ben Sasse, a Republican from Nebraska, said the U.S. should create a "Pacific NATO."

"Let's build a NATO for the Pacific," Sasse said in his address at the Ronald Reagan Presidential Library in California last Thursday, according to Nikkei Asia. "We need allies to get back on the offensive against the CCP, and those allies need U.S. leadership," he said.

He continued, “NATO in Europe has been the greatest treaty organization in history. It held the line against the Soviets, and it's now holding the line against bloody [Vladimir] Putin. But as Chairman Xi [Jinping] looks to expand his sphere of influence, we need a new military alliance centered far out into the Pacific.”

We are led by madmen and madwomen who are going to start WWIII. Xi knows that the U.S. wants to surround China so having a major military power like Russia is beneficial for Xi.

We maintain our forecast that the U.S. and NATO cannot defeat Russia or China in a war, let alone both forces combined.