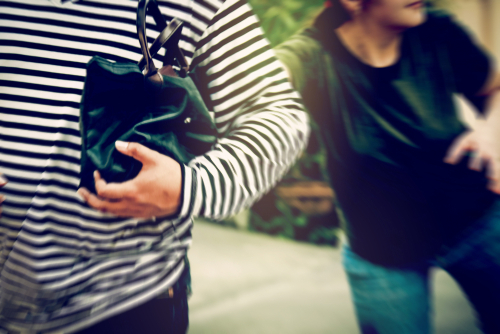 Everybody already knows it's a rare day that Chicago doesn't experience multiple deadly shootings. But there's still the perception that most of those are gang-related, and that most of the city's neighborhoods are still safe for those not involved with gangs or criminal activities.

But that perception is now coming face-to-face with a crime wave that permeates even the areas thought least likely to be dangerous.

The city's Mag Mile (short for Magnificent Mile), the stretch of North Michigan Avenue that was downtown Chicago's retail showplace, once boasted more than 450 retailers, including many flagship stores, and more than 275 restaurants, with almost everything within walking distance of the city's best hotels.

Now Macy's and Disney are among those that have pulled up stakes and left, and those are far from the only stores left vacant on the formerly bustling and thriving thoroughfare.

As reported on 20 October by CBS 2, continuing retail thefts and robberies on the Mag Mile are behind the Chicago police issuing a formal warning. That warning (which describes suspects only as young men in their teens) confirms the suspicion that the area, like the city at large, is not safe. On a street that had new stores opening all the time, commercial brokers are reporting that prospective tenants are now reluctant to move in.

We Told You So

When politicians launched the COVID War and destroyed the lives and livelihoods of countless millions, Gerald Celente had forecast that when people lose everything and have nothing left to lose, they would lose it.

And from homicides to shoplifting, they’ve lost it.

Shoplifting, one committed furtively by individuals, is now often carried out brazenly by organized rings, much like what's been seen of late in San Francisco; see "CRIME WAVE SPIKES, DRUG STORES CLOSE" (19 Oct 2021). And, as Trends Journal noted, Chicago's retail crime wave, like San Francisco's, can be laid at the feet of a prosecutor reluctant to make an example of those apprehended, thus giving the criminal element the distinct impression that there are no consequences to be suffered.

Like San Francisco's district attorney, Chesa Boudin, Cook County State's Attorney Kim Foxx recently raised the threshold for felony retail theft charges to $1,000, and her office is less than zealous about prosecuting misdemeanors. So, like in San Francisco, organized crews in the Windy City can sweep store shelves clean of merchandise with impunity. Foxx's office isn't helping much in the violent crime category, either; so far this year, of 82 gun cases on the Mag Mile and its environs, only 29 were prosecuted and only 23 yielded convictions.

TRENDPOST:  As Trends Journal has noted, Kim Foxx and Chesa Boudin are part of a disturbing trend in which "rogue prosecutors" in America's big cities are "fundamentally transforming" the criminal justice system by being deliberately soft on crime: declining to prosecute crimes including shoplifting, drug offenses and public nuisance violations, and in many cases doing away with bail and releasing repeat offenders over and over again.

As we wrote in the 19 October 2021 Trends Journal, Mr. Chesa Boudin, is one of a cadre of "rogue prosecutors" around the country (others include George Gascon of Los Angeles, Marilyn Mosby of Baltimore and Kim Foxx of Chicago).

The aim of these elected (!) prosecutors is to fundamentally transform the criminal justice system, in large part by declining to prosecute many crimes, including shoplifting, drug offenses and public nuisance violations (which is why, in San Francisco and Los Angeles, streets are now awash in homeless people who strew trash, used hypodermic needles and feces everywhere, with impunity). They also oppose bail, and are responsible for many repeat offenders being released again and again.

So any legal deterrent to crimes like shoplifting has been removed; the security guards don't lift a finger because they know that, even if arrested, the criminals will resume plying their trade in short order; and the criminals know that all too well.

And just who is Chesa Boudin? He should be no stranger to readers of Trends Journal. He has quite a pedigree; see "OLD FASHIONED CRIME ON THE STREETS OF SAN FRANCISCO" (20 Jul 2021).

TREND FORECAST:  As inflation and economic stresses—brought on, in large part, by the COVID War—increase, so will homelessness, mental illness, drug use and crime. As Gerald Celente says, "When people lose everything and have nothing left to lose, they lose it," and especially in areas where officials encourage and exacerbate the problems with their anti-victim, and anti-police agendas.